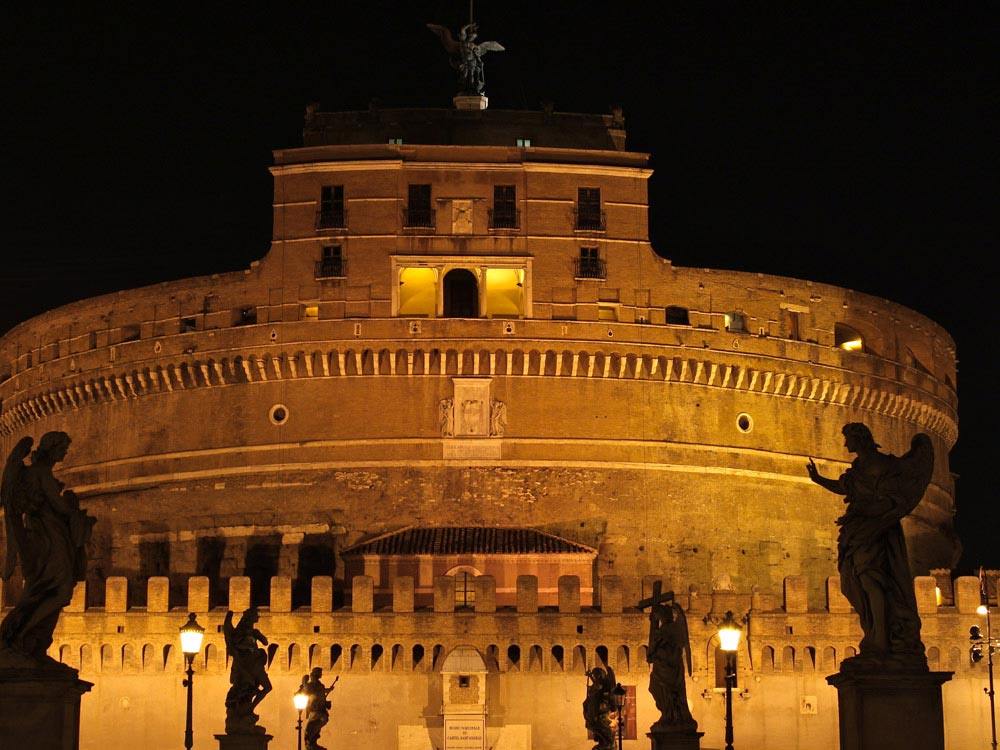 Castel Sant’Angelo or the Mausoleum of Hadrian at Night

The Mausoleum of Hadrian in Italy is popularly referred to as the Castel Sant’Angelo. This gigantic towering cylindrical building in Rome was originally constructed by the Roman Emperor Hadrian as a mausoleum for himself and his family. It served as a fortress and a castle for more than thousand years, and presently it has been transformed into a museum. The Castel Sant’Angelo is considered as one of the premier tourist attractions in Rome, and remains packed with tourists throughout the year.

The cylindrical mausoleum built by the Emperor Hadrian on the Tiber River was converted into a military fortress before the Pope fortified it in the 14th century. Presently, it is known as the Museo Nazionale de Castel Sant’Angelo, and it is one of the most fabulous sights in Rome. This historical site also boasts of a colorful history that is more intriguing than most of the monuments of the city of Rome.

Initially the cylindrical tomb was topped with statues which symbolically represented the grandeur of the Emperor and his dynasty. The visitors could walk up the wide spiral passage inside, which was especially designed for the ascent of the funeral cortege. After a century and a half, the tomb was merged into the Aurelian Wall.

All through the middle ages, the Castel Sant’Angelo was captured by several warring Roman families, and the fortress was acquired by the papacy in 1377. The popes took the initiative to transform the building into a technically-advanced and unconquerable citadel to which they could retreat during times of unrest. A covered passageway, the Passetto del Borgo still links the Castel Sant’Angelo to the Vatican.

Presently, the travelers can explore the legacy of all three uses of the monument: the funeral passage of Hadrian, the defensive battlements and the magnificently-frescoed interiors. The Castel Sant’Angelo also hosts special events during the summer season. Here you can enjoy medieval warfare displays and folk music recitals and chill out at the bar on the highest terrace which also offers a spectacular view of the city. 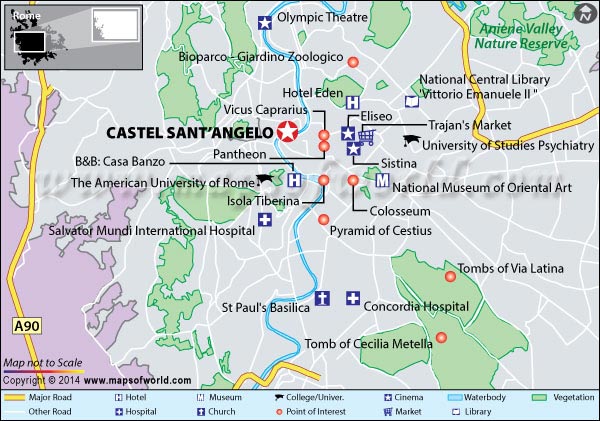 Where is Castel Sant'Angelo?

Castel Sant’Angelo is located in Parco Adriano in Rome, Italy. It is around 34 km away from the Rome Airport in Via della Scafa, Fiumicino, Rome.

Autumn (September to early November) is the perfect time to visit Rome as the weather is warm and temperatures are very mild.

The Castel Sant’Angelo remains open from 9:00 am to 4:00 pm, from Tuesdays to Sundays.