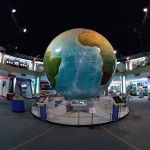 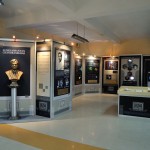 An exhibition on life and works of Subrahmanyan Chandrasekhar was held at Science City, Kolkata 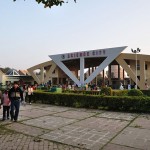 The Science City in Kolkata was conceptualized around 1996 and fully opened to the public by the middle of 1997. In the wake of the super-hit 1993 Spielberg film Jurassic Park, a renewed interest in the wonders of science was created, especially among the younger generation. By 1996, the time was ripe to open a Science Center in Kolkata. The simmering idea to open an institution that would promote ‘public understanding of the culture of science and technology’ finally came to fruition with the opening of the ‘Science City Kolkata’.

When the Science City was opened amid much fanfare, discounted tickets for Nicco Park were given to anyone who visited the Science City and a bus shuttled visitors from one venue to another.

The Science City is divided into two parts- the Science Centre and the Convention Centre. The Science Centre has all the fun and educative shows and displays. The Convention Centre comprises huge fully furnished spaces for gatherings. There is the Grand Theatre with a seating capacity of more than 2000, a Mini Auditorium that seats around 400 people, and a Seminar Hall Building with eleven halls- their capacities ranging from 15 to 100.

Each of these sections again house several science exhibits, 3D shows and film theaters. While designing these shows and exhibits the interest level and attention span of school children have been kept in mind. Hence the typical solemn, if somewhat grim ambience that pervades science museums in general, is happily missing from this place. Some attractions here that are all-time favorites of visitors are the Space Theatre, Planetarium, 3 D Vision Theatre, and Time Machine.

The Space Theatre screens a wonderful film Antarctica: An Adventure of a Different Nature, which takes the viewer through what land and sea life in the coldest region on earth looks like. Then there is the 3D Theatre- a big hit with guests. The Time Machine, a motion simulated ride that gives viewers the impression of moving through planets, is another wonderful attraction.

Since the place has been built keeping families and children in mind, there s a huge picnic area where you can bring food from home and enjoy. Parking too is not a problem since the parking area can accommodate at least a 1000 cars.

By Air: The nearest international airport is Netaji Subhash Chandra Bose International Airport. From there a visitor can take a cab and reach Science City in around half an hour via the VIP Road and EM
Bypass.

By Train: From the Howrah Railway Station, it will take a visitor approximately half an hour to reach Science City via NH 117. The total distance is 15.4 km ( about 9.6 miles).

Kolkata and all its attractions are best visited during the winter months of November to February. The shoulder months of March and October are also not bad to plan a visit. During peak summer season, visits to Kolkata should ideally be avoided, owing to humidity and heat.

Science City is open every day of the week (including Sundays and public holidays) from 9 a.m. to 9 p.m. Science City remains closed on Holi.

Ticket rates vary for different individuals. An organized group of 20 or more pays a lower fee than individuals, school groups pay a lower rate than organized groups, and under-privileged sections of the society pay a very small fee of Rs 5 only.

Entry rate for an individual is Rs 40 per person, while tickets to attractions inside the Science City need to be bought separately. On an average, a person who enjoys all the rides and shows can expect to spend anywhere between Rs 250 to Rs 300 on the tickets, including entry fee.