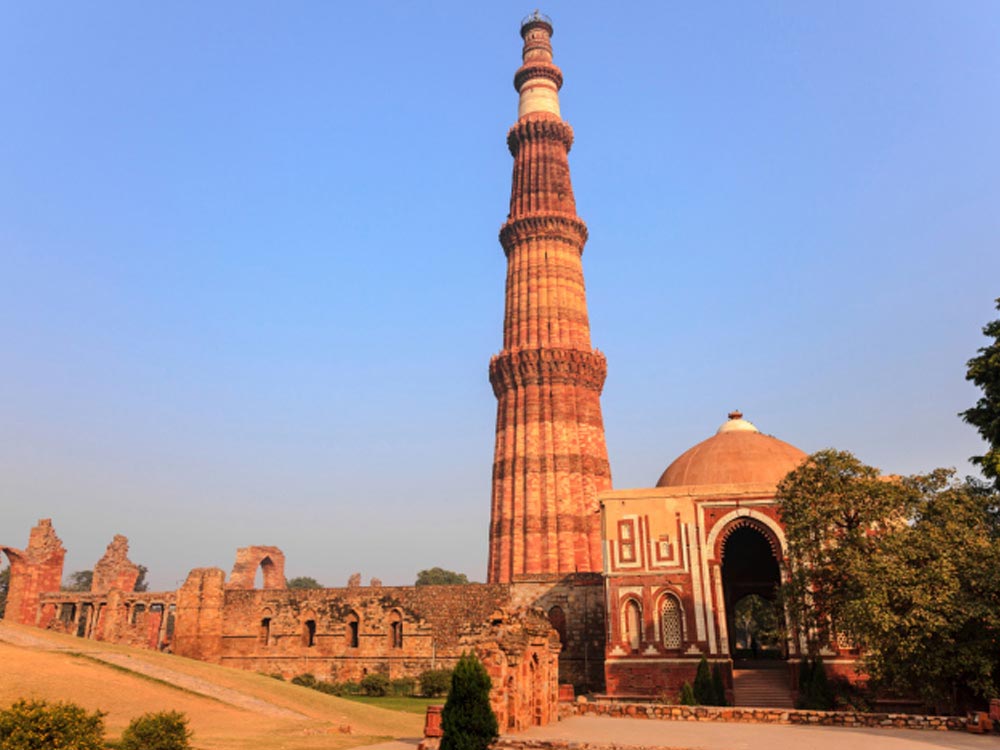 Qutub Minar is the highest stone tower in India

In 1198 AD, Qutub-ud-din-Aibak built the Qubbat-ul-Islam Mosque to the northeast of the present Qutub Minar. Around 1202, Qutub-ud-din Aibak constructed the Qutub Minar. The reason for the construction of this monument is not known. Some historians opine that it was constructed as a victory tower, while others say its just a minaret to the adjacent mosque. Some people believe that it was used as a tower by the muadhdhins to call the faithful to prayer.

Only the first storey was finished by Qutub-ud-din, while the rest of the storeys were raised by his successor who was also his son-in-law, Iltutmish (1211-36 AD). Firozshah Tughlaq built the two circular stories in white marble in 1368. Its protruding balconies with inscriptional decorative bands on different storeys enhance its appearance.

With a height of 72.5 m and 379 stairs, it is the highest stone tower in India. It is also one of the Delhi’s recognized landmarks.

The Qutub Minar has an orthogonal courtyard confined by cloisters and carved columns of the Jaina and Hindu temples pulverized by Qutbu’d-Din Aibak. This fact has been documented as an inscription on the main eastern gate of the monument. An inscription in Sanskrit on one of the walls of the Qutub Complex, mentions that the Qutub Minar was called Vishnupada. It was constructed around the 4th century AD.

There is an Iron Pillar in the Qutub Minar complex that bears an inscription in Brahmi script. The inscription reads that the pillar was constructed as a Vishnudhvaja on Krishnapada hill in memoriam of a mighty king named Chandra. The Iron Pillar’s resistance to rust is perplexing the scientists.

The Qutub Minar suffered damage due to earthquakes and lightning strikes on various occasions. Thus, it was renovated from time to time by various rulers.

The Minar has a tilt of just 25 cm from the vertical which even though it is safe, yet needs monitoring to avoid weakening of the foundation of the monument due to rainwater seepage.

Prior to 1981, the general public was allowed access inside the monument. However, an accident of rare seriousness (the death of 45 people during a stampede, following a power cut in the tower on 4 December, 1981) led to the authorities forbidding the public access to the interior section. 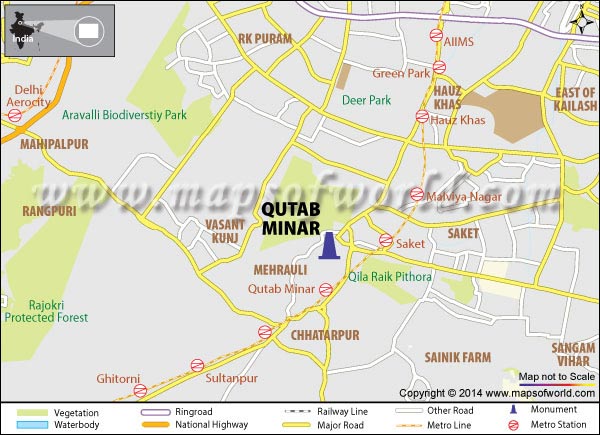 Located in Mehrauli, New Delhi, India, the Qutub Minar is just 10.8 kms. away from Indira Gandhi International Airport. New Delhi Railway Station is just at a half-hour drive from the Minar. You can take a cab from the airport and railway station to reach the Minar. The monument is well connected by a fine network of roads. You can also choose to travel in a bus as several private and government buses offer sound connectivity. Qutub Minar is the nearest station of the Delhi Metro. It takes around a half an hour to reach the monument from the Jama Masjid.
Address :  Qutub Minar Address: Mehrauli, New Delhi, DL 110030

The Qutub Minar is open throughout the year. However, the months of October through March are the best for visiting Qutub Minar as the weather is pleasant during these months.

The visiting hours of the Qutub Minar are from sunrise to sunset.

For Indians the entry ticket costs INR (Indian Rupee) 10, while for foreigners it is INR 250. Children under 15 years of age are allowed free entry.

What are the threats to the monument?
Planes taking off or landing at the Indira Gandhi Airport pose threat to the Qutub Minar.