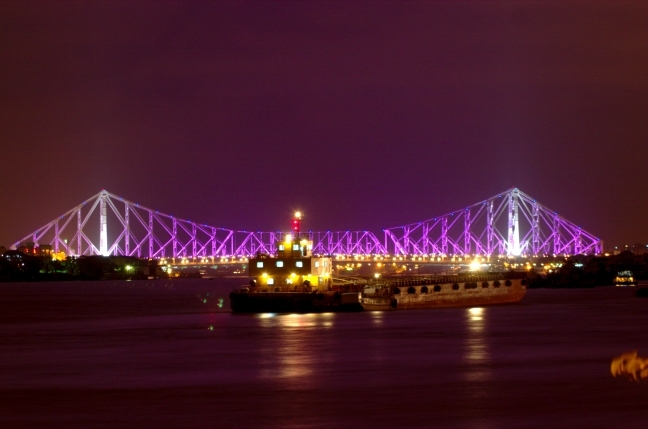 Another powerful reminder of the British architectural work in Kolkata, the Howrah bridge stretches across the breadth of the Hooghly river (name for the Ganges in Kolkata) – a yawning giant of steel that connects the twin cities Howrah and Kolkata(Calcutta at that time).

But Kolkata has a habit of taking everything from colonial architecture, to international spiritual movements, and endowing them with a touch that is distinctly its own. In the warmth and confidence that Kolkata exudes while bringing everything under a single cultural umbrella, in the dignity with which Kolkata has borne the transformation from being the capital of India to a Maoist infested city, in its resilience as it is still trying to shake off its ‘babu’ culture and embrace the strides of development- Kolkata truly makes for a very interesting international destination.

A traveler, traveling to Kolkata would at some of time inevitably have to cross the Howrah bridge, if he plans to explore the city. However, Kolkata is no New York, and you may not expect an encore of your leisurely Brooklyn Bridge photo-session here. By the time you set foot on the 705 meter bridge, you will be so busy maneuvering your way on one of the busiest bridges of the world, you may have little time to pause and wonder. It is a better idea to know beforehand about this architectural phenomenon.

The bridge was built at the time of World War II by the British to allow access to the allied troops to the Burmese front. Many sources claim that the Howrah Bridge was built in the 19th C. They are, in fact, referring to the pontoon bridge built by Sir Bradford Leslie in 1874. The bridge was completed in 1942, after seven long years, and was opened to the public in 1943.

Howrah bridge figures among the most famous bridges of India. It is an architectural marvel of its times. At the time of building, the bridge was the third largest cantilever bridge in the world. Anyone who visits Kolkata makes a trip to the Howrah bridge, curious to see how a bridge ‘without any nuts and bolts’ can span 705 meters, with a height of 82 meters, and bear a daily weight of 150,000 vehicles and 4,000,000 pedestrians.

The Howrah Bridge is a Suspension Type Balanced Cantilever Bridge. It has a central span of 1500 feet. Its suspended span is 564 feet.

Traffic over the Howrah Bridge

Any architectural feat is judged as much on its design as it is on its strength. The Howrah bridge scores high on both counts. As mentioned, the bridge supports a huge flow of traffic- vehicles, pedestrians and even cattle. There are footpaths, each 15-foot-wide, on both sides of the pitch road that remain flocked by pedestrians. Till before 1993, even trams plied on the bridge.

The bridge has CCTV cameras installed as a security measure.

Renaming of the Howrah Bridge

The Howrah Bridge was renamed the Rabindra Setu after Bengali Nobel laureate Rabindranath Tagore. However, in everyday parlance the bridge continues to be referred to as the Howrah Bridge.

More Bridges across the river Hooghly

The Howrah bridge, though an icon of Kolkata is no longer the only bridge that spans across the river Hooghly. A second bridge- a cable-stayed one – was also built across the river Hooghly connecting Kolkata and Howrah. At 823 meters, named the Vidyasagar Setu,this toll bridge is easily the longest cable stayed bridge in India, and ranks among the top eighty in the world. Other bridges that run across the Hooghly river are Vivekananda Setu, Nivedita Setu, Jubilee Bridge, and Iswar Gupta Setu. Setu is the Bengali word for ‘bridge’. These bridges lead to important points in Kolkata like the Dakshineswara temple, the Jagannath Ghat.

Howrah Bridge – An icon of Kolkata

The Howrah Bridge has come to become synonymous with Kolkata. In every movie centerd around this place, a visual of the Howrah bridge is inevitable. A lot many famous Bollywood movies show the Howrah Bridge. In fact, there is also a famous Hindi movie of the same name. The Howrah Bridge finds exalted mention in Rudyard Kipling’s “The City of Dreadful Nights.”
Unfortunately, the Bridge also suffers from the bane of being in one of the most populous and dirtiest cities of India. Not only is the beauty of the bridge marred by stains of betel-leaves and bird droppings, but it has also been considerably corroded.
Try to make a trip to the bridge at night, if by day, you did not have the time to stop and tarry awhile. The illuminated night-time view will surely nudge you awake to the reality of Kolkata- the juxtaposition of the silent shining Hooghly of the night against the clamor of the day, the evening wind that brings the smell of deliverance, against the sweat and grime of the day. An evening at the Howrah Bridge, is a traveler’s tryst with Kolkata- the day that you decide to call a city your own.

A few facts about this architectural marvel:

1. The Howrah Bridge is an eight-lane bridge that sees huge traffic.
2. An unbelievable amount of steel- more than 26,500 metric tonnes was used in building the bridge.
3. Tata Steel was one of the suppliers of steel required to build the bridge.
4. During hot summers, the entire bridge expands by as much as a meter.
5. Any kind of photography, while you are standing on the middle of the bridge is prohibited while you are on the middle of the bridge. However, you can take as many pictures as you can from afar. The view from the riverbank is especially good. But if you are really keen about architecture, a good idea will be to forget about photography and really study this marvel up-close.
6. It is the sixth longest cantilever bridge in the world.

Where is Howrah Bridge Located?

How to Reach Howrah Bridge

The nearest airport is Netaji Subhash Chandra Bose International Airport located in Kolkata. A cab will get you to Howrah Bridge Railway Station via Jessore Road in around 30 minutes.

By Rail:
If you land at Howrah Railway station, take a walk via Bankim Setu and you will be at the Bridge in a matter of 15 minutes. A car will take you there in an even shorter time.

If you wish to arrive at Howrah Bridge from Sealdah Railway Station, it will take you approximately 10 minutes by car via Mahatma Gandhi Road.

Visit Kolkata and all of its attractions during the autumn and winter months from October to March. After March, temperatures start soaring and during July-August heavy downpours and clogging of streets, make trips much less enjoyable.

The Howrah Bridge remains open to public all through the day. However, for a long undisturbed tour of the bridge, try to visit late at night or early in the morning. Kolkata wears a very different charm in the early mornings. A visit to the Howrah Bridge at such a time is a great way to experience it.

The entire length of the bridge is free to visitors.

What are the coordinates of Howrah Bridge?

What are the nearby attractions?