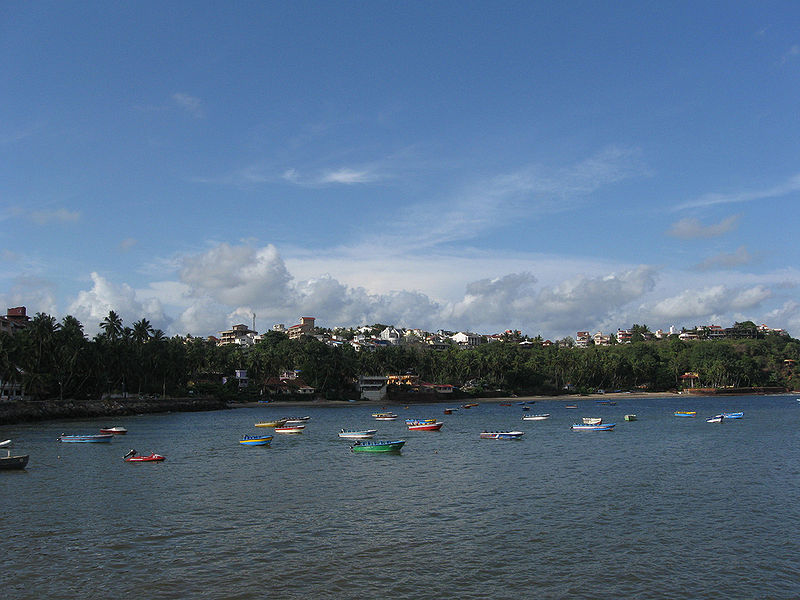 Dona Paula offers its visitors a variety of water sports

The history and romance surrounding Dona Paula, a small village in the suburbs of Panjim, Goa, has entranced locals and travelers since ages. It is a secluded bay with a fascinating view of the Mormugao harbor and this has made it one of the most popular tourist destinations of Goa.

Its dream location has also made it a coveted spot for water tourism. Between the months of October and May, passengers can travel across the bay daily, thanks to the Dona Paula-Mormugao Harbour Ferry. But if you are more of the adventurous kind, you can also opt for a variety of water sports like wind surfing, yachting, water scootering, para sailing, boating, swimming and fishing.

Nestled in the scenic location where two rivers meet the Arabian Sea, the Dona Paula Beach is an ideal spot to sunbathe or simply gaze at the deep blue ocean. Hawkers sell trinkets on the shores attesting to the fate of local legend, Dona Paula, which make for some interesting souvenirs.

A host of cafes like Martin’s Beach Corner, Sea Pebble, Menino’s and Sea View dot the rocky beach. Travelers can also choose to stay in a variety of supremely luxurious beach resorts like O Pescador, Dona Sylvia and the Sandalwood Goa.

The Love-Story of Dona Paula

This quaint village and its sea beach are wrought with mystery and the fate of unrequited love. The village is named after Paula Amaral Antonio de Souto Maior, a historic figure in Portuguese India. She was the daughter of the Portuguese Viceroy of Jaffnapatnam, in Sri Lanka. She and her family arrived in Goa in 1644, where she allegedly fell in love with a local fisherman, Gasper Dias. After her father, the Viceroy, separated them, she jumped from a cliff top into the sea.

Due to this tragic love story, this village is also called the Lovers’ Paradise. Even now, locals believe that on moonlit nights, Dona Paula emerges from the ocean wearing nothing but a string of pearls, the very one she was wearing when she jumped to her end. It is said, after her death, the locals renamed the village after her, as a mark of respect for her.

Her tombstone, now found on the wall of the Chapel at the Governor’s Palace at Raj Bhavan (previously called Cabo Raj Niwas), bears an inscription in Portuguese by her husband, begging of those who might read it to pray for the ‘salvation’ of her soul. The building is currently the official residence of the Governor of Goa and is situated on the westernmost tip of Dona Paula.

Its 500-year old Chapel offers the most magnificent bird’s eye view of Dona Paula. It also draws thousands of Goans for festivities and prayers every 15 August to celebrate the Feast of the Chapel.

Ruins of a Military Cemetery Building

A walk along the ruins of a small military cemetery building leads to the Chapel. The cemetery had been built by the British during their brief occupation of Cabo, to deter the French from invading Goa. A forlorn little corner for the dead, it has gravestones which are over a century old.

The cemetery is neatly hidden from view by the Institute of Oceanography. As you head off the main roundabout from Dona Paula to Miramar, you will come across the Institute’s peculiar roof, shaped like a clam. A hand-painted signboard beckoning travelers to the cemetery, lies right beside.

Explore : The Best Beaches in Goa

1. Dona Paula is famous for its architecture. Travelers have to walk into a small islet, linked by a bridge and quay to the mainland, in order to see the Dona Paula monument. This islet is also popular for housing the “Belvedere”, a Greco-Roman heritage structure from where beautiful views of the Arabian Sea and River Zuari rejuvenate the tired eyes.

2. The Cabo Raj Bhavan has a rich history of ascension and architecture. In AD 1540, a plan was proposed to build a fortress here to guard the Zuari and Mandovi rivers. Never used for defence earlier, the fortress was later occupied by British to deter a French invasion. Later it was converted to the Governor’s Palace.

3. In 1969, Baroness Yrse Von Leistner added a sculpture called the Image of India near the ferry jetty of the village. This sculpture was a tribute to her friends, Robert Knox and his wife and depicted the figures of Mother India looking to the east and that of Young India, looking towards the west. The highest platform near this sculpture opens out to spectacular views of the Arabian Sea, across the Mormugao Port.

5. Dona Paula is the most expensive residential location in the state. The famous La Marvel Colony is located right next to the Raj Bhavan. Some of the top policy makers and industrialists of Goa live here.

Where is Dona Paula?

Located to the south of the hammer-shaped, rocky headland that separates the Mandovi and Zuari estuaries, Dona Paula is an idyllic tourist destination. The 7-kilometer distance between Dona Paula and Panjim, Miramar, is filled with a splendid sea-stretch that makes it a beautiful spot to walk on. Located right where the Zuari and Mandovi rivers flow into the Arabian Sea, the Dona Paula Viewpoint provides a breathtaking scenery of the blue ocean.

Dona Paula experiences a tropical monsoon climate with most months of the year being hot and humid. May is usually the hottest month with temperatures sometimes reaching 35°C with high humidity. Monsoons last between June and September.

The best time to visit is the winter season, which lasts from December to February with the lowest temperature reaching 21°C. In addition, devout Christians from all over the country visit the Chapel to celebrate the Feast of the Chapel on 15 August.

What are the coordinates of Dona Paula ?

What are some attractions near Dona Paula ?