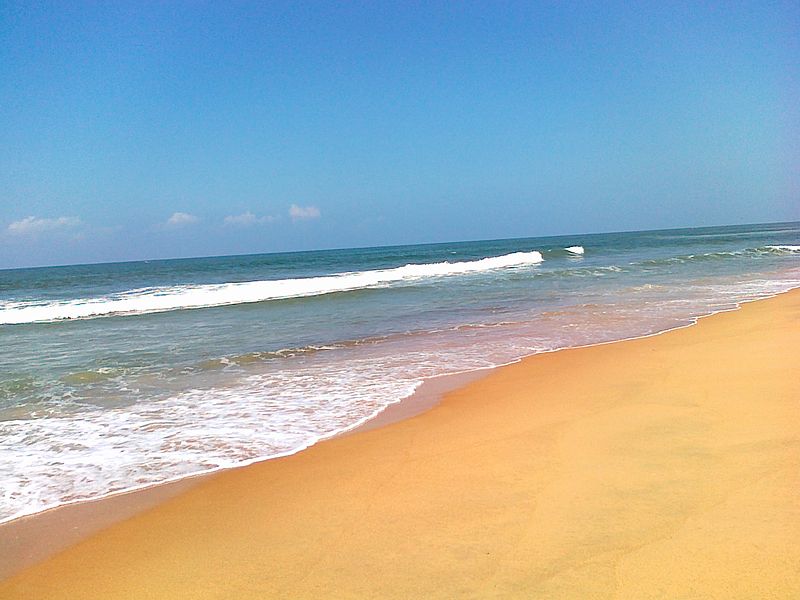 A view of Candolim Beach in Goa

Candolim Beach is the second largest beach in Goa. A continuation of the Calangute beach, it stretches lazily with its beautiful scrub-covered dunes. These dunes attract a lot of tourists every year, and there is an endless number of things to do, once you arrive at the beach- water sports, parasailing, windsurfing, water-skiing and lots more. For those who are not fond of adventure sports, there is always fishing. Tourists can also enjoy sea excursions where they are taken far into the sea from where perfect sunset shots can be captured.

Renowned for its quiet, Candolim is one of the most serene beaches of the state. Its environment helps sustain schools of fish and makes it a treasure spot for fishing. Compared to other beaches like Calangute, Candolim has fewer visitors on its shores, which makes it a gem for lovers of pristine nature. Nightlife on the beach too, is less raucous.

As Candolim’s long, narrow beach joins the smaller Sinquerim Beach on its south, a series of beach shacks offering sun beds with shade come into view. This area is also filled with a string of Candolim Beach Huts with decent facilities that are also easy on the pocket.

Even though, Candolim has its fair share of beach-related excitement, the most recent buzz was not around its many water sports, but around the presence of a 240-meter long-ore carrier called the River Princess that ran aground off the Candolim-Sinquerim coast on June 2000. For over 11 years, the Government did not remove the carrier as it continued to softly rust away, but it did lead to widespread curiosity on River Princess.

Tourists have also been known to swim out to sea in order to take photos with the Princess. After more than a decade of campaigning by locals, the laborious process of removing the rusting ship has begun. The visual taint caused by the industrial relic is now almost gone and the beach is back to its pristine beauty.

The greatest attraction of Candolim Beach is Fort Aguada. Built in 1612 by the Portuguese in order to prevent invasion by the Dutch colonizers and Maratha rulers, this majestic piece of architecture stands tall even today, as it looks over the mouth of the Mandovi River. Due to the abundance of spring water from the hillside, the Fort became a pit-stop for ships arriving from Portugal. This is how the Fort got its name (‘Agua’ means ‘water’). The steps of the Fort’s main courtyard lead down to vast underground water tanks, which had the ability to hold about 10 million liters of drinking water.

The Aguada Fort also hosts the old Portuguese Lighthouse, built in 1864. This once housed Church of St. Augustine’s Great Bell before it was transported to the Church of Our Lady of the Immaculate Conception in Panaji. This lighthouse is the oldest of its kind in Asia, and visitors can occasionally climb up its spiral staircase to enjoy the breathtaking view from the top.

A little below the Fort is Goa’s largest prison, Fort Aguada Jail, which was built on the site that once hosted the citadel. The road to the Jail consists of a weirdly wonderful path through tycoon Jimmy Gazdar’s beautiful compound. Goan architect, Gerard De Cunha designed this reclusive palace that is carefully guarded by a froth of fountains, foliage and follies.

As you walk a little east of Fort Aguada, your eyes are treated to a magnificent Church of St. Lawrence. Established in 1643, the Church was meant to honor the patron saint of sailors, St. Lawrence. Visitors return time and again to check out the image of the patron saint standing on the gilded reredos, holding one model ship.

A little inwards into the village, the spirit of Goan culture is brought to life by Candolim’s National Tourism Award winning project, ‘Calizz’, which in Konkani, means ‘Heart’. A 45-minute tour conducted by local historians takes travelers through the state’s rich cultural history with illuminating insights that fill the compound with transplanted traditional Goan houses in their authentic interiors. This is one tour, for which you will not need a map.

You may also like to read about the  The Best Beaches in Goa.

Where is Candolim Beach?

Candolim, a village is located in Bardez Taluka of North Goa. It is situated just south of the popular Calangute beach. It is 15km away from Panjim and is easily reachable by buses from both Panjim and Mapusa. Its nearest railway station is Thivim. Dabolim is the nearest international airport and it takes about an hour to cover the odd 38km from Dabolim to Candolim. Distance from the Candolim Beach to the Baga Beach is approximately 5.4km and it takes around 20 minutes to cover that distance. The distances of Candolim to Anjuna, Calangute and Chapora beaches respectively, are 10.2km (28 minutes), 3.1km (9 minutes) and 15.4km(39 minutes).

The general climate is hot and humid, although the monsoons start from June onwards making it difficult to engage in water sports during this time. October to December and February is the best time to visit the Candolim Beach.

What are the coordinates of  Candolim Beach?

What are some of the attractions near Candolim Beach ?