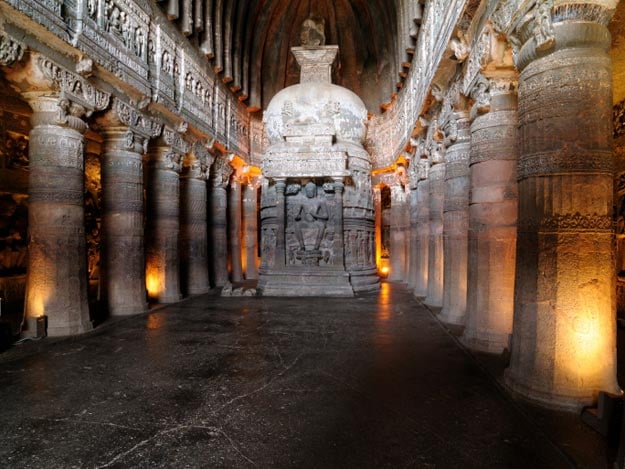 The Beautiful Caves of Ajanta at Aurangabad, Maharashtra

The Ajanta Caves in Aurangabad district of Maharashtra were once used as a Buddhist monastery, with hundreds of teachers and students. The caves were constructed in two phases, the first beginning around the 2nd century BC. The second phase began in the 5th century AD, and saw some modernization of the existing caves as well as the creation of temples and many of the paintings and carvings, as decoration became more popular.

After this, the caves were abandoned and mostly forgotten. John Smith, a British Army Officer in the Madras Regiment, discovered the caves in 1819 when he was on a tiger hunt. Tourists visit these 30 remaining caves to view the religious art and wall murals inside the caves. The caves comprise of living areas, stupas, carvings and paintings. Out of these 30 caves, the cave numbers 9, 10, 19, 26, and 29 are chaitya-grihas and the remaining are monasteries. Many of the paintings in the Ajanta caves date back to the period second century BC to 6th centuryAD. All paintings are strongly inspired by the life of Lord Buddha. The paintings are made on a ground of mud-plaster in the mural painting technique. The base of the paintings was built with a rough layer of iron oxide mixed sand, paddy husk, vegetable fibres, grass and other fibrous material of organic origin.

The second coat was of fine mud mixed with ferruginous earth or sand. Finally, a thin coat of lime was applied upon this surface. Bold lines were made drawn over the painting area and then spaces were filled with the respective colors. Different shades of terra verte, kaolin, lamp black, red and yellow ochre, lime, gypsum, and lapis lazuli were applied. In the pre-Christian era, Lord Buddha was represented symbolically in the form of a stupa. Thus some of the earlier caves were found to have stupas. However, in the later periods the images of Buddha were inscribed upon various items including coins. Thus, the caves of the second phase exhibit statues and paintings of Lord Buddha.

Where is Ajanta Caves?

The Ajanta caves are located on the rocky cliff off a gorge along the Waghora River, just 55 km from Jalgaon city, Maharashtra. The nearest large city is located about 100 kilometers from the cave, and is called Aurangabad. Presently, the nearest airport to the caves is the Aurangabad airport. However, Jalgaon has also developed its own airport which will be functional soon. Currently, you can reach Jalgaon via train.

Winter, from November through February, is the best time to visit the Ajanta caves, with comfortable weather that never gets extreme. The monsoon season lasts from June to October and can be very wet, making it a bad choice for a visit.

The caves open from 9:00 am to 5:30 pm on Tuesdays to Sundays. The caves are also open on all national holidays.

Nearby attraction: Ellora Caves and Aurangabad.