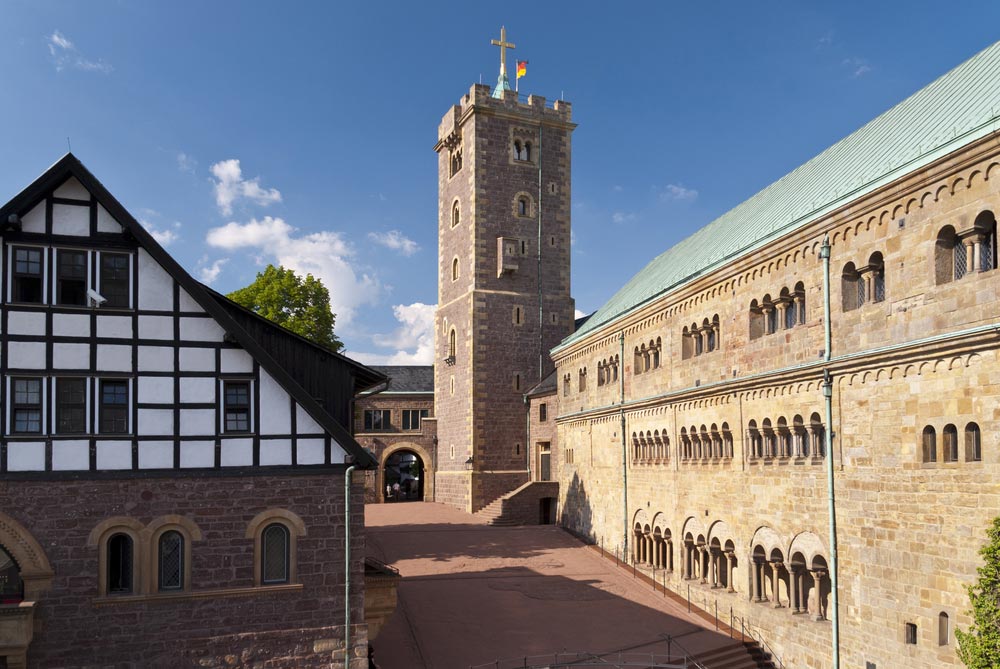 Fortress atop a Hill – Wartburg Castle in Eisenach, Germany

Wartburg Castle is a historic work of medieval architecture in Eisenach, Germany. The fortress atop a hill is today seen as a symbol of Germany’s feudal period. Construction of the castle as the royal residence of the Ludovicians began in 1067, the work of Count Ludwig der Springer (the Jumper). The family prospered for about 200 years, until the death of King Heinrich Raspe IV, the last Ludovician king. After the end of the Ludovician dynasty, the castle fell to the Margrave of Wettin, Heinrich von Meissen. This marked the beginning of the end of Wartburg Castle, as the seat of power soon moved elsewhere.

Wartburg Castle is most famous for the role it played in the life of Martin Luther. Excommunicated by Pope Leo X in May 1521, Luther went to Wartburg to hide out throughout his exile. Luther lived in the castle until March 1522, and during his time in the castle, he translated the New Testament into German, which soon became the most popular translation. For this, Wartburg is a pilgrimage destination for Christians from around the world.

In 1817, the first Wartburg Festival took place with German fraternities celebrating the nation’s victory over Napoleon. It was also the site of book burnings and other events during the 1848 Revolution, and the movement for unification.

Architect Hugo von Ritgen helped reconstruct Wartburg Castle in the 19th century under plans by the Grand Duke of Saxony. The restoration brought back the 16th century designs, including the Luther Room. The castle escaped damage from bombings during World War II, but the Soviets did pillage. The German Democratic Republic (GDR) made the site a national monument.

What remains of the castle includes the gates and drawbridge, courtyards and a well, the South Tower (constructed in 1318), the belfry, and apartments. Some of the structures at the site lie in ruins, including some of the outworks. The Knights House, once a house for servants and guards, dates back to the 15th century.

The Palas, or Great Hall, is the oldest building at Wartburg Castle. Parts of the hall were constructed between 1157 and 1170, and it includes a chapel and the Hall of the Minstrels and the Festival Hall. The halls are decorated with frescoes of minstrels and Christian themes, painted by Moritz von Schwind. The Luther Room is located in the Bailiff’s lodge. The museum houses many artifacts from throughout the castle’s history.

Where is Wartburg Castle ?

Wartburg Castle is located in Eisenach, a town in the German state of Thuringia. Thuringia is located in southeastern Germany, is well connected to major German cities. The city of Eisenach enjoys frequent train service, which includes Deutsche Bahn and regional rail lines. The train service will transport visitors who fly into the nearby major airline hub, Frankfurt International.

The castle itself is perched on a mountain in the forest overlooking the town of Eisenach. The majority of the town can be experienced on foot, though the hike up to the castle does involve some rigorous activity. While many consider the climb rewarding, others opt to catch a shuttle to make the trek up to the top. A thorough bus system is another option to get around town more quickly.

The castle has short hours during the colder months, which lasts from November through March. During this period, the castle closes by 3:30 pm. Longer hours and better weather can be experienced from April through October, when the castle remains open until 5 pm. Good weather also brings an opportunity for children to take a donkey ride up the hill to the castle. English tours of the castle are generally offered in the early afternoon, at 1:30 pm. Costs for entry and tours is about 9 euro per adult visitor, and 5 euro per student.