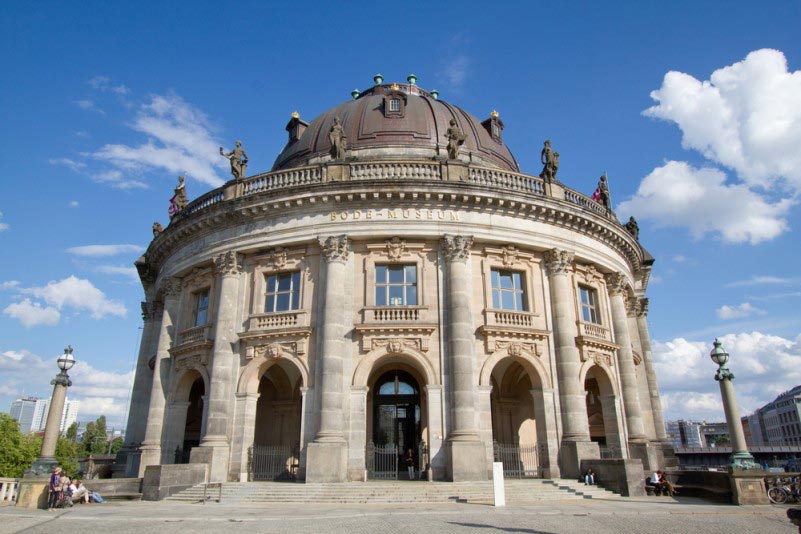 The Bode Museum in Museum Island at Berlin, Germany

Museum Island, an island within the Spree River of Berlin, Germany, is home to 5 museums. Known as Museuminsel in German, the island was once the city of Cölln, and is now the historic center of Berlin.

Altes Museum, meaning Old Museum, was built from 1824 to 1828 and is the oldest museum on the island. Altes Museum houses Greek and Roman art, and the top floor holds exhibitions. Neues Museum, meaning New Museum, was built from 1843 to 1847, but was destroyed in WWII, rebuilt and reopened in 2009. Neues Museum houses archaeological artifacts, and Egyptian and Etruscan sculptures – notably a bust of Queen Nefertiti.

Alte Nationalgalerie, meaning Old National Gallery, was built beginning in 1866 and houses art from the 19th century. Construction on the Bode Museum began in 1897. It opened in 1904, and had been called Kaiser-Friedrich Museum. Bode Museum exhibits sculptures and late Antique and Byzantine art, with paintings dating up to 1800. The Pergamon Museum is a museum of ancient architecture. It was constructed from 1909 to 1930 and includes reconstructions of the Pergamon Altar (Greek altar) and the Ishtar Gate ofBabylon. The museums have varying designs, each one’s architecture is designed to reflect the works it houses.

The concept of the Museum Island is based on plans from the German architect, Karl Friedrich Schinkel, and established during the Age of Enlightenment. The 5 major museums are part of Berlin State Museums, and include:

Where is Museum Island ?

Museum is located in Berlin, Germany’s Mitte district, in the city center. The island is in the Spree River, and the museums occupy the northern half of the island.

Museum Island has easy access from around Berlin– the transportation hub, Hauptbahnhof is located nearby. The station is served by many of the S-Bahn and U-Bahn lines.

May and June are good months to visit for the good weather (less rain, more sunshine) and there are also often festivals going on during the weekends. September and October also have good weather for visiting Berlin.