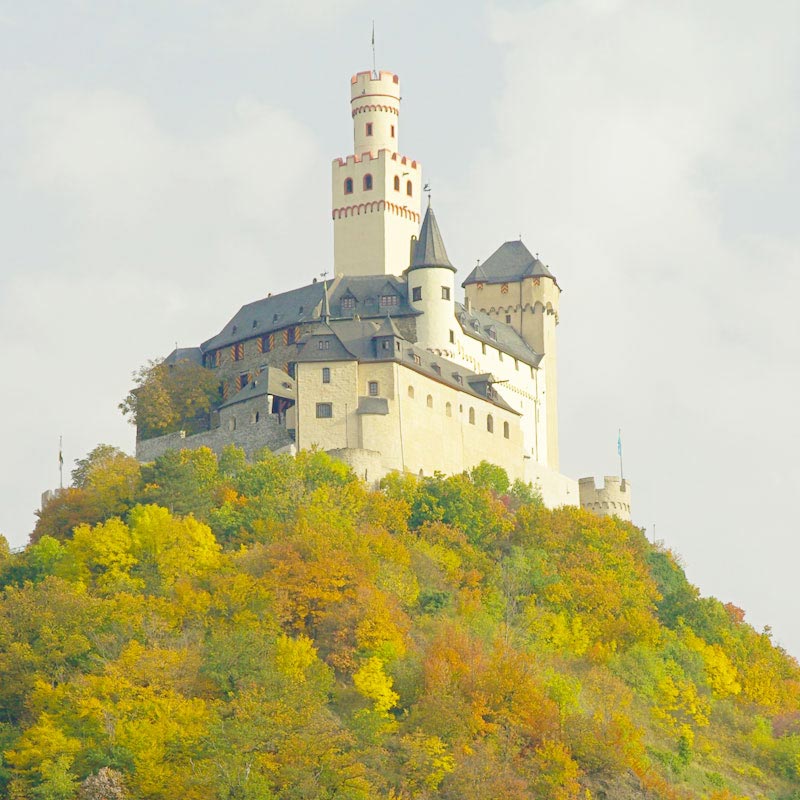 The Marksburg Castle in Germany still stands in all its past glory. It is unspoilt by the ravages of time and has become an important address for the German Castle Association. You will find the Marksburg Castle stands with its head held high above the town of Braubach, which is incidentally the original name of the castle. The castle survived damage during World War II, when there was heavy shelling from the western bank of the River Rhine during the close of the Second World War. You will be fascinated by the commanding view of the eastern bank of the River, when you will go on a tour to this one of the well-known castles of Germany.

The Marksburg Castle was the fortified residence of some of the most notable figures of Germany who are very important in the history of the country. It has three asymmetrical wings, which are located encircling a triangular courtyard. The southern side of the castle is protected by the Kaiser Heinrich Tower as many enemy attacks were expected from this side. The magnificent living quarters along with women’s apartments, a kitchen, and the Knights’ Hall located on the upper floor will be found on the eastern wing of the building.

The castle is regarded as an excellent example of a medieval fortress and is one of the frequented tourist attractions in Germany. The castle is an irreplaceable Germany’s cultural monument which has withstood the test of time. It is better to be in good health to visit this castle as it is somewhat difficult to climb up the steep slopes of the castle. However, many tourists do so as they cannot let go the chance of seeing such an important monument.

The only drawback of visiting this castle is that most of the tours are in German. Before planning, check with the Visitor Information Center when they provide guided tours in English.

Where is Marksburg Castle ?

The Marksburg Castle sits above the Braubach town majestically. The castle is around 100 km away from the Frankfurt-Hahn Airport. It may take less than a one-and-a-half hour to reach the castle from the airport.

The best time to visit the Marksburg Castle in Germany is during May or September, when the weather is pleasant.