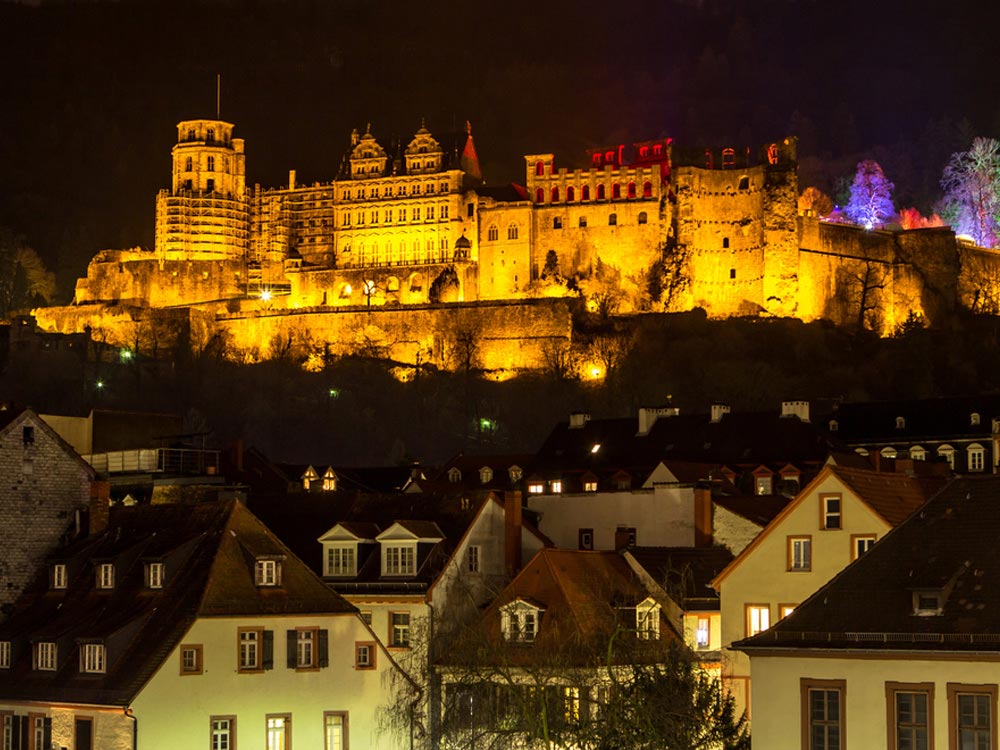 Illuminated Heidelberg Castle over the Old Town of Heidelberg

The Heidelberg Castle in Germany is one of the foremost tourist attractions in Germany frequented by visitors from all across the world. It is believed that the first building of the Heidelberg Castle was built by Prince Elector Ruprecht III way back in the 15th century. This particular stone building has a very unassuming look. A lot of additions were made over a period of years. However, the castle was not well-maintained and that led to its ruined condition. The ruins of the Heidelberg Castle also had a mesmerizing effect on the minds of visitors. Poets and romantics found something very enamoring about the ruins of the castle. Even though a royal building was constructed opposite to the Ruprecht building by Prince Elector Philipp, the real credit for converting the fortress to a castle goes to Prince Electors of the 16th and 17th century. The palaces built by Ottheinrich and Friedrich IV occupy a very important position in German architectural history. They are indeed very impressive and so is the “English Building” built by Friedrich V.

After lightning struck the Heidelberg Castle in 1764, it was damaged. The stones of the castle started being used by the commoners for construction of their own houses. Towards the beginning of the 19th century, Count Charles de Graimberg tried to preserve the castle. Much later in the year 1934, the King’s Hall was added to it. Currently, the hall is used for hosting theatrical performances as well as banquets.

Heidelberg Castle Festival is celebrated each year in the summer months. Visitors are sure to have a fantastic time if they can make it to this place at this time of the year. The concerts, musicals, operas and theatrical performances put up by in the courtyard of the Heidelberg Castle are thoroughly enjoyed by all. Yet, another big attraction is the biggest wine barrel in the world. Built in the year 1751 for the cellar of the castle, it is nine yards long and eight yards wide.

The “Great Grotto” with its beautifully decorated walls and the pond with the sandstone sculpture of “father Rhine” in the castle gardens will surely impress any onlooker.

Where is Heidelberg Castle ?

The Heidelberg Castle is a prominent landmark located to the north of the Alps in Heidelberg, Germany. You can reach the castle within a 20-minute drive by car from the Mannheim City Airport.

The best time to visit the Heidelberg Castle in Germany is during summer (between May and September).

The entry ticket for an adult costs € 7.00 while a discounted ticket costs € 4.00. The ticket entitles you to enter mountain railway, castle, Large Barrel, and German Pharmacy Museum.