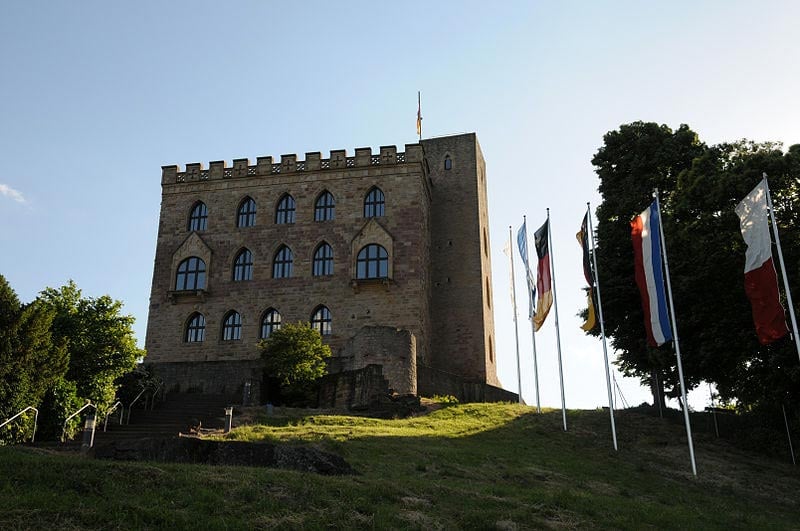 Hambach Castle is a symbol of German Democracy

Hambach Castle in Germany has made a special place for itself in the history of Germany. It is considered to be the cradle of German democracy and is also one of the foremost tourist attractions in Germany. This castle in Neustadt, a charming historical town in Germany, has a quaint quality that never fails to impress visitors.

Hambach Castle was named so because of the sweet chestnut forest that skirts it. Even though there are no strong documented proofs in support of the fact, but it is believed that the Hambach Castle was built as an imperial castle. It is also said that Emperor Henry IV’s Walk to Canossa began from the castle in the year 1076. What is stated with certainty is that in between the period 1090 and 1104, Bishop Johann I of Speyer gave it to Bishopric of Speyer who remained its owner till the very end of the 18th century. Towards the end of the 18th century, the Hambach Castle was owned by the French government. Later, with the ruin of Congress of Vienna, it was “gifted” by the people of Neustadt to the Bavarian king Maximilian. That is why it is also locally popular as the Maxburg Castle.

The Hambach Castle came to the limelight in the year 1832. Around 20,000 to 30,000 people voiced their protests against the oppressive measures taken by the Bavarian government which was resulting in mass discontent. They also expressed their desire for a unified Germany, because at that point of time Germany was under the threat of breaking up into numerous small states. This eventful happening is better known as Hambacher Fest. Currently, the Hambach Castle, Germany is a venue for conferences and exhibitions and also houses a museum.

Where is Hambach Castle ?

Hambach Castle is located on the Mountain Schlossberg to the east of the Palatine Forest, in the proximity of the urban district Hambach of Neustadt an der Weinstraße, Germany. It can be reached within 40 minutes from the Mannheim City Airport.

The best time to visit Hambach castle in Germany is during summer (from June through August).