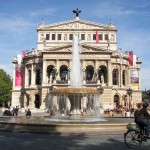 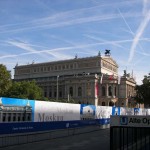 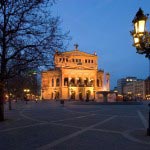 Alte Oper, or Old Opera, that served initially as an opera house is today a concert venue, home to the Frankfurt Radio Symphony Orchestra. Designed by Richard Lucae in the Renaissance style, the opera house is known for its impressive architecture. It took seven years to complete the construction of the opera house, which opened in 1880.

Also known as the Frankfurt Opernhaus, the 34-meter-high opera house had the capacity to seat 2000+ people. The building of Alte Oper housed a grand staircase, known as the “Imperial Staircase”. Kaiser Wilhelm I of Germany was among the guests who attended the inauguration ceremony. Impressed Kaiser Wilhelm uttered: “Das könnte ich mir in Berlin nicht erlauben” which translates to ‘I couldn’t permit myself this sort of thing in Berlin’. Carl Orff’s Carmina Burana is one of the famous works premiered at the opera house.

During World War II, a bomb was dropped on the city in 1944, destroying the Alte Oper. Several measures were taken to prevent the building from collapsing altogether. Years later, there were plans for new construction on the site, but the people of Frankfurt fought to have the Alte Oper reconstructed. The City Council took almost 24 years to give approval for the reconstruction.

The Alte Oper, using parts of its original façade, was rebuilt and opened its doors on August 28, 1981. Because a new Opera house had already been built in Frankfurt, the old one was named Alte Oper.

Though Frankfurt has a new opera house, the Alte Oper still operates as a venue for concerts, performances, and plays. The Alte Oper features The Großer Saal (Large Hall) with a seating capacity of 2500 seats, The Mozart-Saal with 700 seats, and smaller halls for conventions.

Café Rosso and a bar / vestibule

Give yourself a break from your routine at Cafe Rosso and a bar. Take a short break for a snack or a light meal or even homemade cakes and fresh cake.

Munch on the sumptuous meals while enjoying the panoramic views of the Opera Square and the Frankfurt skyline.

It serves refreshing drinks, sweets, light meals, and sweet treats just before the concert and during the break.

Sip your favorite drinks at the Da Capo.

Albert Mangelsdorff Foyer also serves snacks and drinks. So, if you are at Level 5, you need not to worry about visiting any other level to satiate your hunger bites.

Where is Alte Oper ?

Alte Oper is situated on Opernplatz (meaning Opera Square) in the center of Frankfurt. The opera house and the square are located in Innenstad, which is the central district of Frankfurt am Main. The opera house is located at a distance of around 22 km from the Frankfurt airport. Taxis are easily available at the airport. Alte Oper can also be reached by train.

Spring and autumn are the best times to visit to enjoy milder weather in Frankfurt, as summers can get very hot and humid, and winter is cold and rainy.