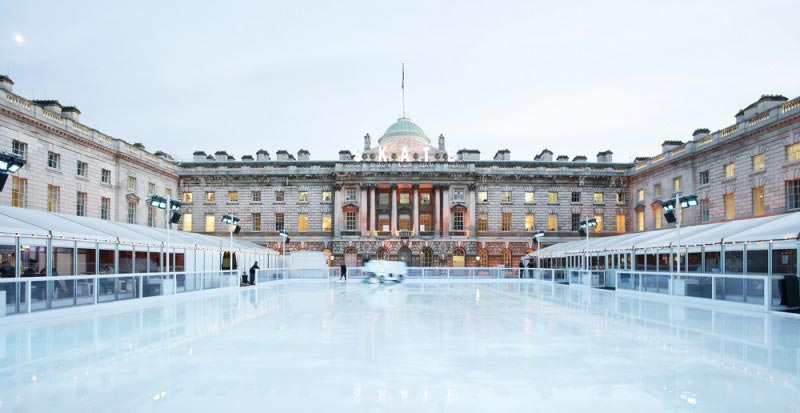 Somerset House is a neo-classical building and was the residence of the Dukes of Somerset. William Chambers built it way back in the year 1770. The building has been designed in such a manner as to resemble a cluster of four mansions along with a courtyard.

In the past, this neo-classical edifice housed important government offices, which included the head office of the British Navy and the Royal Society, the Royal Academy of Arts, and the Society of Antiquaries, to name just a few.

However, this magnificent edifice was thoroughly renovated and it now houses a gallery alongside two museums. The Courtyard Gallery in particular is one of London’s finest collections of artwork. The Gilbert Collection, which is a museum of decorative art is also worth a visit.

The courtyard of Somerset House, which used to be a place for parking has been overhauled and, in its place, designer cascading fountains have been installed. In the winter, the courtyard is converted into an open-air ice-skating rink. The courtyard at Somerset House is a magnificent locale, especially after dusk as lights come on and the entire area seems like a bejeweled fairyland.

Apart from ice-skating, a new extreme winter sport too has been introduced – the Ice Wall, wherein one can climb up a wall of pure ice with the help of crampons, ice picks and ropes. Other attractions of Somerset House are the Seaman’s Waiting Hall and also the Nelson Stair.

Where is Somerset House?

Somerset House is situated in the heart of London. It overlooks the Thames in the southern part of the Strand. Both the mainline railway and the London Underground connect to the place. The nearest stations for both are Charing Cross, Waterloo and Blackfriars; and Temple, Covent Garden, Charing Cross and Embankment respectively.

Somerset House is open daily from 10 in the morning to 6 in the evening. Winter is a good bet to visit the place due to its many winter attractions. It is also a delight to watch the place in the evening time when it is illuminated.