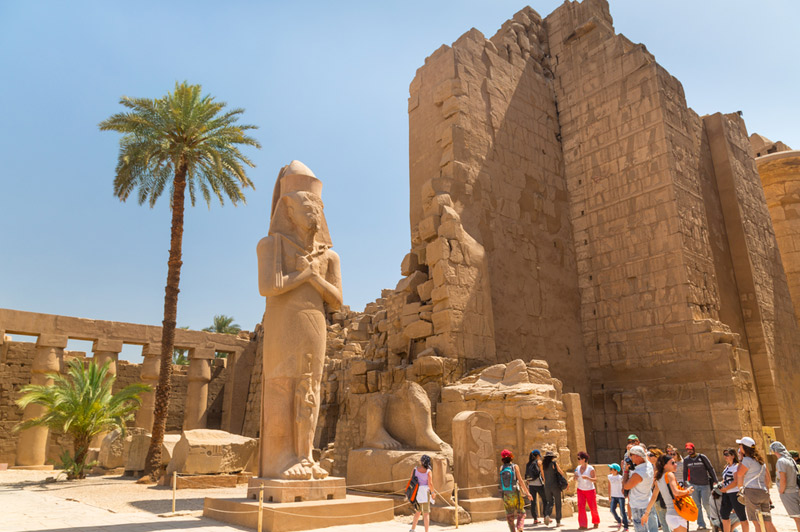 Tap into the alacrity of Luxor with dazzling displays of history-filled monuments.

Tap into the alacrity of Luxor with its numerous temples, tombs, sanctuaries, and pylons of the Ancient Egypt. Embellished with dazzling displays of history-filled treasures on the East and the West banks – each symbolizing Life and Death respectively – of the Nile River, it is aptly known as the greatest “open-air museum” in the world. This regal city is a prehistoric amalgamation of the Middle Kingdom and the New Kingdom of the Ancient Egypt with their exceptional charm.

Places to Visit in Luxor

Valley of the Kings – Located on the hills immediately behind the west bank of Nile, this Theban necropolis features the most famed collection of underground mausoleums. This historical site was the final resting place for many pharaohs (including “the boy king” Tutankhamun) of the New Kingdom period. The wives of pharaohs were buried in the Valley of the Queens. This archeological goldmine encompasses 63 tombs of kings from the 18th, 19th, and 20th dynasties. The largest of all tombs is KV5 – the tomb of Ramesses II – which has over 120 chambers. The chambers of the royal tombs are decorated with illustrated texts and wall paintings depicting scenes from Egyptian mythology.

Karnak Temple Complex – Mighty columns and colossal sculptures along with spectacular mix of kiosks, pylons, and obelisks, make it one of the largest ancient religious sites in the world. The Great Hypostyle Hall, covering an area of 5,000 sq. meter, has 134 massive columns (each with diameter of three meters) in 16 rows. Visitors are often awestruck by its grandeur as 12 of these columns are 21 meters tall and the remaining 122 reach nearly 10 meters. Moreover, a 29-m-tall obelisk, weighing 328 tons, stands in the Precinct of Amun Re. Built over a period of 1300 years, this impressive temple has long been the fascination of Hollywood movies.

Luxor Temple – Founded during the New Kingdom (around 1400 BC), this temple is called ‘ipet resyt’ (southern sanctuary) in Egyptian language. Unlike most temples of Thebes, it is not devoted to a Theban god. Instead, it is dedicated to the rejuvenation of kingship. Pylon of Ramses II, Court of Rameses II, and a red granite obelisk are the highlights of this temple. In ancient times, a joyous procession during the annual Opet Festival used to march on the avenue of sphinxes from the Amun Temple in Karnak to the Luxor Temple. Late evening or around sunset is the ideal time to get here.

Luxor Museum – It documents history of Thebes from the Old Kingdom right up to the Islamic Period. Masterpieces of Pharaonic art, a collection of 26 well-preserved statues found in Luxor Temple, and two royal mummies of pharaohs (Ahmose I and Ramses I) are the prized possessions of this museum. Opened in 1975, it sits on the corniche overlooking the bank of Nile in downtown.

Colossi of Memnon – Two gigantic hand-carved statues made of yellowish-brown sandstone and seated on a cube-shaped throne are known as the Colossi of Memnon. With a towering height of 18 meters, these two figures are placed about 15 meters apart. For the past 3400 years, they have been guarding the temple of King Amenhotep III, of which only scanty traces remain.

Ramesseum – Often overshadowed by Deir el-Bahari and left unseen altogether by most visitors, it was built as a mortuary temple by Ramesses II. Even its remnants are a stunning sight to behold and arouse curiosity about how impressive the place must have looked back in its heyday. Its layout, which is quite orthodox, has two courts, hypostyle halls, chambers, and storerooms.

Medinet Habu, Tombs of the Nobles, Mortuary Temple of Seti I, Deir el-Medina, and Mummification Museum are other not-to-be-missed tourist attractions in Luxor.

Things to Do in Luxor

Banana Island – After spending a dusty day visiting tombs and temples, board a felucca (traditional wooden sail boat) in late afternoon to this tiny palm-shaded island. Enjoy magnificent sunset views and discover enchanting natural beauty along the majestic Nile River. Boat cruises from Luxor to Aswan is the best way to explore the best kept secrets of the Nile River Valley.

Hot Air Balloon Rides – There’s no better way to explore the ancient wonders of Luxor away from the crowd than taking a hot air balloon ride against the backdrop of the rising sun. Incredible views of surrounding patchwork of green fields and peaceful glow of dawn make this trip worthwhile. When you finally land, take a Calèche (horse-drawn carriage) ride in the city to escape the heat.

Shopping – The main souk in Sharia el-Birka is a fun place to browse for usual finds or even a T-shirt with your name printed in hieroglyphs. From eye-catching fabrics and spice-scented stalls to exotic glassware and alabaster carvings – you’ll find it all.

Day Trips – Take day trips to Abydos, Edfu, Esna, and Aswan in southern Egypt to get a taste of Nubian culture. Don’t forget to stop by Dendera Temple complex, Temple of Kom Ombo, and the legendary Abu Simbel temples.

It is located on the banks of the Nile River about 410 miles (660 km) south of Cairo, the capital of Egypt, in the Nile Valley.

The city witnesses clear, bright, and sunny weather throughout the year. The winter months, between November and March, are ideal for visiting Upper Egypt.

By Air – Luxor International Airport (LXR), four miles east of city center, is served by intercontinental airlines to and from Saudi Arabia, the UAE, and some European countries.

By Train – The Luxor Railway Station, operated by Egyptian National Railways, has daily passenger trains to Cairo, Aswan, and Alexandria.

By Road – Rental agencies for cars and bikes are available in the city. However, minibuses, also preferred by the locals, are the most economical mode of transport to get around.