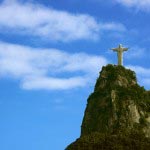 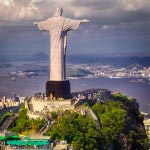 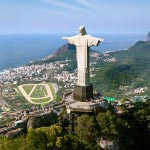 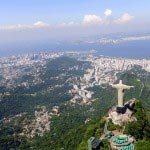 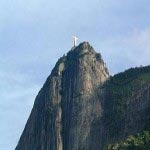 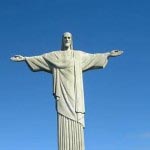 A larger-than-life statue of Jesus Christ perched on the Corcovado Mountain in Rio de Janeiro is inspiring, to say the least. The largest Art Deco statue of Jesus with his arms outstretched gives viewers an impression that the savior of men is keeping a watchful eye over the people of Rio. This 38-m high symbol of peace offers spectacular views of downtown Rio, the bay, Sugarloaf Mountain, Copacabana beach, and Ipanema beach.

The idea of placing a Christian monument on Mount Corcovado (which means Hunchback) first surfaced in the middle of the 1850s to honor Princess Isabel, the daughter of Emperor Pedro II. The very idea of building the statue was shunned in 1889 when Brazil became a republic and the church and state were separated. But the Catholic Circle of Rio de Janeiro recommended building the monument in 1920. Donations from general public were collected to fund the construction of the site. It took nine years to build Christ the Redeemer (1922 to 1931) tourist attraction, which was thrown open to public on October 12, 1931.

Things to do In and Around the Christ the Redeemer Statue

Besides hiking, one can enjoy Hang Gliding over the wonderful city of Rio. The Tijuca National Forest is the place where you can get bookings done for Hang Gliding.

Enjoy the cog train ride through the Tijuca Rainforest to reach the vantage point in the Corcovado Mountain and enjoy breathtaking views of the statue.

Corcovado Mountain – It’s a granite mountain peak in central Rio with the statue of Christ the Redeemer on top. The mountain is situated within the national park called the Tijuca Forest. A 20-minute ride by Corcovado Rack Railway will get you to the top of the mountain.

Guanabara Bay – This oceanic bay in the Southeastern part of Brazil offers a spectacular sight when viewed from a high altitude as it has around 130 small islands that look like dots in the bay.

Copacabana Beach – It’s an outstanding confluence of land and sea. Indulge in activities on this long curving beach and watch the football skills being displayed by favela (slum) kids. The beach is sufficiently illuminated at night.

Ipanema Beach – The beach, with a long stretch of sand, displays diverse subcultures. It’s a favorite hangout for artists and intellectuals alike.

Where is Christ the Redeemer Statue?

How to Reach Christ the Redeemer?

By Air – The Santos Dumont Airport is just 12 km away from the statue and a half-an-hour drive is all what it takes to get there. The Galeao-Antonio Carlos Jobim International Airport in Rio de Janeiro is just over 26 km away from the Corcovado Mountain. A drive will take close to an hour. The Jacarepagua-Roberto Marinho Airport is another option. It’s less than 30 km from here. A little longer than an hour’s drive gets you there.

By Train – Specially customized train routes are in place to help travelers reach the destination. The Corcovado train station in Cosme Velho and the Riotur kiosque near the Copacabana beach are the hubs from where the trains leave for this heritage destination.

By Road – Mount Carcovado is well connected to every part of the city by road. There are specific bus routes operational to take the tourists to this historic site.

Best Time to Visit in Christ the Redeemer

Though the weather in Rio de Janeiro remains pleasant throughout the year, September to November are the most preferred months.

During high season (including Saturdays, Sundays and holidays), the ticket price for adults is R$ 62. During low season, the price is slashed to R$ 51. Minors up to five years don’t need tickets.

Get the tickets from the counter at the Corcovado train station in Cosme Velho or the Riotur kiosk on the Copacabana beach.