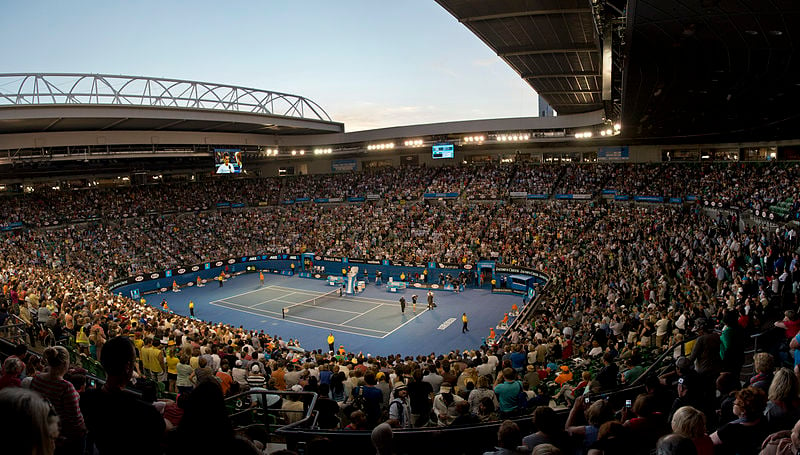 The venue for the youngest Grand Slam- Australian Opens, Rod Laver Arena was built in 1988 (doubt) with a budget of 94 million dollars. It is located in Melbourne, Australia.

The colossal Rod Laver Arena as we see today was completed in two stages. The first stage was completed in 1987. The highlight of the design was a 700 tonne retractable roof. The roof that takes all of 20 minutes to cover up the arena, has proven to be a blessing during inclement weathers, especially ever since the Arena has gained popularity as the venue of choice for concerts and other outdoor events.

The Rod Lavern Arena had a 14820 seat center court, two match courts with a total seating capacity of 9000, 13 outside match courts, 5 indoor practice courts, public concourse. In a later project that took place just before the 1996 Australian Open, and cost 23 million dollars, two new show courts which together sat 3800 spectators, a function center with a seating of 1800, eight extra match courts, parking for 500 cars and Garden Square.

Since Rod Laver Arena hosts a number of popular concerts and events, finding a spot to park can be a major issue. Parking during events may be pre- booked online at least 24 hours prior to the event at a discount of 33%. You can pre-book a spot for $20 during an event, which without pre-booking will cost $30. On a day there is no event, parking charges are $7.5 per vehicle. Ticketek operates a hotline 92861208 for accessible parking. The accessible parking can be accessed via Entrance Con Olympic Boulevard.

There are parking spaces around the Rod Laver Arena, besides the official parking area of the stadium. Cars may be parked at the Yarra Park, City Car Parks, Wilson Parking, Federation Square, and on-street at metered parking spots around the Botanical Gardens and the Yarra River.

Australian Open fans would like nothing better than to play a round of tennis with their favorite stars Stanislas Wawrinka, Noval Djokovic, or Roger Federer. However, in the absence of such a possibility, the next best option is to visit the places the sport-stars frequent during the Australian Open and try to get a feel of what the place would look like on the day of a sporting event.

Guided tours that take a visitor to the backstage areas of Rod Laver Arena are available. Guests are taken through the Tournament Control, the changing rooms for players, the Corporate Superbox, the Walk of Champions, Davis Cup Room, and inside the Media Theatrette where post match press conferences are held.

Where is Rod Laver Arena

How to reach Rod Laver Arena

The nearest international airport is Melbourne. You can take a cab via Collins St and Batman Ave to reach the Rod Laver Arena within roughly 6 minutes.

From Melbourne Central Railway Station, a cab will take you to Rod Laver Arena via Batman Avenue and Exhibition Street in 8 minutes.

Rod Laver Arena may be visited during matches, and concerts. Inclement weather does not pose too big a problem once you have reached there, as the Arena has a retractable roof.

Hours to visit will depend upon the event you wish to attend.

Tickets can be booked online in advance. Ticket prices vary depending on the event.

What are the coordinates of Rod Laver Arena?