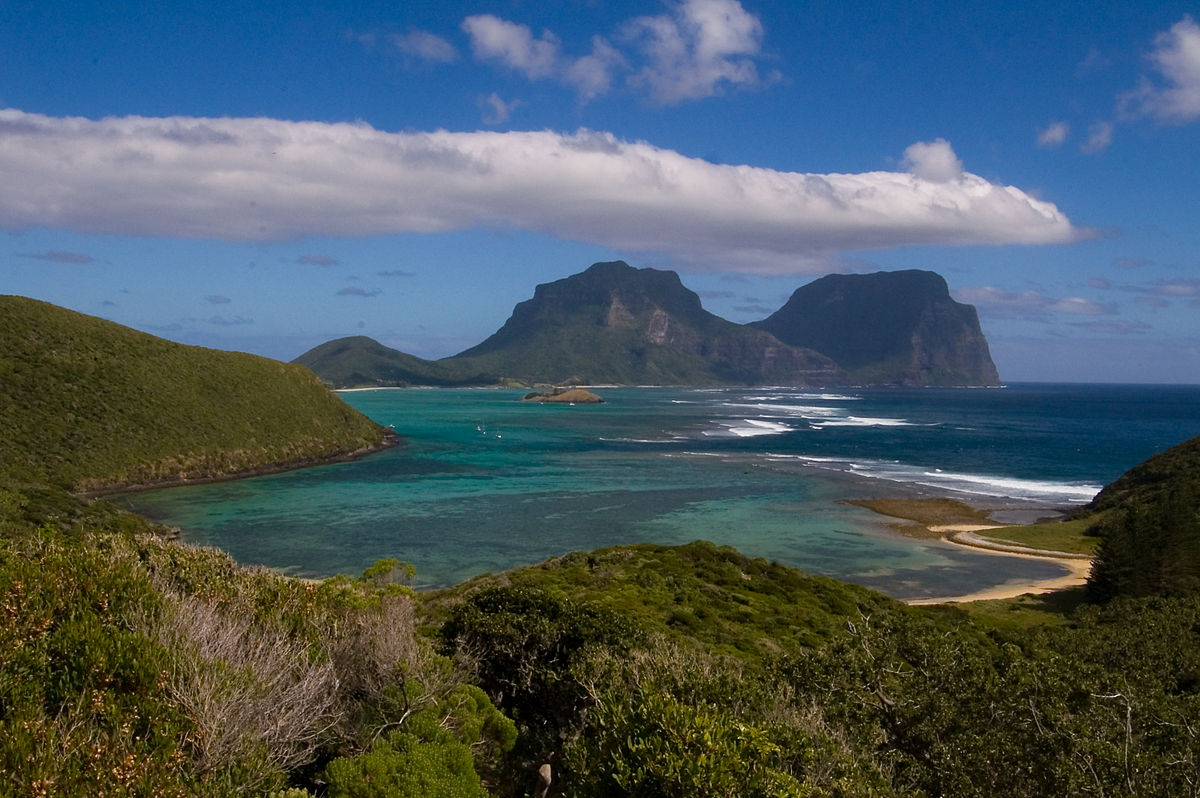 Lord Howe Island from the North

Lord Howe Island is a prime example of how volcanic activity can lead to picturesque oceanic islands with a precious ecological system. It has a unique biota, and boasts of the world’s most southerly coral reef. The spectacular scenic locale is hidden from the mainland, thus making it Australia’s best-kept secret.

The island is a haven for the conservation of endangered species like the Lord Howe woodhen and the Lord Howe Island Phasmid, both of which are endemic to this region. About 75% of the island’s natural vegetation remains undisturbed, thus making it a true ‘Nature’s Paradise’.

Only 400 visitors are allowed at a time on the island, which makes it one of the quietest scenic locales in Australia. Adventurists can indulge in a variety of sea sports like surfing, kayaking, diving, kite surfing, stand-up paddleboarding, snorkeling, windsurfing and swimming.

Things to do at Lord Howe Island

Fishing: Fishing is one of the most important activities on the island. Blinky Beach is famous for schools of Australian salmon while Neds Beach Sanctuary Zone offers the chance to hand-feed fish like the meter-long kingfish, spangled emperor, silver drummer, garfish, wrasse and mullet.

Hiking at Mount Gower and Valley of Shadows: Hiking enthusiasts can find solace in the world-renowned and physically challenging one-day trip to Mount Gower (2870 feet). One may take a leisurely stroll across the green enclave of the Valley of Shadows. Massive banyans with huge ‘limbs’ stretch across a hectare of land, and 131-foot high Kentia palm forests cast long shadows, making this one of the most surreal bushwalks ever.

Bird Watching: The island is also a premier bird watching destination. 130 species of birds populate the island, including hundreds of shearwaters, Providence petrels, and the rare Lord Howe Island woodhen.

Malabar Hill: Another fantastic spot for hiking and bird watching is the Malabar Hill.

The Hill hosts the world’s largest red-tailed tropic bird nesting site. These birds display ingenuous airborne courting techniques one will be lucky to observe. September to May is nesting season; nature lovers flock to this secluded island during this time. The walk down Malabar Hill captures breathtaking views of the Admiralty Islands on the north and the twin peaks, Mount Gower and Mount Lidgbird on the south.

Transit Hill: An easy stroll, of a little more than a mile, to Transit Hill rewards the bird watcher with ravishing views of the golden whistler and the emerald ground dove.

North Bay: The secluded North Bay is only accessible on foot or by boat. The return journey on foot takes around 4 hours. The Bay is a veritable paradise of migratory sea birds and colorful corals, stingrays, turtles and fish. Mount Eliza, Herring and the Old Gulch Pools are some of the best sightseeing destinations at the Bay. Snorkelers visit this Bay for the Wreck of the ‘Favourite’, which has been on the ocean floor for 50 years.

Marine Park: Another must-visit on Lord Howe Island is the Marine Park. With the only fringe coral reef lagoon in New South Wales and the world’s southernmost coral reef, this Park is important not just for tourists, but also scientists. The clear waters of the Park show a unique camaraderie of tropical and temperate species resulting out of the intersection of cool and warm currents.

Lord Howe has a number of intimate lodges and hotels coupled with spa-retreats and seafood restaurants. However, none of this is cheap, although prices fall considerably in the winter.

Where is Lord Howe Island?

Lord Howe is a crescent-shaped volcanic paradise that lies in the middle of the Tasman Sea, 373 miles off the coast of New South Wales. Located in the southwest Pacific Ocean, it is 437 miles away from Sydney, 373 miles east of Port Macquarie and 480 miles from the northeastern Norfolk Island.

The Lord Howe Island Airport is serviced by daily QantasLink flights from Sydney, and weekend flights from Brisbane and Port Macquarie. During peak season, weekly flights are also available from Coffs Harbour. It usually takes 3 minutes to reach the town from the airport.

There is no public transport system within the Island. Accommodation places generally drive tourists to the sights. Without a car, though, returning after dark can be difficult. Travelers can hire bicycles for $8 per day or cars for $50 per day. The speed limit in the island is 15 miles/hour.

Characterized by a subtropical climate, Lord Howe Island experiences a mild or warm summer with erratic rainfall and a cool winter with uniform rainfall. The windiest month, July, is subject to strong gales. July and August are the coldest, although temperatures never fall below 55 °F. November to February are the driest months, and often, the best time to visit.