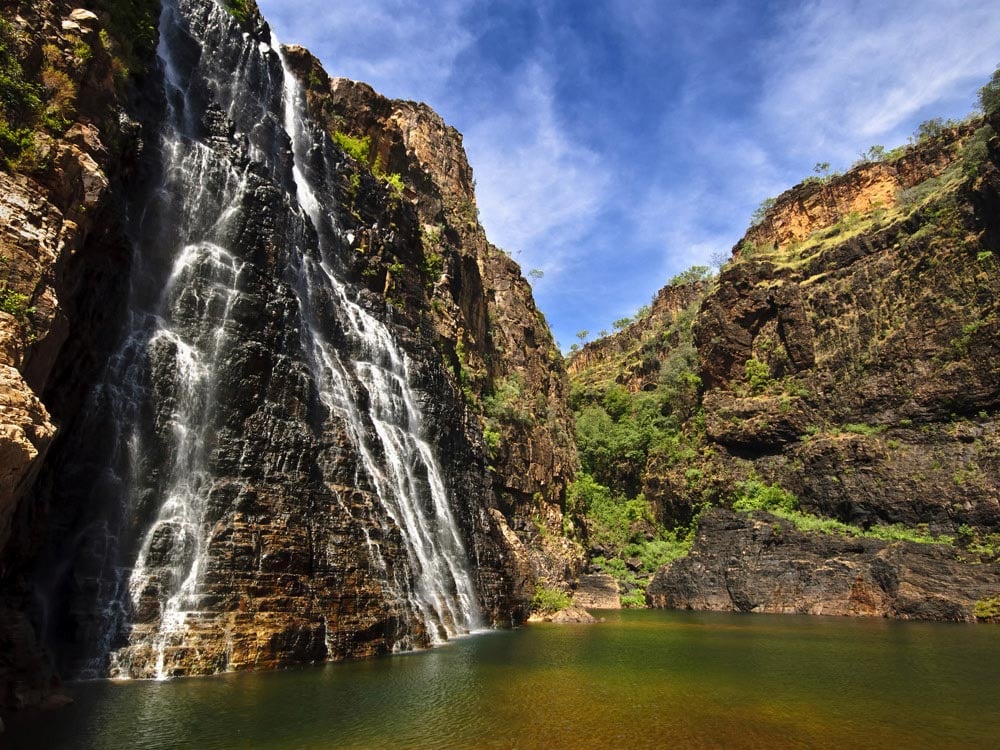 Kakadu National Park in Australia is a major tourist attraction that draws tourists with its wide variety of flora and fauna along with its towering escarpment containing aboriginal rock art. This place of natural beauty has a lot to offer:

One of the highlights of the Kakadu National Park is definitely its fauna; here you can see animals like crocodiles, wallabies, dingos, goannas and countless species of birds. Some of the birds at the park are, endangered species such as the Red Goshawk, Hooded Parrot, Partridge Pigeon and Rainbow Pitta.

Some of the best places to view the birds and animals are Anbangbang Billabong, Bardedjilidji Walk, Illigadjarr Walk, Yurmikmik Walks.

Look the amazing rock art created by ancestors, especially the Rainbow Serpent who is believed to have painted her image on the rock surface as she passed over the Ubirr Rock. Nourlangie Rock at the Anbangbang Gallery is another attraction of the park.

Waterfalls can be seen in the Jim Jim and Twin Falls region, and the Mary River region. Some of the waterfalls worth seeing are Gunlom Falls and Maguk, which flows even in the dry season.

Camping tours and safari tours to the park are extremely popular with the tourists. There are many campgrounds in the park. Accommodation options are also ample; there are many inns and hotels that are located near the park.

The park is also a site for numerous activities that include rock climbing, trekking, and other adventure sports. One of the favorite activities in the park is bushwalking and you can also opt for fishing in places like Sandy Billabong, and Jim Jim Billabong and waters west of the Kakadu Highway. Boating is another popular activity in the park; however, it can be dangerous because of the presence of the crocodiles in the waters. The park offers Guluyambi and Yellow water cruises.

There are certain things without which you should never visit the park like life jackets, water, a torch and a tool kit.

The ideal time to visit the Kakadu National Park is during the summers. It is advisable to avoid tours of the park in between May and September, as the park is flooded during this period.

The park opens round the clock throughout the year. However, there are some areas in the park that open on specific timings:

Passes are required to enter the park. The passes are valid for 14 consecutive days. The pass for an adult costs $25. The entry of a Northern Territory resident and child (under 16 years) is free.