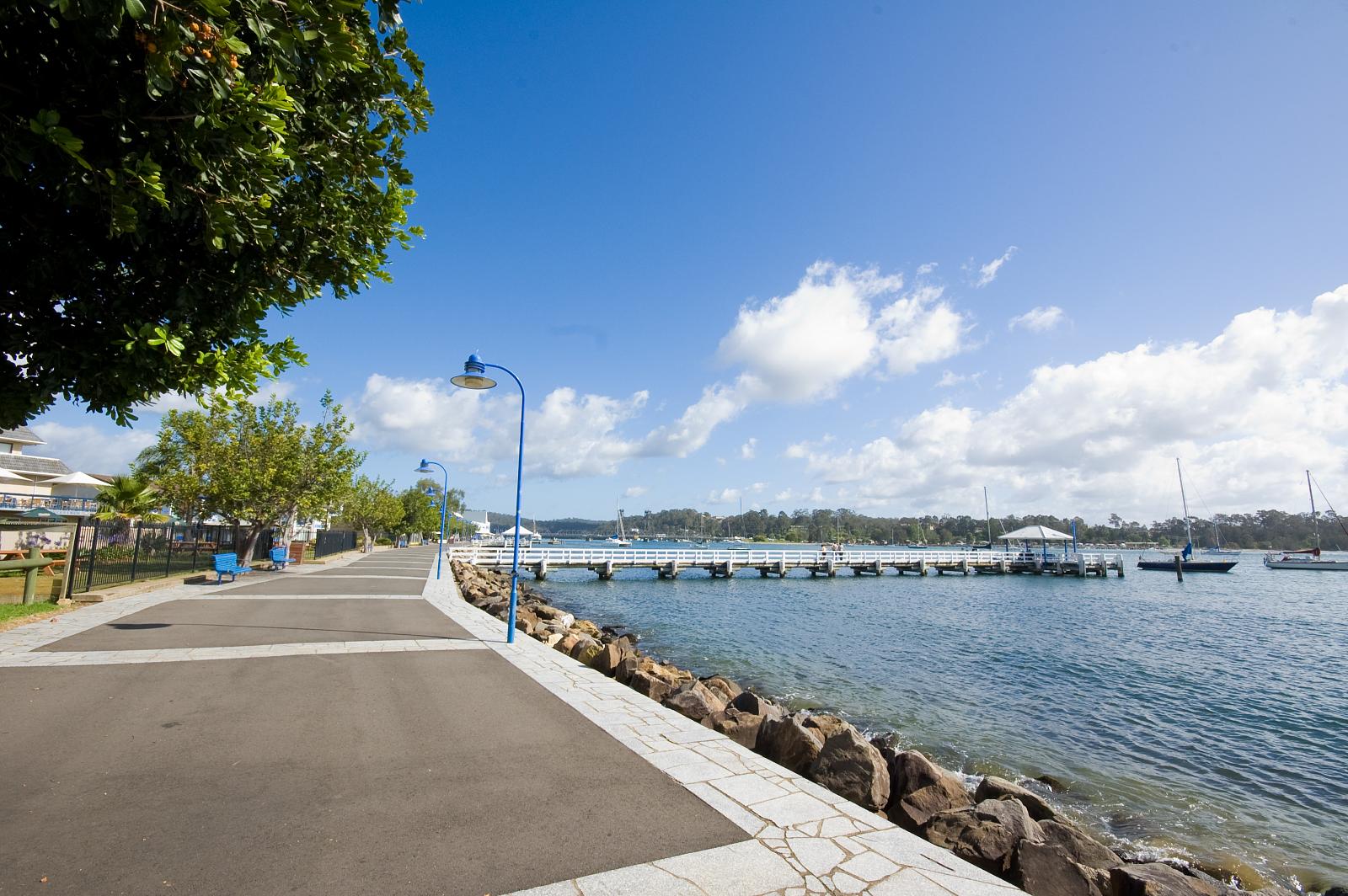 New South Wales is famous for its pristine coastline, waterways, and wildlife. Batemans Bay is one of the gems in this part of south-east Australia. It is renowned for its beaches, the Clyde river estuary, oyster farms, snorkeling , and fishing activities. In fact, the size of game fish caught locally has received international recognition. Owing to its accessibility from the main cities of Sydney, Canberra, and Melbourne, Batemans Bay has become a preferred getaway for both domestic and international tourists.

Activities and Attractions at Batemans Bay

Batemans Bay features a long coastline, the Clyde river valley, and adjoining forests. These are rich in diverse species of plants and animals, many of which are endangered and endemic. It is no wonder that the government has made laws to protect their habitat.

Batemans Bay Snorkeling Trail: The numerous snorkeling spots are a key attraction in Batesmans Bay, owing to the shallow waters, spongy and rocky reefs, seaweed beds, and various species of marine creatures living in them. These include abalones, stingrays, lobsters, and endemic fish species like red morwong and luderick.

The Batemans Marine Park, which stretches from Murramarang Beach to Wallaga Lake and another three nautical miles beyond the shores, has a number of spots that are famous for snorkeling. One doesn’t need to be a pro to dive into the waters here. Then again, Batemans Bay caters to the likings of both novice and experienced divers. While, Sunshine Cove Beach and Maloneys Beach are family favorites, a beginner can head to the Tomakin Cove to begin their underwater adventure. Its reef scenery features eagle rays, stingrays, mullets, and baitfish. The Pink Rocks area in Broulee Island is another snorkeling haven. Apart from these, experienced divers can head to Potato Point for an exhilarating time under the sea. Guerilla Bay is another beloved snorkeling place for both beginners and the experienced.

Wildlife Parks: Batemans Bay is a renowned destination for nature lovers. It has a number of national parks like the Murramarang National Park and the Clyde River National Park, which provide a safe home for various animals like the eastern grey kangaroo, emu, swamp wallaby, birds and marine creatures. A walk through the park can be an enriching experience.

Murramarang National Park: This 11,977-hectare large park comprises beaches, mountains, rocky cliffs, and four islands – Grasshopper, O’Hara, Wasp and Dawsons. It is renowned for its bird-colonies and their unique habitats. There are about 90 species of birds found in the park, which include penguins, shearwaters, white-faced storm petrels, falcons, oystercatchers, and sea eagles. Burrawang, Depot Beach Rainforest, Acheron Ledge, Honeysuckle Beach, Myrtle Beach, Pretty Beach walking tracks are nature trails designed to give some of the best experiences in the park. North Head and Snapper Point are excellent vantage points to enjoy the landscape and watch whales swim during the migration season.

Montague Island Reserve: A protected sanctuary, this reserve within the Batemans Bay Marine Park attracts more than 40,000 sea birds. Apart from the native Australian Little Penguins, the site is a nesting ground for silver gulls, mutton birds, crested terns and other migratory birds. In addition to birds, the shore has a major population of fur seals, and the surrounding waters have grey nurse sharks. Montague Island Reserve is also significant for the local Aboriginal communities. It also offers a great view of the whales between September and November.

Clyde River National Park: Clyde River, one of the least polluted rivers in eastern Australia meets the ocean at Batemans Bay. The result is an unspoilt scenery with breathtaking panoramic views of forested hills, mangroves, salt marshes, and the river front. Several lookout spots, like the one at Holmes, help discover the panorama in its full beauty. The river shores are great sites for picnics and fishing, and the estuary opens the horizon for canoeing through the streams. Set camp at the Beach or Red Gum campgrounds and let the vacation begin.

Birdland Animal Park: A family favorite, this Batemans Bay park is a great place to get up and close with the native animals, birds and reptiles in the area.

In addition to these attractions, Batemans Bay has many other must visit places, like the Treasures from the Deep Museum that has a remarkable collection of shells and corals, Batemans Bay Mini Golf that is renowned for its mini golf courses, Catalina Country Club that has a 27-hole golf course, and the privately owned Mogo Zoo with over 42 rare animal species. Batemans Bay is also known for its oysters. Oyster Shed, and Pearly Oyster Bar and Farm are famous for giving the tourist the most incredible oyster tasting experience. Innes Boatshed is famous for its fried fish and chips.

There is a place to stay for every budget. Choose from a range of hotels, motels, bed and breakfasts, cottages, resorts, cabins, and camps. In Batemans Bay, caravan parks offer a wonderful accommodation option close to nature and yet with all the amenities within reach. BIG4 Batemans Bay at Easts Riverside Holiday Park is one such caravan park, which is highly recommended by those who have stayed there. Accommodations range from camps at $39 to luxurious spa cabins at $320. Other well-known caravan parks are the family owned Caseys Beach Holiday Park, Corrigans Cove Resort in Batehaven, and Pleasurelea Tourist Resort and Caravan Park. The Peak Apartment, Araleun Motor Lodge, Lilli Pilli Bed and Breakfast Unit, and Zorba Motel are good choices for those looking for accommodations other than caravan parks in Batemans Bay.

Where is Batemans Bay?

The Batemans Bay town is located near the intersection of the Princess Highway and Kings Highway. It is easily accessible from Melbourne on its south, Canberra on its west and Sydney to its north.

How to reach Batemans Bay

Reach by Air: The domestic airport at Moruya is just 20 minutes drive away from Batemans Bay. There are domestic flights available from the Kingsford Smith Airport in Sydney. Charter flights are available from Canberra and Melbourne.

Reach by Rail: Tourists wishing to enjoy the countryside view while traveling to Batemans Bay can take a train to Bomaderry in Nowra. Buses, coaches, and cabs are readily available from Bomaderry to transport to Batemans Bay.

Reach by Coach: Batemans Bay is well connected by road. A number of passenger transport companies ply coaches regularly from Canberra, Melbourne and nearby towns. Priors Scenic Express and Murrays are two such coach operators.

Owing to its proximity to the Pacific Ocean, Batemans Bay enjoys a seaside climate with cool and sunny winters (43°F to 63°F) and mildly hot summers (57°F to 75°F). It rains mostly during the summer season, and there are thunderstorms from November to March.

The mild Batemans Bay weather year round makes it an ideal destination to visit anytime of the year. Winters, between June and August, is best for bird watching. Spring season, from September to November, is ideal for hiking and trailing across the forested areas, and watching the whales. During the summers (December to February), enjoy swimming at the beach, camping, fishing and snorkeling.