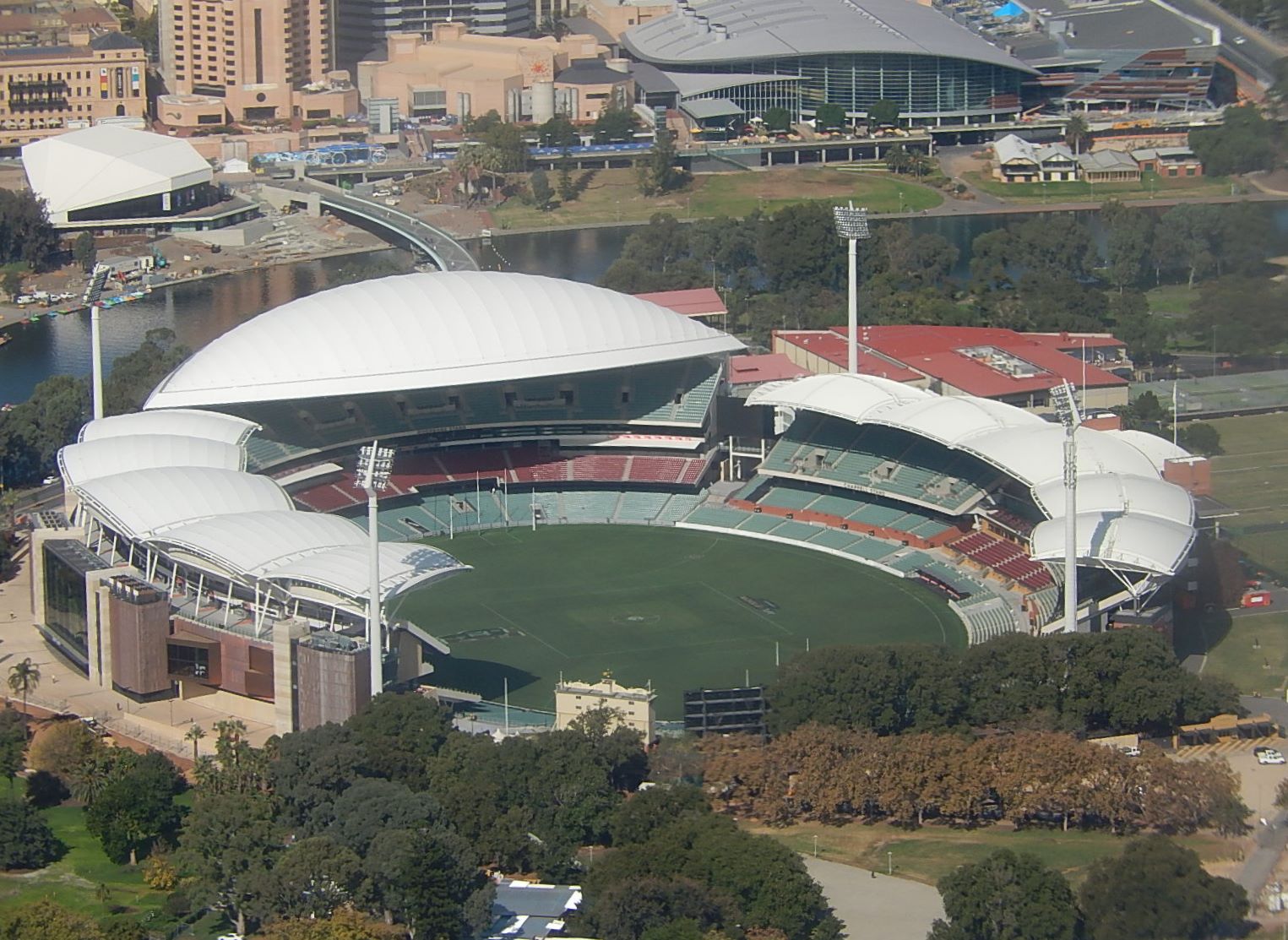 Adelaide Oval, is a stadium in Adelaide, the capital city of South Australia. The stadium hosts several sporting events. Main among them are cricket and football. In the 2015 ICC World Cup too, several matches were played at the Adelaide Stadium, including the first match between 2011 World Cup Winner, India and arch rival Pakistan.

Adelaide Oval has a 145- year- old history. It was set up in 1871 for ‘cricketing purposes’. The first major match played on this historical cricket field had been between All England XI ( captained by WG Grace) and South Australian XXII. The team from England won the match. Thereafter, in bits and parts new grandstands were built, and electric light systems were put in place. Matches played under artificial electric lighting started drawing record crowds. Special seating areas were cordoned off for ladies and smokers. The iconic Adelaide Oval scoreboard that today is a major attraction of the Adelaide Oval Tour, was set up in 1911. People of royal lineage too visited the stadium. Finally, in 1932 Don Bradman scored a historic 299 not out against South Africa.

The stadium has been given a complete makeover recently. The makeover started in 2010 and was complete before March 2014. Adelaide Oval had been one of the most scenic test cricket venues in the world even before the makeover. Now it has been endowed with world- class international facilities to go with its beautiful location and picturesque oval field. On the west there is now a new 14,000- seat grandstand, replacing the earlier member’s stand. The southern grandstand and the eastern grandstand were also newly developed. The southern grandstand has a seating capacity of 14,000 while the eastern one has a total capacity of 19000. The total capacity of the stadium today stands at a little over 53,000. The Northern Mound can accommodate another 6500.

Guided tours of other parts of the stadium depart from the Visitor Centre, Level One Riverbank Stand.
It takes the appreciative visitor through the small details of the newly renovated stadium. The new plan for the stadium blends latest technology with vintage appeal. Hence, you will see the heritage scoreboard, century- old Moreton Bay Fig trees, the northern mound, and many small details that may have otherwise escaped notice.

To apply for a season car parking pass at the Access Car Parking Area, send an e-mail to parking@adelaideoval.com.au.
Taxi stands are located at three places- on the southern side of Pennington Terrace, on the eastern side of Montefiore Road, and to the west of King William Road.
The north, south and east gates have designated bike racks.

Where is Adelaide Oval?

By Road: From Melbourne: The distance of Adelaide Oval stadium from Melbourne is roughly 453 miles- a drive of 8 hours and a half via the National Highway A8.

From Sydney: The distance of Sydney from Adelaide Oval Stadium is 876 miles via Sturt Highway and A20. The drive will take at least fifteen and a half hours.

From Brisbane: Brisbane is at a distance of 1278 miles from the Adelaide Oval Stadium. The drive will take a little less than a full day via A32.

By train: Train services, though available, take up a lot of time and money.

Adelaide is the driest of all Australian capital cities. Its winters are mild and wet, while summers are warm and dry. January and February have really high temperatures in the range of 86º F to 104º F.
March and April are best times to visit, when the weather is sunny but not very hot.

Timings for games vary as per schedule.

Tickets for games vary with every game.
For tours, ticket prices are as follows:

1. Though parking spaces are available at car-parks near the stadium, on the day of a event, these car parks get full quickly. Using public transport is highly advised.
2. On match days taxi stands are located at Pennington Terrace and War Memorial Drive.
3. Small quantities of food is allowed but no eskies are allowed. Eskies are insulated portable containers for food. Basically meaning that you need to have the food sold at the stadium.
4. Bars serving alcohol are available at the venue, but they can be closed down anytime at the discretion of the stadium administration.

What are the attractions around Adelaide Oval Stadium?