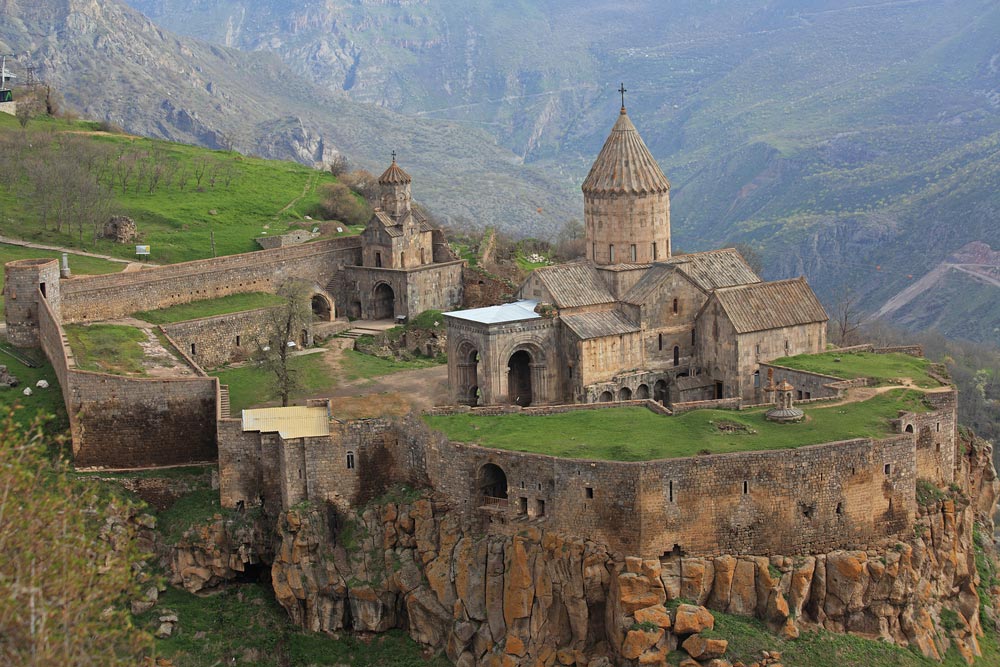 The Tatev Monastery is perched atop a large basalt plateau cut into gorge by the Vorotan River in Armenia. The word “tatev” is generally used to refer to the monastery. To ascend the plateau and reach the monastery, you need to cross the natural land bridge named as the Satan’s Bridge. Before climbing the gorge, visitors love to plunge into the spring-fed pools located around the bridge. The view of the monastery during sunlight is awesome. In case incense is burning in the monastery, watch out for the light falling in through the windows making the sunbeams appear stunning.

Tatev is regarded as the diocese seat of Syunik. In the ancient era, the Armenian priests and scientists observed the sky and the space from this place. Thus, it also served as an astronomical center. This ancient monastery has several parts including kitchen, bakery, stable, etc. The monastery features narrow passages, holes in rooms, windows, and rock stairways. It is said that some of the holes were used to store wine. Most of the rooms in the monastery are empty. The walls and the doors are decorated with carvings of common wildlife in the area, such as snakes, lizards, etc.

The huge fortifications are an evidence of the defensiveness of this monastery. The Monastery of Tatev is built with sturdy stones, placed in such a fashion, so as to make it resistant to the earthquakes. Thus, several parts of the monastery, including the column, survived numerous earthquakes.

Towards the southwest of the mountain, there is a place where the name of the chief pagan Armenian god, Aramazd has been inscribed. According to the legends, just before the dawn of the Christian era, Pagan temples were constructed on this plateau.

On your tour of the monastery, you would see that the valley underneath has Tatev Monastery’s former university overgrown with weeds. There are some picnicking areas nearby.

Some interesting places to visit near the monastery are Mount Aragats, Matenadaran, Etchmiadzin Cathedral, Khor Virap, Geghard, and Zvartnots Cathedral.

Where is Tatev Monastery?

Located in Southern Armenia near the village of ancient Syunik, the Tatev Monastery can be reached within 40 minutes from the Nakhchivan International Airport by car. You must not miss to visit the monastery via Wings of Tatev – the world’s longest aerial tramway. The ropeway takes you to the monastery within 12 minutes.

The months of June through September are the best time to visit the Tatev Monastery in Armenia, as there is very less rainfall during these months.