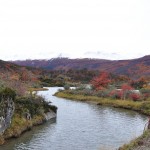 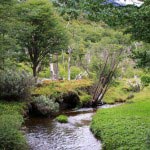 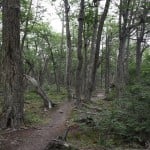 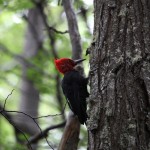 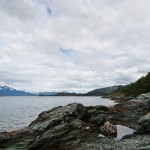 Tierra del Fuego National Park is located on the Argentine island of the same name, which is a part of Patagonia and the Andes. Tierra del Fuego, meaning land of fire, is a triangular island that is part of both Chile and Argentina. The National Park contains coastal forests where visitors can enjoy nature as well as hiking, climbing, fishing, kayaking and other outdoor activities. The natural beauty of this park is characterized by waterfalls, mountains and glaciers, and many species of wildlife.

The National Park houses two kinds of forests characterized by Lenga and Guindo trees. The peaks also have valleys with rivers and lakes of glacial origin.

For the facilities of the visitors, many trekking paths have been built inside the Park. They can be followed to make your tour easy. Here are some of the attractions at the Park:

Black Lagoon: It can be reached by covering only 400 m. area on Route 3. The peat makes its color dark.

Meet the beavers: Climbing around 400 m. up to Los Castores stream, you can see the dams system built by beavers that is adversely affecting the environment. They cut down the trees to make dams, which, rather provoke floods in some parts of the forest.

The Lookout Point: You can directly reach Lapataia Bay by walking on route 3 for panoramic views of the bay.

Animals and Birds: Canadian beaver, black eye-browed albatross, steam duck, chungungo otter, diving petrel, guanaco and red fox are some of the animals and birds that can be spotted in the National Park.

Walk the De la Isla path: If you love to stroll on the beach shores, then this 8,000-metre walk around the Cormoranes archipelago, right along the shores of Lapataia and Ovando would be a great idea.

You can camp beside Lago Roca and a few other free campsites with basic necessities in the Park. The visitors are allowed to make fires in the designated campsites. However, as this is a protected area, they must extinguish the fire carefully before leaving the campsite.

Located on the southern tip of Argentina, Tierra del Fuego is the southernmost national park in the world. The park can also be accessed from Chile, from the park entrance that borders the country, though additional permits may be required.

How to get to Tierra del Fuego National Park?

The park can be accessed by car (or even bicycle) or train. The End of the World Train (El Tren de la Fin del Mundo), which was once a freight line and a prison train, is the southernmost train in the world, and now transports visitors into the national park. Rio Grande Airport is the nearest airport. If you choose to travel by bus, then you need to pay Ar$100 per person, for the round trip.

The rainiest season at Tierra del Fuego is from March to May, and rain and fog are frequent in the temperate climate of the region. Summer temperatures tend to be warmer and may be a better bet, but the park is scenic in the foggy weather as well.

The Park opens throughout the week at 8:00 am.