Facts about Victoria Falls in Zambia 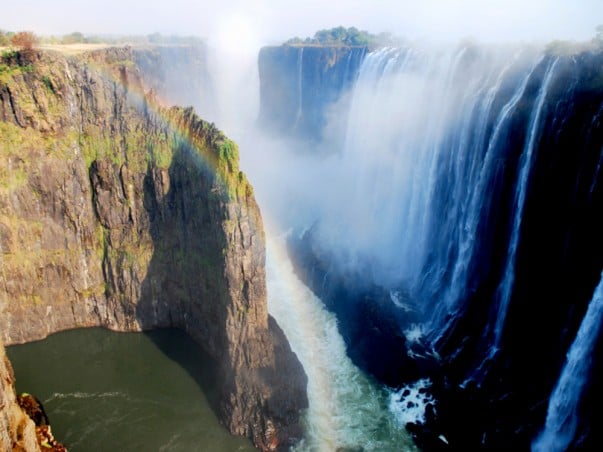 Victoria Falls - one of seven natural wonders of the world

Flanked by the African nations Zimbabwe and Zambia, the Victoria Falls on the Zambezi River, plummet gloriously down from a height of about 110 m. This waterfall is known to the local tribesmen as ‘Mosi-oa-Tunya’, or the ‘Storm that Thunders’ in their native language. It is because when the 1,708 m wide sheet of water falls from that height it creates a thundering sound. Owing to its exceptional height and width, the Victoria Falls is considered to be the largest waterfall in the world. The first European to see the falls was the explorer Dr. David Livingstone in 1855.

The size of the Victoria Falls enhances its beauty and magnificence. As the pristine Zambezi River rolls down the edge it causes heavy water sprays, forming a mist that one can see from 20 km away, and creates a rainbow during the day and a ‘moonbow’ on a full moon night. It is surrounded by luscious rain forests, one of the few in the world that gets ‘rain’, which is actually spraying water from the falls, all round the year. Apart from this, visitors usually spot interesting rock formations, and sights of exotic and endangered birds (like the Taita Falcon and Black Eagle) in the area. It is no wonder that the Victoria Falls is listed among the world’s seven natural wonders.

Located between the Mosi-oa-Tunya World Heritage Site and the Zambezi National Park, the Victoria waterfall lies mid-way to the River Zambezi’s journey. Its massive size is caused by geological forces playing over several billion years changing the waterfall positions over time. The waterfall is interspersed with many small islands and gorges. A notable island here is named Livingstone, which David Livingstone stood on to view the Falls for the first time and confessed, in his journal, that even “angels” gaze upon it while flying by the Victoria Falls. Located at the edge of the waterfall, Livingstone Island is one of the most unique islands in the world. You can access it using hired motor boats and know more about the legend of the place from the guides. An interesting fact is that the Livingstone Island was earlier known as “Goat Island” among the locals.

If you visit the Victoria Falls on a full moon night, you can get one of the most interesting glimpses ever – a rainbow at night! This ‘moonbow’ is created due to the constant spraying of water that is refracted by the moon light. Such a sight is visible in few places in the world apart from the Victoria Falls, like the Yosemite National Park, Cumberland Falls in Kentucky and Waimea in Hawaii. The best time to view the lunar rainbow at the Victoria Falls is during peak flood season, i.e. April to July.

In the Memory of Livingstone

While touring around Zambia and Zimbabwe you will notice that many of the names of streets and towns have changed since their independence, except the area around the Victoria Falls. Livingstone’s sighting of the waterfall is commemorated with his memorial statues in both countries. The district on the Zambian side is named Livingstone, and the same is the name of the island on the edge of the Victoria Falls, where David Livingstone first laid eyes on this natural wonder.

Are you in the mood for extreme adventure? Try swimming on the edge of the largest waterfall in the world. The Devil’s Pool on the Victoria Falls’ edge has attracted many adventure seekers from around the globe. Swimming in this pool is allowed only during the dry season when the water current is lower.