Home / Travel Tips / Things to Do in Sao Paulo, Brazil

Things to Do in Sao Paulo, Brazil

São Paulo is a gigantic city with towering skyscrapers on one hand, and crumbling sidewalks, view-blurring smog on the other. The city of São Paulo is also the financial hub of Brazil. The Opening Match of FIFA World Cup Brazil 2014 and other five matches will be held in the Arena de São Paulo. If you are planning to visit the city of São Paulo, you will not feel bored at all, as the city boasts of a number of interesting places to visit.

Things to Do in Sao Paulo

Here are some of the Best Places in São Paulo that you must visit during your tour of the city:

Get acquainted with the history of São Paulo by visiting this landmark. The Obelisk was constructed to honor the fighters who participated in the 32 revolution. It is called Obelisco Mausoléu aos Heróis de 32 in Portuguese. Galileo Emendabili designed the crypt of the mausoleum and created drawings of the dome.

The Obelisk of São Paulo

Edifício Itália, since its construction in 1956, has enjoyed the position of being the city's highest building for a long time. In order to honor the Italians who built it, the building was named as Edifício Itália. The visitors can enjoy the panoramic views of the city from the 45th floor, which houses a popular restaurant named Terraço Itália.

The beautiful São Paulo Metropolitan Church, featuring a neo-gothic style, is the cathedral of the Roman Catholic Archdiocese of São Paulo. Featuring the capacity to seat around 8,000 people, it is regarded as the 4th largest neo-gothic church of the world. The cathedral also has one of the largest church organs in Latin America. 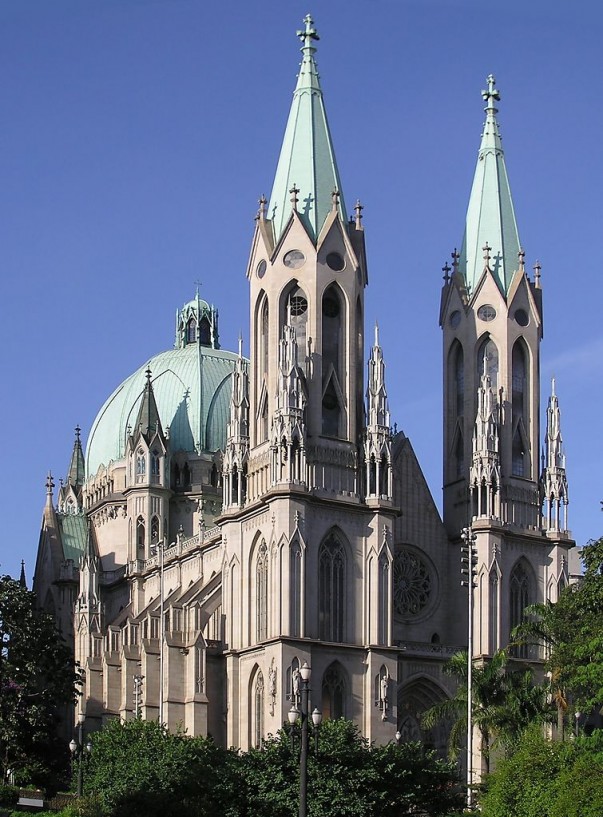 The Municipal Theatre of São Paulo was built after the city lost Theatre San Jose in a fire accident. The theater is the outcome of the efforts made by architects Ramos de Azevedo and Claudio Rossi. The construction of the theater began in 1903, and it was opened to the general public on September 12, 1911. In the due course of time, the theater saw many renovations. Out of the two major renovations performed, one was done in 1954, which involved the building of new floor to enlarge the dressing, reducing cabins and installation of G. Tamburini organ. The second one was conducted from 1986 to 1991, and it included restoration of the building along with the installation of modern equipment.

The Estação Júlio Prestes is a monumental railway station in the city. Its design was inspired from the Grand Central Station and Pennsylvania Station. Since 1999, the railway station is home to the headquarters of Orquestra Sinfônica do Estado de São Paulo. The huge halls of the station have been turned into a modern concert room.

Tip : If you are planning to visit this city, here is a useful map of Hotels in Sao Paulo, Brazil