Home / Travel Tips / Making the Most of 24 Hours in Delhi

Making the Most of 24 Hours in Delhi 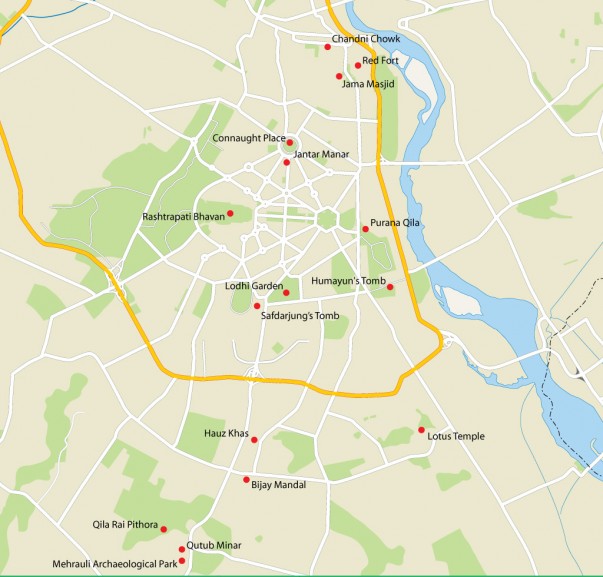 Not many cities in the world straddle so many centuries and cultures as Delhi. The relics of lost empires, the glorious tributes to the victors, and the stories of the vanquished abound the city that is now infinitely modern. From prehistoric relics to medieval monuments of mighty kings and fortified cities of powerful kingdoms to colonial sensibilities, the city is more rewarding than what you can ever anticipate.

So, if you have just a day to spare and wish to explore this enigma called Delhi, make the most of it by going out on a day-long tour. 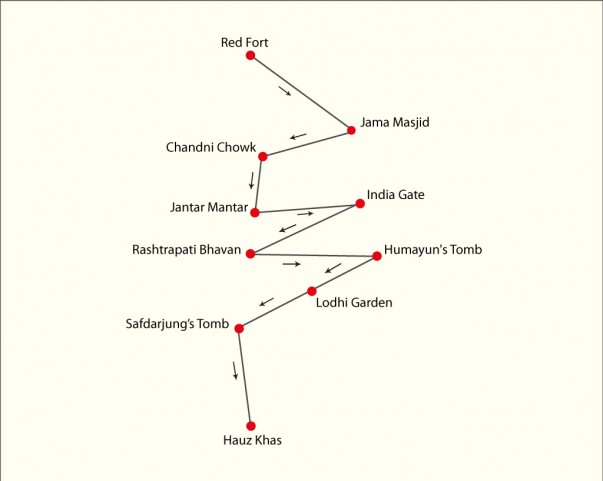 Route Map for the First Half of the tour 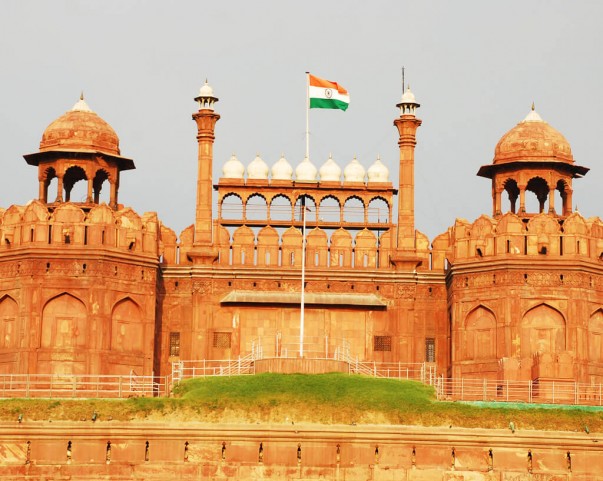 Red Fort — Once the Mughal bastion

Make a grand start to the day by entering the haloed precincts of the Red Fort through any of the six impressive gateways. Once the Mughal bastion, this 17th-century architecture in Central Delhi (or Old Delhi) is an epitome of splendor and prowess. From royal baths to Moti Masjid and music halls to gardens, the place is a reminiscent of the heyday of Mughals. 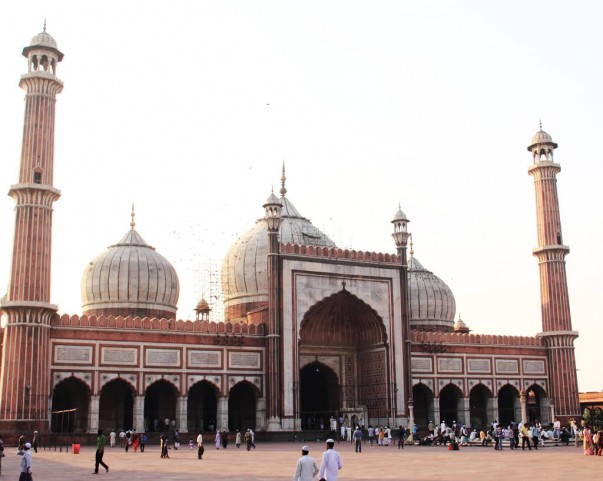 A similar overwhelming experience awaits you as you proceed to visit the Jama Masjid – the biggest mosque in the country. One of the jewels of Old Delhi, the mosque offers an amazing view of the city. This primary mosque of Emperor Shah Jahan was built with red sandstone and white marble.

Take a stroll down the Chandni Chowk and walk into any of the popular eateries to sample authentic Indian breakfast. This neighborhood in Old Delhi is abuzz with eateries serving locals and tourists for decades. 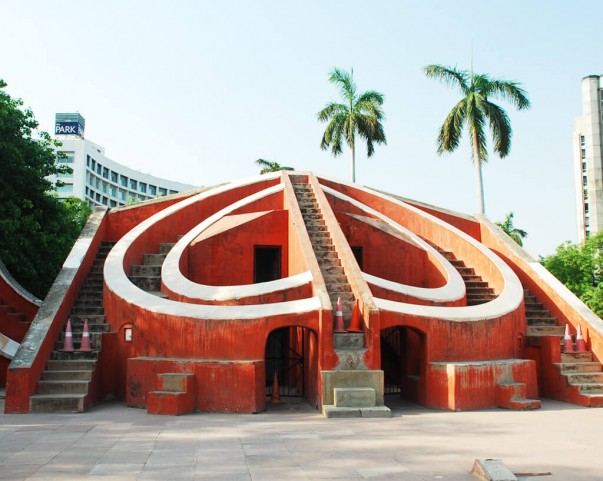 As you head towards New Delhi district, your first stop should be this 18th-century observatory that fascinates you with large astronomical instruments and their ingenuity. They may not predict the movement of the sun, moon, and planets but they do tell you of the progress that India had made long time back. 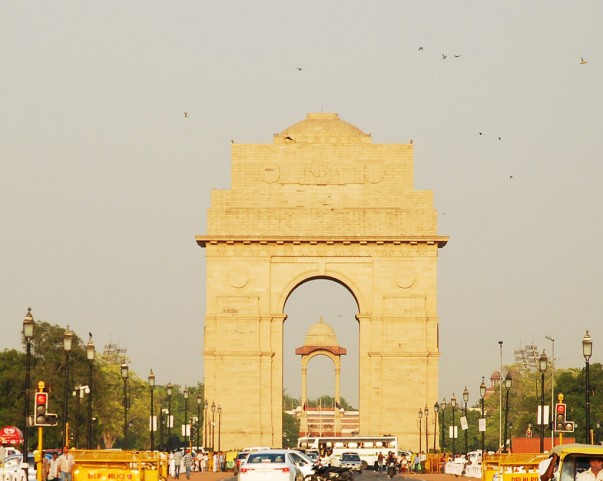 From Jantar Mantar, drive a few kilometers to the south before reaching the India Gate – an impressive war memorial built for the soldiers killed during World War I and Afghan War. 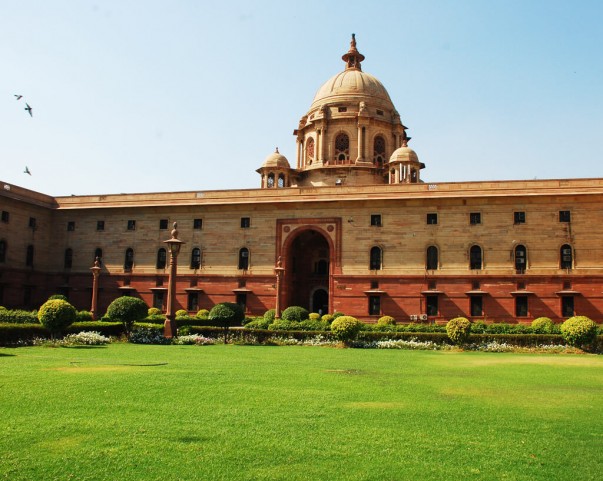 A couple of blocks away is the stately Presidential Palace – the Rashtrapati Bhavan. A brainchild of the British architect Sir Edwin Lutyens, this majestic piece of architecture houses the Lutyens’ Gallery, Durbar Hall, Ashoka Hall, and Gift Museum. Wandering around the beautiful Mughal Garden is truly a special feeling. 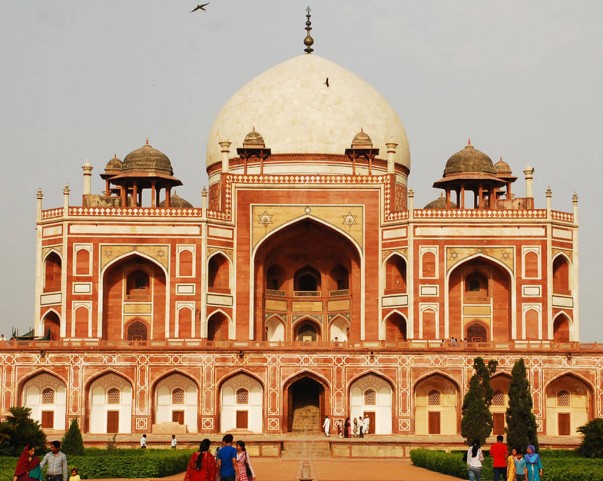 After a brief rendezvous with the colonial era buildings, it's time to hark back to the Mughal era. Enjoy a 6-km drive through the tree-lined roads of Delhi and visit the Humayun's Tomb. This 16th-century tomb of Mughal Emperor Humayun in Southwest Delhi is believed to have introduced the concept of four-quartered garden into Mughal architecture. This UNESCO World Heritage Site has inspired several architectural innovations including the Taj Mahal. 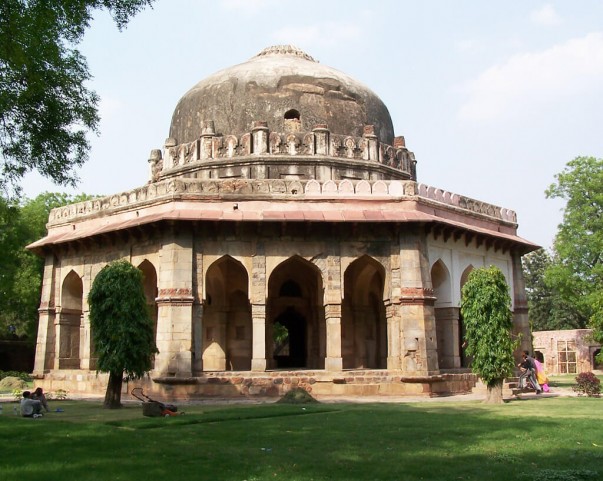 After you have explored this first garden-tomb in the Indian subcontinent, move on to Lodhi Gardens. This 90-acre garden surrounds the monuments of 15th and 16th century rulers including the much talked about three-domed mosque. This is where the nature is bounteous and architecture is impressive. Lush green cover, twittering of birds, and the National Bonsai Park are the very soul of this place.

Your next destination should be the Safdarjung’s Tomb. It's not just another mausoleum of marble and sandstone that you encounter, but one of the last feathers on the crown of Mughal architecture. This 18th-century tomb is imposing and inspiring. The ornamental paintings on the tomb betray the decadence of the Mughal Empire.

When it's time for a hearty lunch, either opt for the Lodi Garden Restaurant, which is just a walk away, or head to Hauz Khas and try out places like Farzi Cafe, The Big Burrp Theory, and The Project at Park Balluchi. 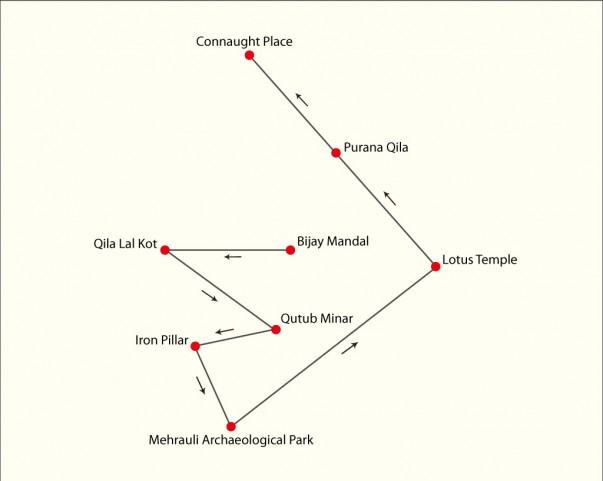 Route Map for the Second Half of the tour 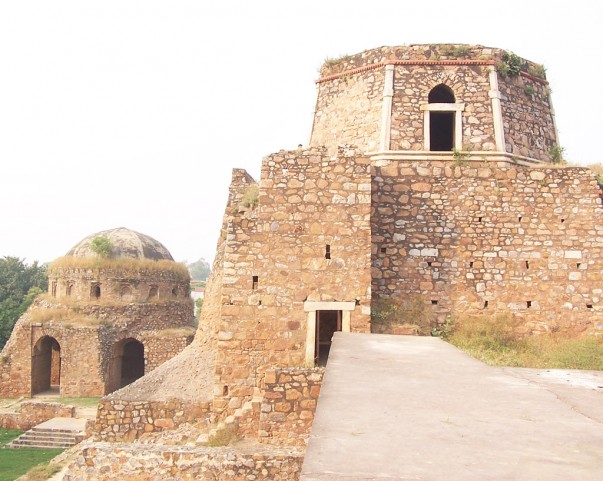 Bijay Mandal — a 14th-century structure that now stands in ruins

Within few minutes of enjoying contemporary cuisine in a chic cafe, the trip takes a sudden twist and you find yourself in the midst of a 14th-century 'thousand-pillared' palace (as archeologists claim) that lies in shambles. As historians tell us, Bijay Mandal is the place from where Muhammad Bin Tughlaq used to take strategic and administrative calls since it was a part of one of the four cities of Delhi Sultanate. 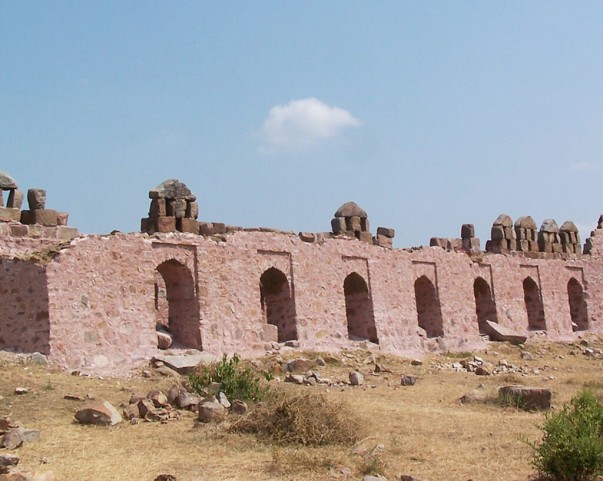 Now, it's time to visit the first city of Delhi. Yes, Lal Kot is an 11th-century fortified city in South Delhi that was built to halt the attacks of Mahmud Ghazni. Once you climb the earthen and stone steps of one of the oldest defense structures in Delhi, you enjoy the view of Qutub Minar from a hand-shaking distance. 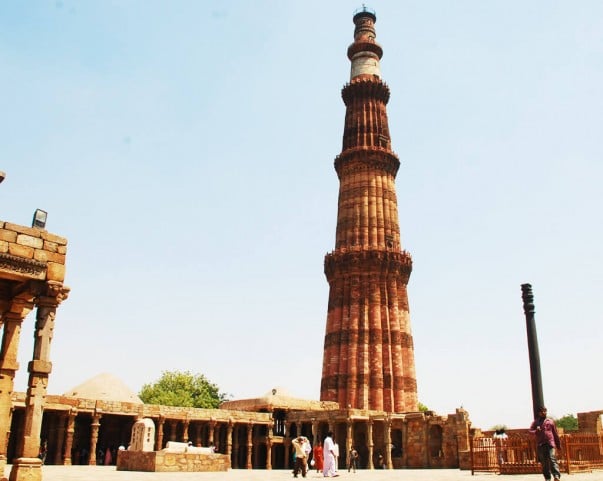 Qutub Minar — The tallest brick minaret in the world

Well, the moment you enter the Qutub Complex, this tallest brick minaret in the world catches your attention. Built on the ruins of Lal Kot, this monument is rich in symbolism as it marks the end of Hindu rule and the beginning of Muslim rule in India. India’s first ever mosque, Quwwat-ul-Islam, is located at the foot of this 73-meter tall tower. The corrosion-resistant Iron Pillar in the Qutub complex is a metallurgical wonder. It bears inscriptions dating back to the 4th century AD. 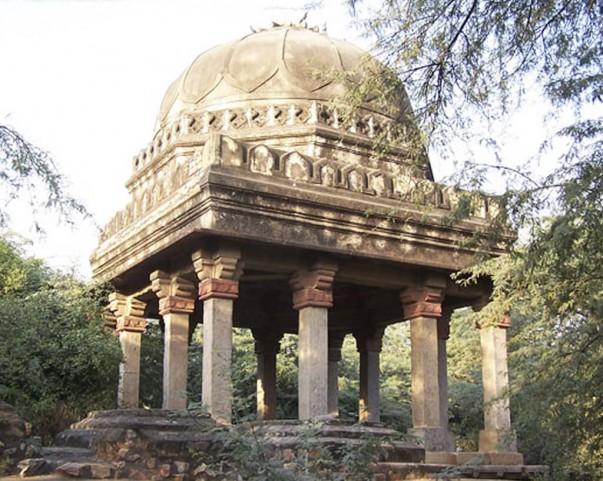 Adjacent to the Qutub complex is this archeological area. Commonly known as Jamali Kamali, this Park has more than 100 historically significant monuments including the architectural relics of Khilji dynasty, Tughlaq dynasty, Lodhi dynasty, and the Mughal Empire. 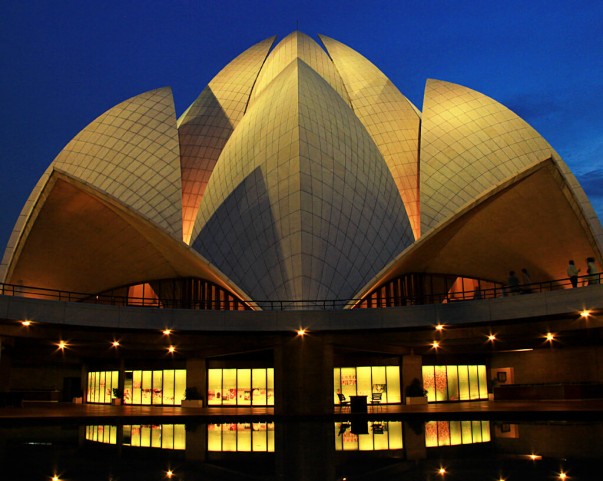 As the dusk approaches, you get to see the Lotus Temple in its full glory. This is one of the seven major Bahai temples built around the world and also an architectural marvel. This structure of pure white marble looks splendid against the backdrop of scarlet sky. 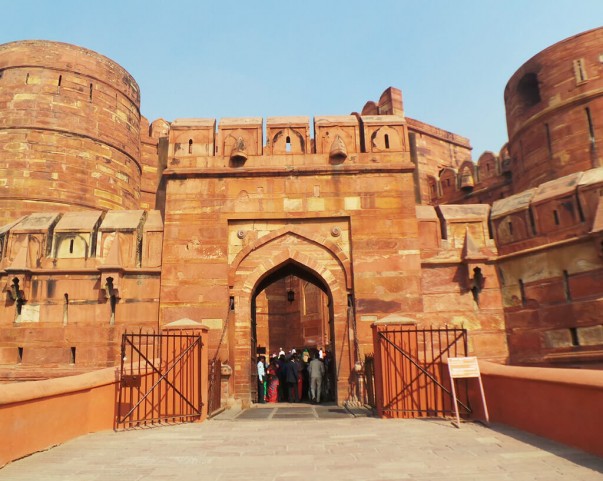 Old Fort — one of the oldest forts in Delhi

A 30-minute drive towards Pragati Maidan in Central Delhi will take you to one of the oldest forts in Delhi. This is a place where history runs deep. The fort, which had sheltered about 3,000 Japanese civilians from British-ruled Asia during the World War II, is believed to have signs of Indraprastha – the city that finds a mention in the epic Mahabharata, which dates back to 4th century BC.

Dining and wining shall happen in Connaught Place. The largest commercial hub in Delhi is the best destination in Central Delhi to hunt for restaurants. Check in at the Zizo for Lebanese and Mediterranean cuisine or opt for Side Wok to sample authentic Chinese and Japanese dishes. If you are in a mood to indulge in Mughlai and Indian cuisine, come to Zaffran.