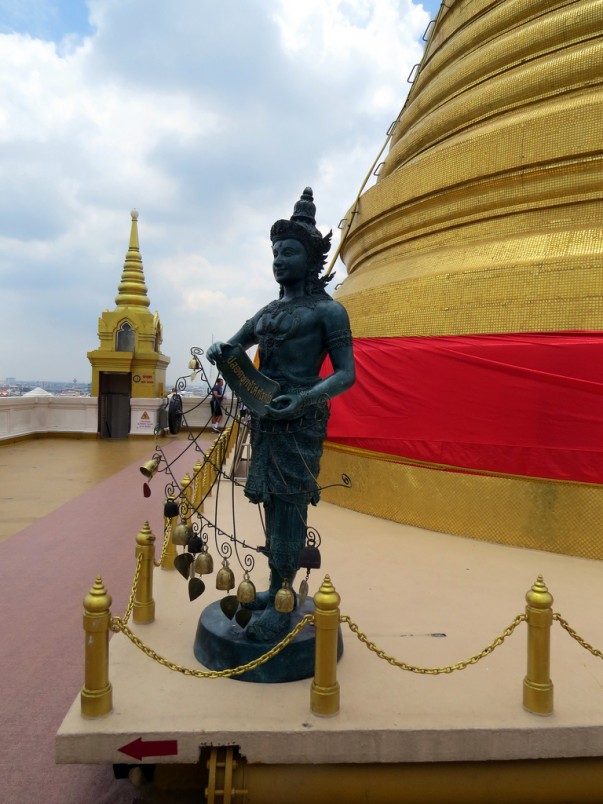 Wat Saket - one of the most popular landmarks of Bangkok.

Known for its Golden Mount (Golden Chedi), Wat Saket is one of the most popular landmarks of Bangkok. King Rama III started the construction of Wat Saket that was later completed by King Rama IV. Housing sacred relics of Buddha, Wat Saket rests peacefully atop an artificial hill with a height of 80 meters. Rama IV restored Wat Saket by bringing 1,000 teak logs to save the Wat from sinking in to the swampy ground. It was Rama V, who built the famous Golden Mount in order to place a relic of Buddha that was given to him by the British.

Dating back to the 19th century, Wat Saket or Phu Khao Tong was used as a restoring ground for about 30,000 bodies that died during a plague during the reign of King Rama II. In contrast to the beautifully adorned Golden Mount lies the plain brick plaster base but in spite of all this contrast, Wat Saket is a place worth visiting during your tours to Bangkok. The 318 steps are worth climbing to reach one of the most sacred sites in Bangkok. All this to enjoy a panoramic view.

The Temple Fair celebrated every year during late-October to mid-November at Wat Saket is a grand affair in Bangkok. During the fair, the Golden Mount of Wat Saket is wrapped with a red cloth, with people dancing and getting merry performing theatrical performances.