Home / Tours / Top 10 Most Haunted Places Around The World

Top 10 Most Haunted Places Around The World

The subject "haunted" has such an irresistible appeal that after a gap of time, it gives me a compulsive adrenaline rush to research upon the most haunted places in the world. Looking at the good response received on the 'Top 10 Haunted Hotels Around The World', I targeted my hunt to discover the most haunted places on the earth. According to my findings, based upon internet research, the places of mishaps or accidents have become an abode of the ghosts of the people who died due to miseries or agonies. 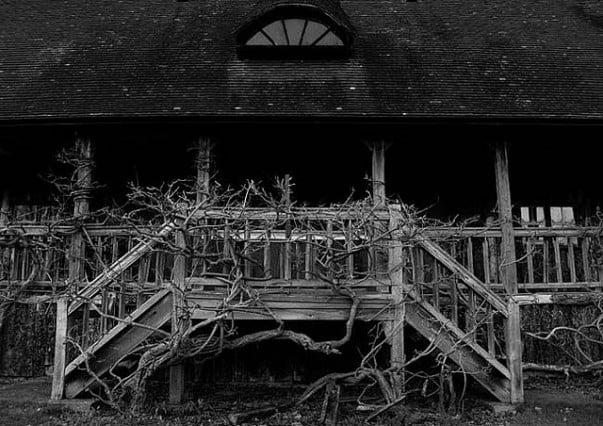 From the barren fields to the populated edifices;
the ghosts have made almost all the places in the world their dwellings.
Unlike us, they don't discriminate,
whether it is a lunatic asylum in Australia, or a penitentiary of the Eastern State;
Hotels, prisons, chateau, or the government buildings – are all their residences.
The places with maximum reports of hauntings,
are later found in a state we call desolate.
Will they stay around us or will they find solace?
Whatever their fate is; the truth about them is beyond our findings.

Tread in the cold, desolate building of the Beechworth Lunatic Asylum at night to feel the chill in your spine. The asylum was previously known as Mayday Hills Lunatic Asylum. Hear the stories told by the guides on your tour. Discover how the lunatics lived in the asylum and how the institution worked during the 1860s. After about 128 years of operation, the asylum closed down due to the death of about 9,000 inhabitants. Spotting a ghost during the tour is a matter of luck. However, the aura of the asylum and the stories narrated by the guides yield a spooky effect. These days, the day tours are also organized by beechworthghosttours.com.

The notorious Tower of London featuring the history of executions and torment, dating back 900 years, is known as one of the haunted places in the UK. Out of the many spirits that live in the tower, the most popular one is a beheaded ghost of the wife of King Henry VIII – Anne Boleyn. One of the most scary apparitions in the tower is of the two children clad in nightgowns. They wander together, holding hands, as if terrified. It is said that they are the ghosts of the two former Princes, who were sent to the tower after they were declared illegitimate by the Parliament. Both the children disappeared one day and it was presumed that they were assassinated on the orders of the Duke of Gloucester, who was their kinsman. 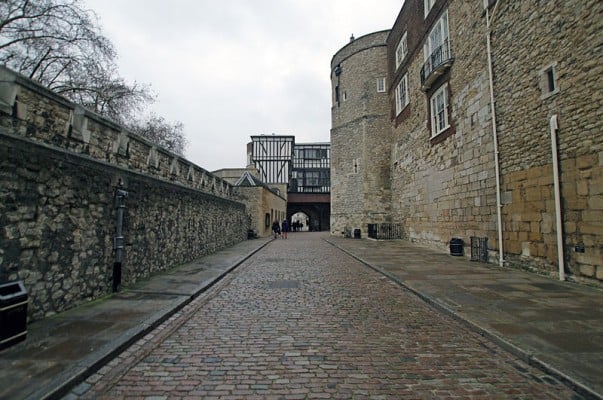 Inside the Tower of London

The Eastern State Penitentiary was the world's first authentic penitentiary in the real sense, as it was designed to evoke remorse for the wrong deeds done by the convicts. This most expensive prison of the bygone era stands in ruins today. Another world dwells behind the crumbling walls of the prison. Many people have ventured into the prison to meet the current inhabitants – the spirits. The American Paranormal Research Association (APRA) conducted a Paranormal Investigation of the Penitentiary in June 2010. Surprisingly, the crew was able to talk to one of the ghosts, who said that he stays "always in the cell" and "he is annoyed", "inside of him". Scary? See the video yourself:

You can book tours of the Eastern State Penitentiary at easternstate.org.

In one of the coverages of the Australian Broadcasting Corporation (ABC) Television, presenter Justin Murphy did ghost hunting in the Princess Theater. His talks with the people working over there and others revealed that the ghost of Frederick Baker, famous as 'Federici', who died unexpectedly, during his last performance. When the theater company announced the death of Federici, the performers got shocked and said that he took a bow with them. A ghost was born upon his death. Even the cemetery seemed to be possessed. The clergyman swooned when the casket was lowered, so the pallbearers completed the service. Visit the theater, you may get a chance to see the apparition of Fedrici. It is said that he makes appearances onstage, during the rehearsals, or he may choose to bow at the end. 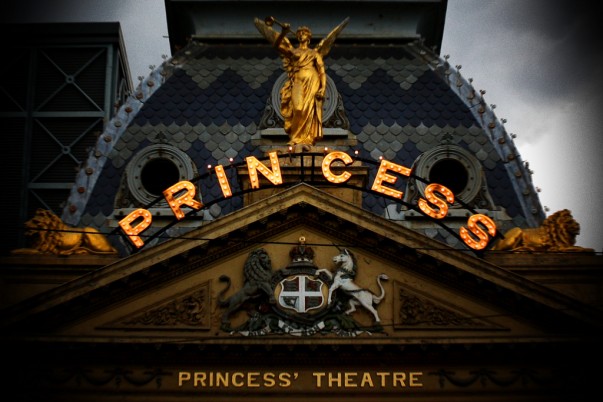 The Travel Channel's America's Most Haunted has ranked the Whaley House as one of the most haunted houses in the US. The Whaley House in San Diego's Old Town neighborhood, has allegedly become a haunted place. Most of the speculations point out that one of the ghosts that lives in the house is of Yankee Jim, (also known as Santiago Robinson), who was found hung in the house. Even though Thomas Whaley witnessed the execution, he bought this property and built a home for his wife. They reported of sounds of heavy footsteps, perhaps of Yankee. Some of the visitors have reported encounters with Thomas Waley. The presence of cigar smoke and perfume also hint at the presence of Waley and his wife Anna. Another apparition present in the Whaley House is of a young girl in a long dress. She is often spotted in the dining room. Don't believe? Watch the video proof of the Family First Paranormal:

You may also see the photograph of one of the ghosts captured by one of the visitors:

Book your tour of the Whaley House at whaleyhouse.org. You may get a chance to spot the ghosts living in the house.

The three-day battle of Gettysburg took the lives of more than 50,000 young soldiers. Some of them accepted their end, while others still hang around in the battlefield, unaware of the fact that the battle is over. They are still on a hunt of their rifles, and comrades. The pictures and videos shared over the web provide an ample of evidence for the existence of the paranormal in the Gettysburg field. Several companies offer tours of this haunted place. Interested to jump in the field on a ghost hunt? 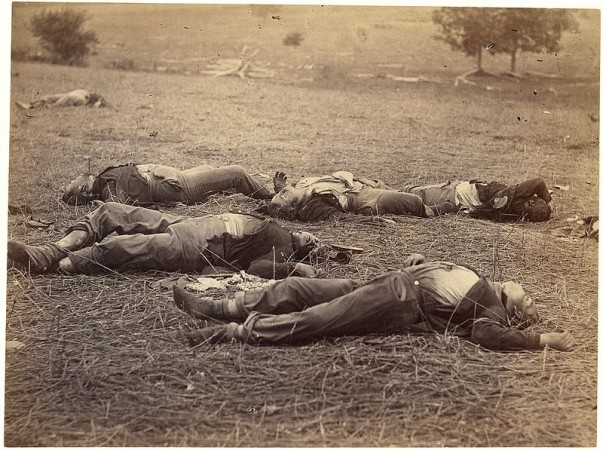 The outbreak of 'White Plague' in Kentucky led to the construction of the Waverly Hills Sanatorium in 1910, a two-story hospital to admit 40 to 50 tuberculosis patients. The methods of treatment were horrific. In an endeavor to find the cure, the doctors even removed the organs of the patients. Over 6,000 patients died and some became lunatic. In 1962, due to the discovery of a suitable drug, the hospital saw its demise. However, it stands as one of the eeriest places in the US. Ghost hunters and paranormal investigators have revealed the existence of desolated cold spots, screams, other unexplained noises, and shadows.

Situated in Weston, the Trans-Allegheny Lunatic Asylum (the Weston State Hospital) operated in the 1800's. This historically significant building is the largest hand-cut stone freemasonry in North America. In the beginning, the hospital was constructed to accommodate about 250 people. Later, in the 1864, it was jam-packed with 2,400 patients. Due to its poor maintenance and eclension of the facility, it was shut down. Currently, the asylum has become a part of the heritage of the country. It is believed to be haunted. Sights, sounds, apparitions, apprehensions, mystery, and paranormal activity, is what you will experience in the asylum, while on a ghost tour.
Watch the video with an exclusive coverage of the EVPs:

The asylum is open for historical as well as ghost tours. You may check out the details at trans-alleghenylunaticasylum.com

Can anyone believe that the residence and office of the President of the US is haunted? It was a surprise for me as well. According to findings, several areas of this prominent building are found to be haunted. The attic above the Oval office is believed to be the inhabiting place of the late president, William Henry Harrison, who served a very short duration as a president. The ghost of former President Abraham Lincoln was seen and heard by many people, including First Lady Eleanor Roosevelt. The majority of the ghosts residing in the White House are of the former presidents and their wives. It seems like they didn't want to leave the rule, thus they are still occupying the building. 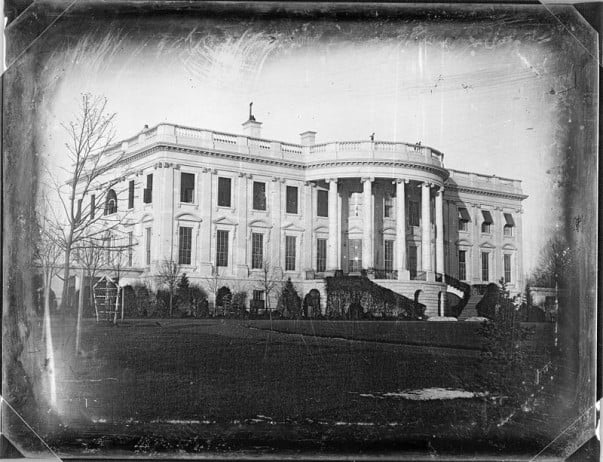 The While House in USA

One of the haunted places in the US, the Willard Library has a friendly ghost of a Grey Lady. Several employees have reported the existence of the apparition narrating the stories of their encounters with the ghost. The Willard Library holds ghost tours every October. Book your tour to see the Grey Lady. Check out willardghost.com for more details.
Watch the interview of Director Greg Hager talking about the ghost of the Grey Lady at the library: