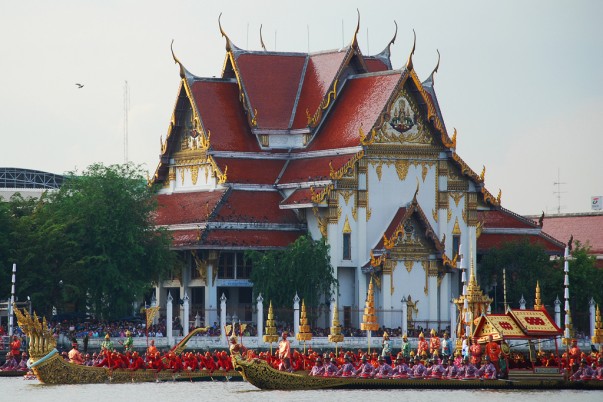 As the name suggests, the Royal Barges houses a rich collection of barges (boats). Don't miss the golden opportunity of visiting the Royal Barges Museum during your tour to Bangkok. On display in this museum are several barges with unique designs that were used on royal and government occasions. Formerly used as war vessels, the barges in the Royal Barges Museum of Bangkok are worth watching to get a feel of the craftsmanship of Thailand.

Bows of the barges are artistically adorned with a variety of figureheads taken from the famous Thai mythology, Ramakian. 'Suphannahong', resembling a mythical swan, is the most well known barge kept in the Royal Barges Museum. The king used it at the time of river procession for the Kathin Ceremony that is held during October or November. 'Narai Songsuban Ratchakan Thi Kao' is another popular barge in the Royal Barges Museum. Built on the occasion of the Golden Jubilee of His Majesty, it is the latest addition in this museum.

If you are lucky enough you might even get to see these sparkling barges gliding through water. Those who miss seeing these barges floating can plan to visit Bangkok during Thai New Year, when a grand procession of barges takes place. A visit to Royal Barges, one of the most fascinating Bangkok tourist attractions, enables you to explore all this much more. The best way to reach the Royal Barges Museum is by boat.

Entry Ticket: 30 Bahts per person for foreign tourists and extra payment of 100 Bahts for photography and video recording.