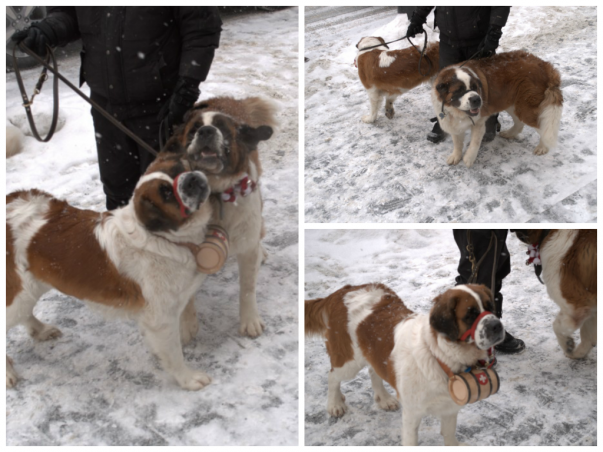 During my stay in Montreal I came across with several surprises. First I came across with the "Lumino therapy" then I saw some strange Dogs which were having a barrel attached to their dog collars. As a matter of fact a red cross was engraved on those Barrels ! Out of curiosity I went to the owner and asked him that what was it about ? He explained to me about the brief history of St. Bernards (the dog which was carrying a barrel) and how they acted as rescue dogs during the freezing winter season. Actually, those dogs carried nothing but alcohol (mainly brandy) in those barrels.

Me to owner : "So, what would they do with the brandy they are carrying ?

Owner : I will tell you what they would do with it. As you know that dogs are very good in sniffing and discovering things, they would immediately know about someone who needs help ! For example if someone is buried under heavy snow in an avalanche then these dogs would help us to find him out and then we can treat him on a temporary basis by feeding him some alcohol that he has been carrying !

Me: Whoa ! *Isn't that so thoughtful and generous of these people to help like that !

Excited after knowing all this, I sat down with my laptop and did some research about this. Soon, I figured out that these kind of mountain rescue dogs were originally trained to rescue the people in Switzerland. They helped many people who get stuck in avalanches and snowstorms ! Aww.. Isn't it exciting to know that how these pooches have become an integral part of our daily lives !

« Montreal Planetarium How to Prevent Bloating - Foods and Beverages to avoid when flying! »