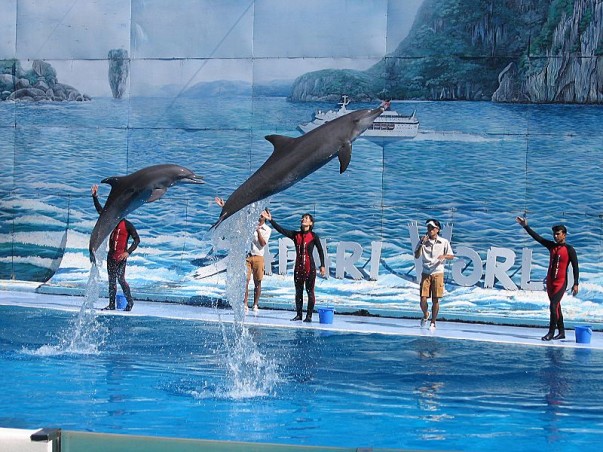 Safari World, Bangkok is one of the most popular Animal and Leisure Park

A tour to Bangkok is just incomplete without a visit to Safari World. Spread over an area of about 300 acres, Safari World Park is divided in to four sections, namely, Safari Park, Bird Park, Games Corner and Macaw Island. A journey through the Safari World will no doubt turn out in to one of the most memorable events of your life. Witness the picturesque African settings with intimate encounters with dolphins, orang utans, seals, birds and other such animals and birds at the adventurous Safari World, one of the most popular Bangkok tourist attractions.

Kindle your adventurous spirit by watching cowboys and bandits jostling for power and performing life-threatening stunts in the very exciting Hollywood Cowboy Stunt Show. The chirping of beautiful birds won't remain unheard by the visitors during the Bird Show. Immerse yourself in a romantic mood seeing the lovebirds courting each other at the Bird Show.

Don't miss the ultimate visual extravaganza called Spy War Show at Safari World. Featuring breathtaking para-trooping stunts coupled with special effects is the great Spy War Live Action Show. Fun loving Seals await your arrival at the Sea Lion Show at Safari World Park. Tourists are advised to be alert while walking in the Safari World, as none knows when a gorilla comes to welcome you by snatching your stuff.

Safari Park: Watch the rare and endangered species roaming around in their natural habitats in 45 minutes long drive through the mysterious Safari Park. Watching the Tiger & Lion Feeding Show will be an experience of a lifetime during your visit to the Safari Park.

Orang Gutan Boxing Show: Have a close encounter with your closest cousins, who will not fail to make you fall with laughter. Don't dare miss the funniest champions boxing at world's first and only Orang Utan Boxing Show. Be amazed watching the mathematical gifts of these crazy yet lovable creatures during your visit to the Safari World.

Jungle Cruise: Do take a fun-filled water ride through the mysterious reeds of Safari World. It takes courage to go for a Jungle Cruise, as you will be interrupted with various horrifying creatures while you sit calmly in a boat. Be prepared to have an eye-to-eye contact with a hungry crocodile or primitive headhunters during your Jungle Cruise ride.

Marine Park: Marine Park is indeed a great place for kids. Apart from featuring an array of shows, Marine Park is a one-stop platform to let your kids know more about different animals. Have a great time watching 8 exciting world-class shows at the Marine Park located inside the Safari World in Bangkok.