Places to visit in Downtown Toronto 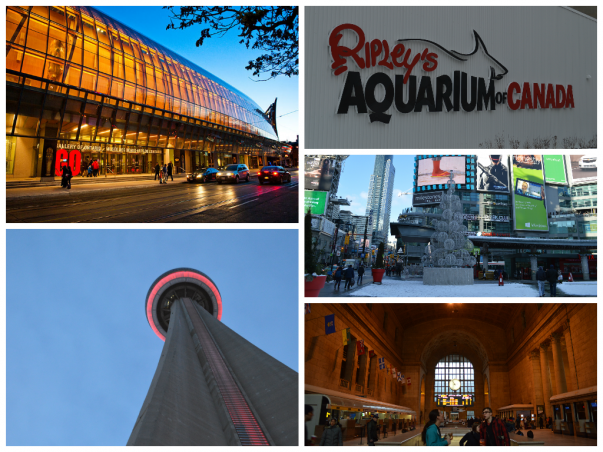 Must visit attractions of Downtown Toronto

Downtown has always been and I guess would be, the power-packed powerhouse of the city of Toronto. If you want anything ranging from a pin to a plane, there is one stop for everything in the city - Downtown! Although it lacks cultural appeal, it has the maximum number of Toronto's tourist attractions. Just in case, if you are thinking that this place is lacking a cultural appeal, (*halt !) it is a must-see place for architectural enthusiasts as it has many architectural marvels, viz. skyscrapers!

Places to visit in Downtown Toronto

A must-see for art enthusiasts and art lovers. It contains art works which range from as old as hundreds of years to the most recent art works of  budding artists.

Yes, the CN Tower is the iconic landmark of Toronto city. Located near Lake Ontario, it gives a spectacular 360 degree view of the whole city.  Besides serving as a telecommunications hub, the tower provides world-class entertainment and a wide range of unique attractions, exhibits, and food and beverage venues.

Ripley's Believe It or Not Aquarium

Ripley's Believe It or Not Aquarium displays more than 100 varieties of fishes and other sea creatures captured from around the world including the great Ontario lake. The best part in the aquarium is the conveyor belt which takes you through the glass tunnels where one can see the animals and fishes like Sharks, Hammerhead sharks, Stingrays, jellyfishes, etc. Being in that part of the museum was an exhilarating experience for me!

Nathan Phillips Square is a vibrant, active space in the heart of the city. It is a place where Torontonians gather, share memories, and welcome the world. Located in between two important streets i.e., Bay Street and Queen Street West, it is one of the largest spaces for public exhibits, cultural shows, rock concerts, and special public gatherings.

It is one of the landmarks of the city because of its cultural importance. Apart from that, it has the connectivity to every nook and corner of the city as all the modes ply from here.

Being of the landmarks of the city, Downtown can be accessed through numerous buses, subway and street cars, which ply in the 16 km. long region!