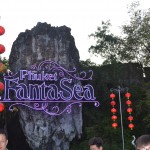 Phuket Fantasea – “a Sea of Fantasy” 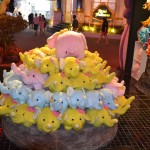 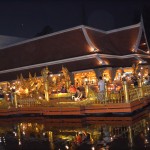 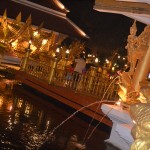 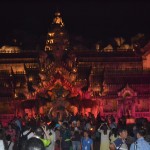 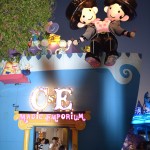 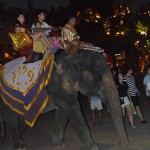 There were a lot of things that were going on in my mind as I made my way to the island of Phuket in Thailand. I expected miles of serene beaches, scrumptious cuisines, and refreshing drinks, but what I didn’t expect was a cultural extravaganza called Phuket Fantasea – “a Sea of Fantasy” – a happening mix of Thai myths and legends with fancy variations of fun fair and Las Vegas-style pomp and show.

When we reached Phuket Fantasea, the first thing I noticed was a grandiose Sukhothai-era stone palace; its architecture and décor seemed like a mishmash of traditional Thai styles and Disneyland. The second thing I noticed was the crowd at this grand cultural theme park. It was full of tourists like us. As our show was slated to start at 9:00 p.m., we had plenty of time to check out the place and take lots of pictures.

Well first things first; what you will find everywhere in Thailand are elephants and Phuket Fantasea was no different. There were elephants walking past you, elephant rides you can enjoy, elephants you could take pictures with, and even stuffed elephant toys you could buy. However, when this all-about-elephant tour was over, we decided to check out the Tiger Jungle Adventure, where we saw majestic white tigers, white crows (strangely enough for me), and finally white peacocks in a very elaborate enclosure that they call a “theatrical safari.”  We then headed over to the Carnival Village, which was like a journey through Thailand's history. It had shops selling locally made silk scarves, handicrafts, ceramics, leather, trinkets, souvenirs, unusual items related to elephants and Siamese twins, etc. Well, we picked up a couple of plush dolls as souvenirs and headed to the Hanuman’s Lair. The lair was full of games and there was the king of monkeys playing tricks.  While that was an exciting surprise for kids, for moms and dads, there was the Kamala Pier Beer Garden, full of cheers and fine music.

Before I move on to the food part, let me tell you that when you are buying a ticket for Phuket Fantasea, you will have an option of buying a ticket that includes buffet dinner and one that doesn’t. I would advise you to pick the former even though it costs a bit more. Well roaming around, we had built up quite an appetite, so we moved on to grab a bite. The buffet was served at the Golden Kinnaree Restaurant. When we entered the restaurant, we were stunned for a couple of seconds seeing this humongous structure draped in splendid hues of gold, red, and white. When we saw the menu, it was a ‘Royal Feast’ ­– Thai, Japanese, Chinese, Indian, Mexican, Korean, European, and other international cuisines with separate sections for vegetarians, non-vegetarians and vegans, apart from a Halal food section. Well as we had opted for buffet, we loaded our plates and made our way to the grand dining area.  As for the food, it wasn’t the best I had in Thailand, but it was still pretty good.

By around 7:30 p.m., we made our way to the Viva Bangkok Stage Theatre, where they had put on a show about the city of Bangkok. The show lasted for about 15 minutes and was a good warm-up before the main show that was going to be the finale.

Before the show, we had the chance to take a picture with a cute little tiger. However, it was so crowded that we decided to skip it and go straight for the show. At about 8:30 p.m., we made our way to the Palace of the Elephants; but before we entered, all our devices that could be used to record the show such as cameras, video recorders, and even phones were confiscated and in return, we were given colored tokens to be shown at the counter to collect our gear after the show.

The show - the Legend of the Kingdom - was an extravaganza unlike anything I have ever seen – with lights, music, dancers, actors, and a myriad of other interesting things. The highlight of the show was the towering figure of Prince Kamala astride a magical elephant. While the story was very confusing, the performances were more than enough to keep us entertained. The show also featured a number of animals such as buffalos, elephants, goats, and even chickens and all of them were well-trained. The elephants danced with each other and the performers with surprising grace and the chickens walked in a straight line without anyone instructing, which kind of amazed me as the stage was huge and there were many things on it. However, the highlights of the show in my opinion were the trapeze artists with glow-in-the-dark body paint who looked like they were flying through the air without any help. At the end of the show, which was about two hours long, hundreds of balloons were dropped from the ceiling, which was our cue to start leaving the theater.

After collecting our gear from the collection counter, we made our way to the exit. We were happy but exhausted and all we wanted to do was to get to our hotel rooms and sleep. When we reached the exit, we were asked about the location of our hotel and led to a cab that was waiting to take us to our hotel and bring our day’s adventure to an end. Well, the extravaganza ended there, but the memories will surely stay in for long.