The National Maritime Museum located in Green, which beside the Greenwich Park is UK's most renowned maritime museum. The museum is home to a bewildering array of maritime artifacts which includes navigational equipment, charts and maps, coins and medals, flags, ship models, timekeeping, uniforms and weapons.

The museum premises also houses the Queen's House, which has been declared as a World Heritage Site by UNESCO in 1997. Apart from the magnificent Queen's House, the historic Royal Greenwich Observatory too is located inside the premises.

The Oceans of Discovery Gallery provides a fascinating insight to mankind's love affair with the oceans of the world. At this stupendous maritime museum, you will find answers to questions like how did man find his way across oceans? The gallery has five wings - Navigation, Maps, Science and the Sea, Exploring the Poles and Under the Sea. Needless to say, each section is more exhilarating than the other.

First time visitors are spellbound by the manner in which the museum portrays the exploits of earliest explorers who navigated around the world with very simple navigational tools. The incredible voyages of Polynesians, Vikings, Greeks and Romans have been depicted rather skillfully.

As far as mapping the world is concerned, the museum delves deep into the significance of maps and human being's success in circumnavigating the world ever since the invention of maps and charts.

The museum also investigates how science has made an impact in the way people undertook voyages. The polar regions too are covered at this museum. The harsh climatic conditions and the desolate landscape have always posed great challenge to explorers. The museum investigates how Robert Scott and Ernest Shackleton undertook expeditions to the icy South Pole in spite of insurmountable odds.

The museum provides fascinating insights into the evolution of recent under water explorations, which are just three decades old. The museum interprets the manner in which mankind has made its foray into the depths of the world's oceans and explored the deepest realms of our ocean beds, thereby uncovering many hidden secrets.

The museum regularly conducts special events, study sessions and exhibitions for visitors. So try to coincide your trip when there is something that is of interest to you.

Should you plan to visit this museum, here is a useful map - 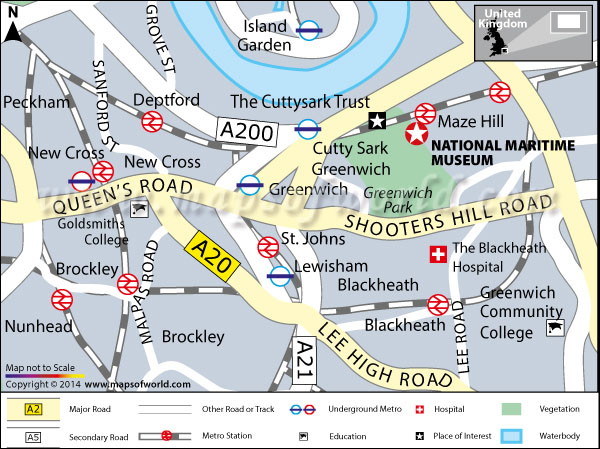