Home / Tours / Monumental Axis - is it really the widest road in the world?

Monumental Axis - is it really the widest road in the world? 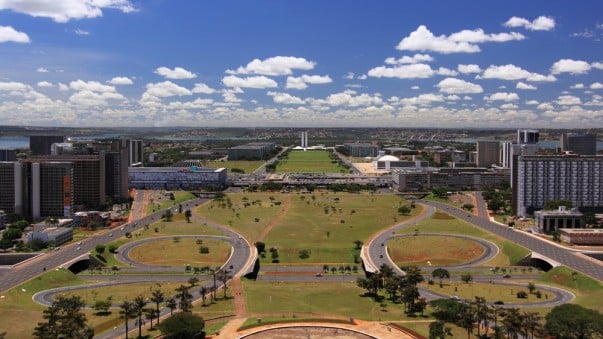 For those who do not know what is Monumental Axis, let me tell you that it is the name of the two parallel highways in the futuristic capital city of Brasilia, running from the East to the West direction. This road connects various government buildings of the new city. The Monumental Axis begins in the Three Powers Square, and extends to the west till the inter State bus station.

Oscar Niemeyer's most famous buildings were built here. His remarkable work can be seen in the way he attained a balance between the horizontal and vertical buildings. His ultra-modern conceptions show a harmony in the usage of the rectangular and curved surfaces. Some of the prominent buildings built near this road are the Planalto Palace, Cathedral of Brasilia, Justice Palace, and the National Congress.

This road, in the true sense, is the core of Brasilia. If you travel from the east to the west, you will also see the National Theater, the Television Tower, the Estádio Nacional de Brasília Mane Garrincha, the Palácio do Buriti, and the JK Memorial. The Estádio Nacional de Brasília Mane Garrincha has been chosen as the venue for FIFA World Cup 2014. From the top of the Television Tower, you can enjoy a bird's-eye view of the road.

Some people say that it is the widest road in the world and about 160 cars can run on it side by side. However, this is not true, and it hasn't been documented anywhere. Yet, it is today identified as one of the landmarks of the city of Brasilia.

If you have booked the tickets for FIFA, do not miss to take a complete tour of the Monumental Axis and its monumental buildings.