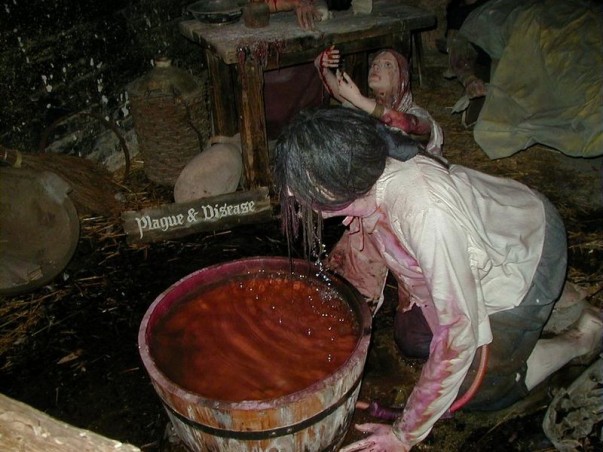 Plague and death scenes being simulated at the London Dungeon

London Dungeon is a museum where some of history's most horrific acts have been simulated, evoking the carnage and mayhem of the past. A visit to the London Dungeon takes you on a voyage to the sinister side of Europe's past.

The museum, which opened way back in the year 1975, is located beneath one of London's busiest Railway station - London Bridge Station. It must be said that the London Dungeon is not for the fainthearted. Having said that, kids in particular seem to enjoy the goings on inside the museum.

Once you go inside the museum, expect the worst visuals you ever witnessed in your life. Gruesome scenes of people being beheaded, people being executed, the simulated plague, the great London Fire and much, much more are showcased in such astonishingly realistic manner that the experience of your visit to London Dungeon remains etched in your memory for a long, long time.

The very fact that you are provided with a platform to view 2000 years of some Europe's most frighteningly genuine history in itself should be reason enough for you to visit the museum.

The live acts of horror are nicely complimented with state of the art multimedia display. For instance, you can experience walking on the streets of Victorian England when Jack the Ripper ruled the streets of London or, for that matter, see people being beheaded which also includes Henry VIII's wives.

The recreation of the Plague as well as the Great London Fire is astonishing and never ever would you feel that you were witnessing a replicated version and not the real bit.

Even the entry to London Dungeon is guarded by intimidating characters who are dressed in dreadful costumes and wait for the appropriate time to jump upon the innocent visitor.

All in all, a visit to the London Dungeon is an education in itself and especially for kids; it's a far better way of learning, rather than sitting in the classroom. While you leave the museum don't forget to drop in at the gift shop. Unusual souvenirs ranging from plastic skulls, horror DVDs and the unmistakable T-shirts are all there lined up for you.