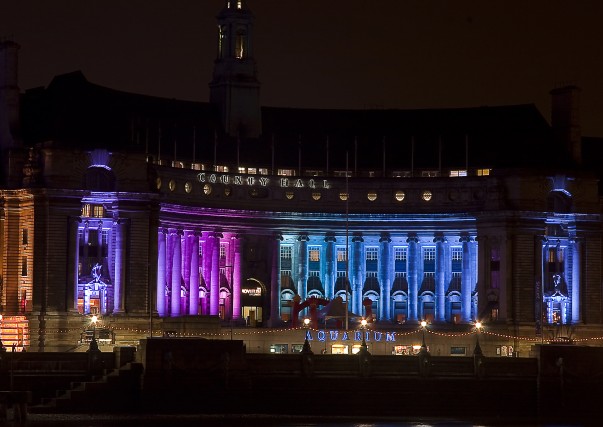 The magnificent London Aquarium at Night

The London Aquarium located at the Country Hall Riverside Building, is one of the Europe's largest aquarium. The fascinating world of oceans, rainforest, seashores, beaches and tropical freshwater comes alive at this astonishing aquarium.

London Aquariums Undergoing Wide Conservation Efforts
Apart from the spectacular display of the watery world, the London Aquarium is committed to conservation efforts and as part of its commitment for conservation, the aquarium also operates a breeding programme which is managed by a team of marine biologists.

Variety of Fishes at London Aquarium
A bewildering variety of fishes like jellyfish, clownfish, sharks, piranhas, tangs to name just a few are on display at the aquarium. For the ultimate customer satisfaction, special events are held everyday at this aquarium. The sea shore in particular is often opened to the general public and you would do well to check with the Aquarium reception prior to your visit.

The London Aquariums is a privately owned aquarium, which is by far the world's largest collection of global marine life, and when combined with state of the art recreational facilities makes for a truly invigorating experience.

Robotic Fish - a Wonder Fish at London Aquarium
One of the star attractions of the London Aquarium is the Robotic Fish, which has been introduced at the aquarium, courtesy the Department of Computer Science, University of Essex.

The Robotic Fish has all the characteristic features of a natural fish like undulating movements, speed, acceleration and navigating skills. You will be mesmerized by the fish's ability to find it's way around the tank. It can even avoid objects and reacts to its surrounding environment. Needless to say, the Robotic Fishes introduced recently at the London Aquarium has become incredibly popular among the visitors.

This pioneering London Aquarium works in close collaboration with the Marine Conservation Society, The Shark Trust and The Orang Utan Foundation. The aquarium is spread across three floors. The core area tanks are located on the two subterranean floors and you have to climb a few stairs to reach there. At the hub there are two enormous tanks. The larger one houses Atlantic fauna while the other houses the Pacific Sharks. Around the outer barricade there are a few smaller aquaria representing a wealth of marine life.

Apart from the technologically advanced Robotic Fish, the incredibly beautiful Atlantic tanks wherein experienced divers can be seen feeding the sharks and other intimidating marine creatures during the feeding time.

If your idea of fun is to sip cognac in the company of sharks, it is absolutely possible. Increasingly people from the corporate world have shown a penchant for holding company events and seminars at the fascinating London Aquarium. You can chose a variety of settings - Rainforest, Atlantic or Pacific as per preference.

Just imagine being able to witness daring divers swimming along with the deadly sharks or, for that matter, being surrounded by luxuriant canopies of a quintessential Amazonian rainforest with gushing waterfalls. The excitement inside the London Aquarium is palpable and is a not-to-be-missed tourist landmark of London.