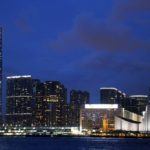 Hong Kong Convention and Exhibition Centre (HKCEC) is one of the major landmarks on the imposing skyline along the Victoria harbor front in the Wan Chai area of the Hong Kong Island. I walked all the way from my Hotel to Gloucester Road to visit this interesting landmark site which always remains crowded with locals and visitors. I could notice its peculiar aluminum and glass structure while I walked around its rear side to reach the front side which faced the harbor. This architecturally magnificent building has a huge glass façade along with intertwined aluminum structures. The rooftop of this building resembles a flying sea bird, as described by some critics. The HKCEC is one of the major exhibition and convention centers along with AsiaWorld-Expo. This world-class center hosts multiple trade fairs, important events, conventions/meetings, banquets and other special events, providing state-of-the art facilities. This place also has a historical significance. It was the backdrop against which the Handover ceremony of Hong Kong, a former British Colony to People’s Republic of China, thereby establishing it as a Special Administrative Region (SAR). This building is conveniently linked by covered walkways to nearby commercial establishments and Hotels.

While walking around this huge complex, a huge Golden Bauhinia flower immediately catches one’s attention, located on the right side of HKCEC; this place has a significant importance. The forever blooming Golden Bauhinia has been an emblem of Hong Kong, commemorating the Historical Event of Handover of Hong Kong to the People's Republic of China. Localities and visitors throng this popular spot by clicking their selfies and making each moment memorable. Evening time is even more interesting when hordes of photographers will entice you to get your pictures clicked against this fascinating Golden Bauhinia square. The HKCEC is also an important point from where one can catch some interesting views of Victoria Harbor and pass by ships, ferries, and boats. This place also forms an interesting backdrop for fancy photo shoots, fishing and relaxing, all the while enjoying a cool sea breeze.

Being an avid photographer, I was continuously clicking the ever changing skyline across Victoria Harbor front while the sun was setting against a blue sky. An Interesting display of lights on high-rise buildings against a dark sky looked so fascinating and memorable. Even if you are not doing anything and simply relaxing, you won’t feel bored as you have some interesting views around you to catch a glimpse of. While sipping a soft drink with corn chips, I too had a nice, relaxed and calm evening gazing at the night sky and watching the crowd pass by. It was now time to go back to my hotel and catch up on some sound sleep.