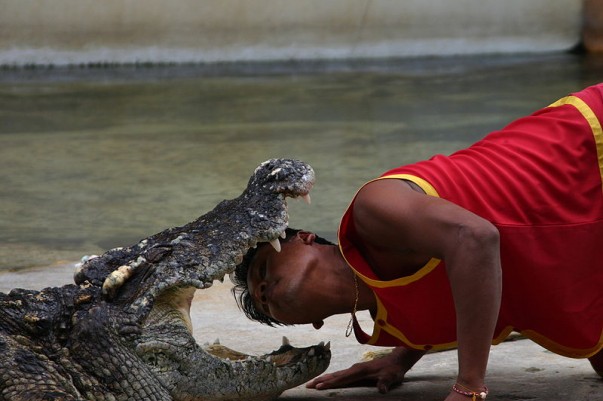 If you miss visiting the Crocodile Farm during your tour to Bangkok, you miss half the fun. Founded in 1950, the Crocodile Farm in Bangkok is an abode to more than 60,000 crocodiles of about 28 different species. Crocodile Farm has also made a place for itself in the Guinness Book of Records 1989 for having the largest captive crocodile named "YAI" that measures 6 meters in length and weighs around 1,114.27 kg. Watch both fresh and saltwater crocodiles playing and wrestling around in the adventurous Crocodile Farm and Zoo.

Speaking of the tragic side of the farm, one cannot forget the day when more than 4000 crocodiles escaped from the Crocodile Farm in the year 1995, causing a great loss. But fortunately, most of them were caught.

So, come and have a day out amidst crocodiles and other animals at the "Jaws and Claws" Crocodile Farm, truly one of the most exciting Bangkok tourist attractions.

Crocodile Wrestling Show: There is no end to the adventure one can get at the Crocodile Farm, Crocodile Wrestling Show is one of those things. Try wrestling with a three-meter crocodile in front of several tourists. But don't forget to be on a safer side by picking the crocodile that just had a great meal. You are sure to remember this wrestling experience all through your life.

Animal Zoo: Explore the huge Animal Zoo located inside the Crocodile Farm. There indeed is no better way to satisfy your curiosity of watching different animals like pythons, elephants, camels, leopards, lions, chimpanzees, tigers, monkeys and much more.

Photo By Evilarry (Own work) [CC-BY-SA-3.0 or GFDL], via Wikimedia Commons