Home / Tours / Changing of the Guards at Buckingham Palace

Changing of the Guards at Buckingham Palace 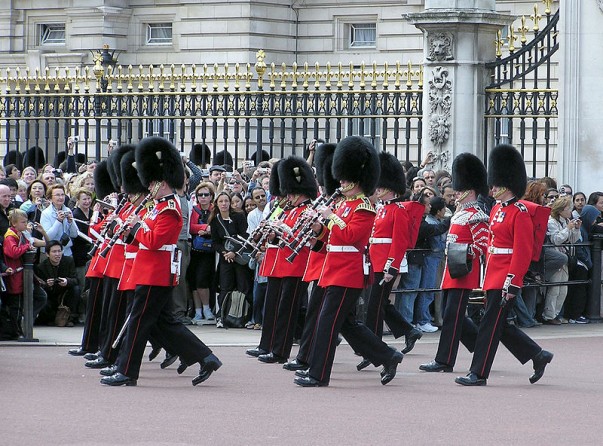 A trip to London is incomplete without a glimpse of the monarchical pageantry - the "changing of the guards" which takes place every day from 1st April to early July and every alternate day for the rest of the year. The changing-of-the-guards phenomenon has graced London's Buckingham Palace since 1660 and the Household Troops have guarded the monarch and the Royal Palaces.

The changing of the guard is a 45-minute display of the grandeur of Britain's monarchical tradition wherein the New Guard marches from its barracks at Wellington with a live band and the Old Guard hands over the charge of guarding the sovereign to the New Guard. The changing of the guard is a colorful display and the live band that accompanies the guard contingent plays both the traditional military songs as well as some of the contemporary pop songs.

An interesting point to note is that when the Queen is in residence, there are four sentries guarding at the entrance and while she is away, there are only two sentries. The guard's are conspicuous by their full-dress uniform consisting of red tunics and bearskins.

« West End of London Docklands - The New Face of London »