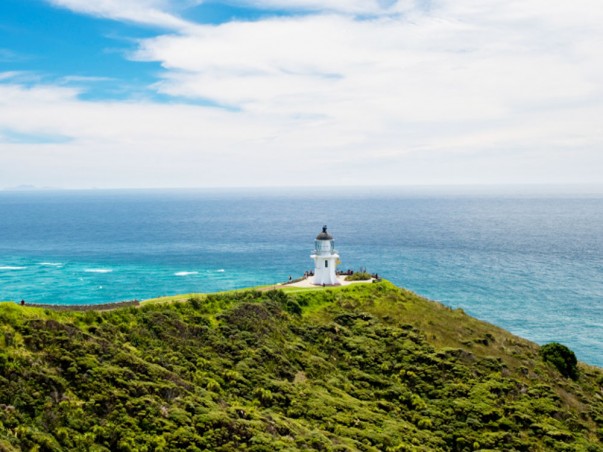 Cape Reinga is located in the North West region of the Aupouri peninsula, at a distance of about 100 kilometers to the north of Kaitaia. Abel Tasman, a Dutch explorer, named this cape in the year 1642. Cape Reinga is said to be a demarcation between the east Pacific Ocean and west Tasman Sea. You can watch the tidal race from the lighthouse when both these seas clash, thereby forming unsettled waters just away from the coast. Similar to Britain’s Land’s end, Cape Reinga too holds great spiritual and historic significance.

The cape derives its name from the Maori term Reinga implying the “Underworld”. It is also named as 'Te Rerenga Wairua', implying “leaping-off place of spirits.” Staunch believers of the Maori mythology hold an opinion that the spirits of the deceased travel to Cape Reinga so as to return to their conventional homeland i.e. Hawaiiki-a-nui following the Maori style funeral or tangihanga. It is also believed that they do so by using the spirits pathway or Te Ara Wairua. They are supposed to depart the mainland at Cape Reinga before which they turn at the Three Kings Islands so as to give a final look to the land. Cape Reinga enjoys a moderate climate and shares an equal balance of sunny, windy and cloudy days.

If you are on a way for a Cape Reinga tour then ensure planning your activities accordingly. Activities at Cape Reinga include outdoor recreation where you are free to enjoy anything and everything starting from enjoying the striking views, tramping, swimming, bird watching, surfing the waves, fishing, well the list goes on. The eastern coast of Cape Reinga serves as a home to sandy dunes and beaches meant exclusively for water sports, scuba diving, snorkeling and fishing. Some of the must sees in Cape Reinga include Cape Reinga lighthouse, archaeological sites and scenic reserves.

How To Reach Cape Reinga

Most travelers discover Cape Reinga by opting for the Twin Coast Discovery Highway that starts, as well as ends, in Auckland. The route allows you to discover both coasts, but driving can be tedious and lengthy as Cape Reinga is separated from Auckland by 425 Kms. A campervan is a remarkable way through which you can combine freedom with comfort. Active people with lots of time can try out adventurous options like cycling. However, in general, tourists can follow the on-road option by hiring rental cars to reach Cape Reinga or book air tickets - the nearest airport being the Kaitia Airport. Here you can board Air New Zealand flights operated by Eagle Airways to reach Auckland in just 45 minutes. If you are planning to fly from Other parts of New Zealand into Cape Reinga then it is advisable to fly in to Auckland or Whangarei which has excellent connectivity.

Know more about other Places to Visit in New Zealand here.