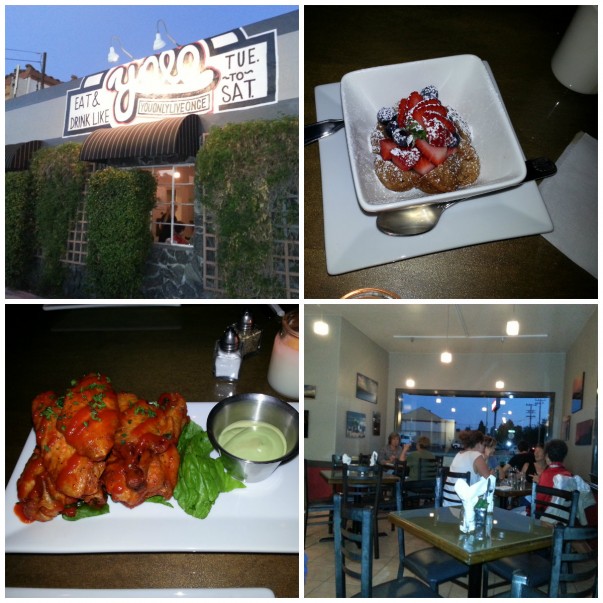 I am a huge fan of the remade Ocean’s Eleven series of movies. In the third one, Ocean’s Thirteen, a man goes into a restaurant in a fancy Las Vegas hotel, and asks for a table. He doesn’t have a reservation. Attempting to be friendly, he adds that he’s heard that their risotto is tremendous. The maitre d’, who takes arrogance, pretention and snottiness to new heights, looks down at him and archly responds “It is tremendous.” Then denies him a seat.

Ironically, in this scene, what the maitre d’ didn’t know is that the man he refused to seat in an obviously empty restaurant was a very powerful and important restaurant critic. I’m one, too (although neither powerful nor important) and very occasionally, I’m tempted to tell the people whose restaurants I’m reviewing what I’m doing. I never do, but my experience at Yolo was what I fantasize would happen if I did. Amazing, personal service and the very best food the kitchen is capable of turning out.

Yolo is a new restaurant on the Santa Cruz scene. It’s run by a group of people who have experience working in other people’s places, and having launched their own, are doing everything they can possibly imagine, and then some, to deliver a really good, memorable experience for their customers, who, for obvious reasons, they very much want to come back. The result is a wonderful dinner in a professional, attentive, very personal environment.

Running a restaurant is an incredibly hard, risky way to make a living. And the entire thing, ultimately, depends on your customers. If they come back, you’ve got a chance. If not, you’re dead. The team at Yolo obviously understands this. I got the strong impression that if I had told our server that what we really needed was for her to go out to the curb and wash my car, she would have sprinted out there and done it. They’re that committed. It’s that good.

Yolo is in a fairly unimpressive part of Santa Cruz – in a pretty small corner building, right next to the busy traffic of Water Street and across from, for example, an auto-parts store. There’s no parking lot, but there is free nearby on-street parking.

Yolo is small. I would guess there are twelve tables in the whole place, as well as a handful outside. It was also obviously launched on a budget, because while it’s really nice, it’s also decorated inexpensively. Whenever there’s an opportunity to do something nice without spending a lot of money, they do – water is served in jelly jars, for example. The whole place has been freshly painted. The tables don’t have linens, but they do have nice little napkins, creatively arranged. The whole effect is a combination of done-on-a budget and trying very, very hard. It’s really pleasant.

Really good, and VERY personal. For example, they whipped up a little custom dessert for my date, Beth, who can’t eat dairy products. The menu is small, so the server knew all about it. And for the first time in my history of writing reviews, the owner himself came out and chatted us up. It’s kind of like dining with a non-dysfunctional family.

REALLY cheap. $58 for two, including two drinks each and desserts. Because they felt like it, they knocked a little bit off the check, but even without that, this place is at least 30% below what any other decent place in the area would charge. It’s a screaming bargain, particularly given the quality of the food, which I’ll get to in a second.

The food is FANTASTIC. It seems to be basic American food, but done really, really well, and with kind of a gourmet touch. It’s a combination of creativity and down-home that really, really works.

For an appetizer, we ordered chicken wings. These are an American staple – you can find them in a million places, and they’re basically, usually, wings and small drumsticks hosed down in hot sauce and served with some sort of cheese-based second sauce to dip them in. They’re messy finger food – bar food, really.

Yolo, of course, made them into something much better, and more interesting. The hot sauce was based in Sriracha sauce, which is a hot Thai chili sauce, and then amended with some other ingredients. The wings were perfectly done, and nicely presented, along with a thoughtful (and necessary) pile of paper napkins. Delicious, and gone in about one minute.

For entrees, Beth ordered what the menu describes as pesto spaghetti. The menu accurately describes this as “Spaghetti squash pasta served with a no nut parmesan basil pesto and grilled seasonal veggies with a side of grilled garlic bread.” Imagine spaghetti squash run through a grater, and formed into sort of slivers, then baked (I think) in a mold with a really nice pesto sauce, and served with grilled vegetables and chicken or shrimp, if you want it. It’s basically a vegetarian dish, but with a lot going on, and a rich, complicated, but healthy result. This is really, really good vegetarian cooking.

I ordered turkey loaf – a healthier version of meatloaf. I love diner food, and this, like everything else at Yolo, began as something simple but was then raised a level, or two, or three into something great. Two slices of turkey loaf served with truly wonderful mashed potatoes and grilled vegetables. Most meat and/or turkey loaf comes with a simple brown gravy. Not here. Whatever they topped it with (ambiguously described as “Yolo sauce”) was a lot more complex, creative, and interesting, and the dish was a total success.

Finally, dessert. For Beth, they constructed this terrific improvised dessert that was kind of a strawberry shortcake – mini-muffins, with fresh fruit and powdered sugar. She describes it as “delightful.” I ordered, and enjoyed, three mini ice-cream sandwiches, made with homemade toffee cookies and each with a different flavor of local ice cream. Also great – a lovely finish to a great meal, and definitely not the chocolate-and-sugar bomb a lot of other restaurants tend to drop at this point. Even the coffee was great.

Yolo is not fancy. The menu has about fifteen items on it. The wine and beer list is simple. The location is kind of out-of-the way, and they’re clearly trying to make a lot happen with a little. How they do this, however, is with enormous amounts of creativity, expertise and attention. The result is a wonderful meal, in a very charming place, for a really low price. Highly, highly recommended.