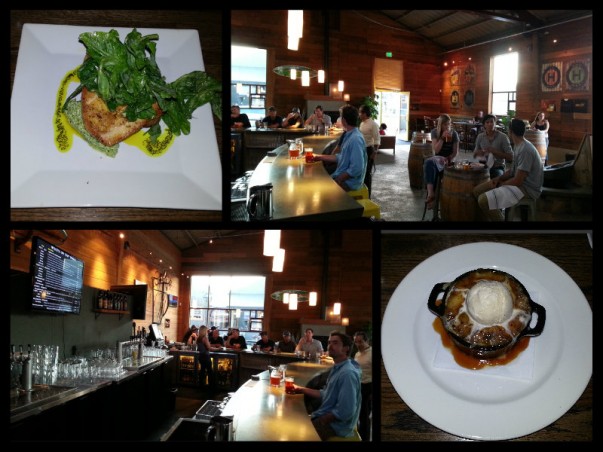 As John Donne famously wrote, “No man is an island.” First of all, what other restaurant review have you read, ever, that quotes John Donne? Second, no restaurant, apparently, is an island either. The West End Tap & Kitchen is the product of what seems to be a thriving restaurant ecosystem in Santa Cruz’s west side. It’s a great addition.

Bonny Doon winery’s new location is a stone’s throw away. So is Bantam, another of the very best new restaurants. A New Leaf Market isn’t far away, and the whatever it’s called charcuterie is also in the neighborhood. Some of these places are suppliers for West End, some simply set the neighborhood standard for food, cuisine and lifestyle.

Interestingly, and perhaps ironically, West End is in the building most recently occupied by the late, and much-beloved Le Cigare Volante, a restaurant project spinoff of the Bonny Doon winery people. Although that venture didn’t work out, the space is fantastic, and here’s hoping the West End will thrive where Bonny Doon’s project couldn’t. If the meal I had last night is any indication, they’ll do just fine.

Industrial chic, really. This whole area seems like it was originally small-time manufacturing facilities, so the floors are concrete, the ceiling are high and there aren’t a lot of windows. West End is divided into two sections – the front is more casual, and includes their massive bar. The back is for dining only, and includes an open-air kitchen in the back. It’s elegant, casual and industrial, and highlights a couple of enormous wine barrels – “enormous” meaning big enough to locate a table in for dining.

Smooth, professional, cheerful and casual. The service team included the owner’s silver Standard Poodle, who anxiously waited just inside the door for the owner to finish her dinner..

Moderate – $95, including drinks, a shared appetizer and two desserts. Portions are moderate also.

We began with the same thing we had at Bantam, just a slightly larger size – the charcuterie platter. This was sourced from el Salchichero, which is a new butcher shop located just around the corner. This is an interesting place – it’s essentially an old-style meat store, but focusing on using produce that is local, sustainably and humanely raised, and of the highest possible quality. The vendors they list are among the regional heavy hitters -- Marin Sun Farms, Paso Prime, Sunfed Ranch, Devil’s Gulch Ranch, Dirty Girl Farms, Route One Farm and Grounswell Farm. The platter is basically a sample of the best cured meats el Salichichero has to offer, including pastrami,peroni, dried beef and, I think, prosciutto, along with pickled cauliflower and mustard. Very nicely done, and a great, if salty, beginning to the meal. It’s fortunate this place offers about ninety kinds of beer. However – and maybe this is just sheer crankiness on me – as usual, this platter arrived with small slices of toasted

The first entrée was called Mary’s Heritage Chicken, and consisted of a grilled chicken breast along with English pea, mint and ricotta puree, roasted red potatoes, pea shoots & lemon vinaigrette. This business with the puree is interesting – I’ve seen it done elsewhere. Instead of a starch, or something like potatoes, the dish is built on a puree – sometimes root vegetables, sometimes a combination of things. It makes the dish lighter and more interesting, and supports the vegetable element. In this case, the savory of the chicken was counterbalanced by a lemon vinaigrette, which was great. This is tricky – if you overdo it, you end up with kind of a hunk of sour meat. In this case, it was used as a perfect accent, and worked really well.

The other entrée was Asparagus Primavera, which was the chef’s demonstration that, yup, he knew how to handle pasta. In this case, it was Bergamont orange and black pepper tagliatelle, chardonnay citrus cream & nasturtium leaves. This dish was perfectly done – the pasta was exactly the right amount of al dente, which gave it some heft – and the saucing wasn’t overdone, which gave the whole enterprise some heft and some body. Great.

Dessert was, first, a chocolate tart, a lovely little square offering with two kinds of sauce, beautifully applied – one of those tasteful little desserts that is partially painting. The Audrey Hepburn of tarts. The second dessert was a bread pudding, which came in a very small cast-iron kettle that was stuck into the over to finish. This was the Mickey Rooney of desserts – sweet, friendly and cute. Both were good, albeit very different, and along with individual servings of French press coffee, really nice.

The West End is a place that leans very heavily on its ingredients and sourcing, and then really leverages them. Basically, the dishes are simple, the ingredients are the best available, and the result is an excellent meal.