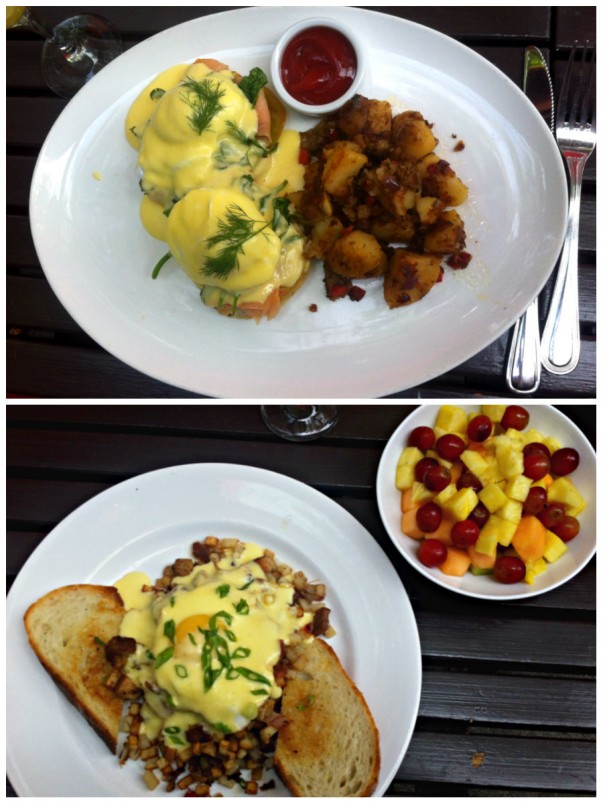 The Red Rabbit is a trendy spot in Midtown Sacramento, popular among twenty- and thirty somethings looking for fun and a fancy drink. This place had been recommended by a friend who frequently hits up the Red Rabbit for dinner and happy hour. Not only are there interesting offerings for food and drinks, this restaurant has a strong focus on locally sourced and house-made foods.

We decided to try brunch at the Red Rabbit, since none of us had tried it yet and the options looked great – the menu items are funny and playful. Plus, they offer a pitcher of mimosas for just $6.

The Red Rabbit is located in Midtown Sacramento, set among other businesses as well as residences. Street parking is available, mostly at metered spots, and there are parking garages nearby.

The Red Rabbit's atmosphere feels like an urban, trendy, upscale bar and restaurant, that may be more bar than restaurant. Around noon on a Sunday when we arrived, the brunch crowd had already subsided, and the interior of the restaurant was dark and lit with ambient light. Exposed brick and dark colors decorate the inside, along with art featuring red rabbits everywhere you look. The restaurant is definitely geared towards the night crowd, with a cool lounge vibe. However, the weather was great and not too hot for Sacramento, so we opted to eat outside on the spacious patio.

The servers were polite and cool, and our small group had no issues with service. They did, however, add gratuity onto our tab, even though there were only six of us. They also didn't split the tab for easier paying, but that seems to be the norm around here.

You can't beat a $6 pitcher of mimosas – it came out to $1 per glass for our group, which is an incredible price. The food was on the high end of average, with brunch entrees ranging from about $8 to $12. In the evenings, however, drinks get pricey at over $10, but they do offer some creative concoctions.

Among the whimsical menu selections were the Green Eggs and Yams and the decadent Creme Brulee French Toast, both of which I seriously considered. Instead, I couldn't resist the Hangover Helper, because aside from its hilarious name, pork belly and bacon hash with an egg and housemade hollandaise sauce sounds delicious. I was fortunate enough to split that entree with my friend's order of Eggs Benedict, so I got to try something else, too. The Hangover Helper was wonderful – crispy potatoes, pork belly and bacon paired perfectly with a fried egg – and I could see why it'd be just what the doctor ordered for the morning after. The hollandaise sauce was creamy and a little tart, and was some of the best I've tasted. That's fortunate, because it also topped the Eggs Benedict, constructed of an English muffin, egg, tomato, spinach, and smoked salmon for a little twist. The only problem was that this dish came out cold, which certainly knocked a few points off that meal. Otherwise, the dish had potential. It was also served with a side of country potatoes, which were tasty, but not as good as the hash on my plate.