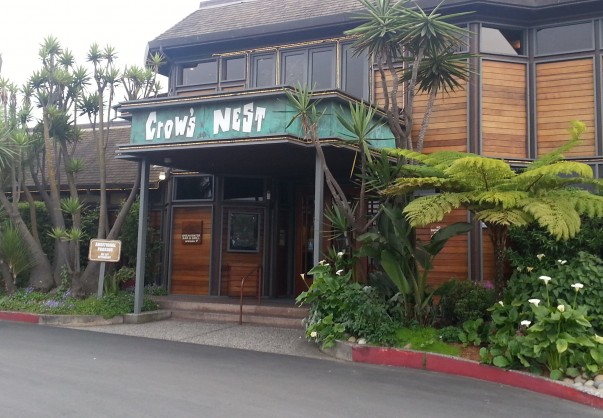 The Crow’s Nest at Santa Cruz

If you walk down the breakwater in Santa Cruz towards the lighthouse on a summer night, you often can look across the harbor and see an enormous party going on at the Crow’s Nest. There will be a couple hundred people on the beach, a band, lights, music, raucous laughter and all sorts of fun going on. It’s visible (and audible) for half a mile. If you live in Santa Cruz, this is a very familiar sight.

Every beach town has a place like the Crow’s Nest. The big, fun party place. Everyone knows about it, it seems like it’s been there forever, writers often write stories about it, people talk about what happened there, and it becomes an institution. The Crow’s Nest is like that. Big, fun, energetic – and with surprisingly good food.

The Crow’s Nest is located on the south side of Santa Cruz harbor, right on the beach. There is plenty of parking in the harbor parking lot, but it’s not free, so be prepared to pay.

(also open for breakfast and lunch)

The ambience at the Crow’s Nest is that of a big, energetic singles bar, basically. There are dining areas on both the ground floor and the second floor, both with heated, enclosed balconies. The balconies have fantastic views of the harbor, so you can watch boats come and go, harbor seals, pelicans and all the other waterfront action. All in all, it’s very nice, although a little 70s-seeming --different levels, brass railings, patterned carpet. It can also get very noisy, particularly if there’s a band playing. 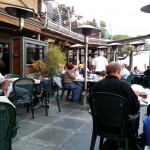 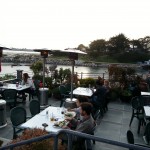 It is good, although it can feel rushed sometimes. There’s a lot going on and an army of servers, so they are very efficient, if a little brusque sometimes. One thing that happened to me was my entrée arrived without a fork, which meant I had to sit and look at it for a minute until I was able to get the server’s attention.

Moderate, leaning towards expensive -- $94 for two, before tip, including drinks, a split appetizer and a split dessert, and coffee.

As an appetizer, we began by splitting an order of smoked salmon. This was a pleasant surprise. I was expecting what you would get in New York City on a bagel. What I got was a very different.

It was fresh salmon, cut into chunks and smoked over an alderwood fire and served with wasabi-mayonnaise. The result of this was pieces of salmon that were somewhat drier than traditional smoked salmon, which was not a bad thing. This smoking gave them a tangy, barbecue flavor, which went beautifully with the wasabi, and they had some body to them instead of the somewhat-mushy smoked salmon. This appetizer also turned out to be a surprising amount of food – very generous portions. Enjoyable, and different.

My entrée was Nova Scotia Sea Scallops, described as “half a dozen scallops seared with a rosemary-cumin crust and citrus glaze, and served over sauteed spinach with jasmine rice.” Although a little oversold, this was basically what I got and it was very good. The scallops were terrific, large, very fresh and perfectly glazed. The “jasmine rice” turned out to be plain white rice, and the rest of the meal was simple steamed vegetables with the promised sautéed spinach. Overall, however, a really nice dinner. I like scallops a lot, and whoever prepared these knew what he was doing.

Beth had a prawn salad. This was interesting, and quite good. It was a simple, large green salad dressed up with strawberries, prawns and cubes of cheese. The overall effect was surprisingly rich, and the strawberries were a nice contrast to the other ingredients. Highly recommended – really good.

Dessert, which we (fortunately) split was strawberry shortcake. Because I grew up in the country, where strawberry shortcake is taken seriously, I am a little bit of a purist about this dessert. What I remember from my childhood is basically a homemade biscuit, with strawberries on it. No whipped cream, no frills, no touchy-feely. Just strawberries on a biscuit. The Crow’s Nest took the opposite approach. What we were served was more of a cake, to which had been added vanilla ice cream, a lot of strawberries and a sauce. I think I can find it in my heart to forgive them however. This was a really good. We ate it all up.

The Crow’s Nest is not a place you would think of for gourmet dining. It’s big, loud and fun. It’s right on the beach. It’s a beach town party place, and well-known for that. However, the food there is actually really good, and despite having an army of servers, four different dining areas, a bar and hundreds of customers, they managed quite well. Plus, you can’t beat the view. Santa Cruz harbor at sundown is pretty spectacular, so for these reasons, the Crow’s Nest is recommended. 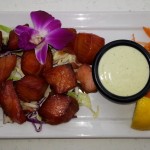 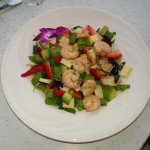 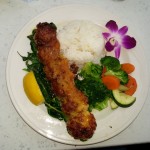