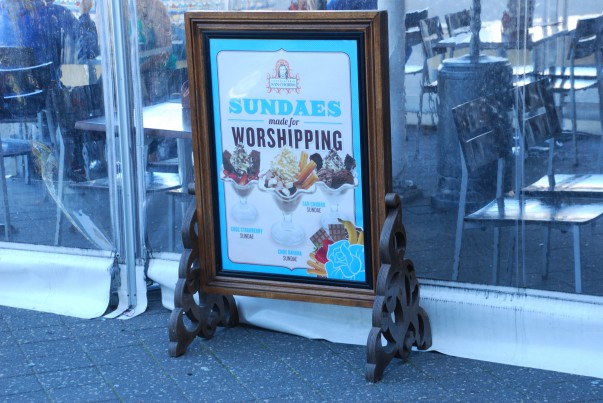 The devil lies in the detail. Which sundae are we talking about?

There were no worshipers having their Sundaes when I passed by, but that was not to be a deterrent for me. I was not hungry, I had resolved not to eat an ice-cream for at least a week and I had lots to do, but this board won't allow me to move. I told myself that I was here to see the beach, not to eat a sundae, to no avail.

There I was, literally worshipping my Chocolate Strawberry Sundae. My experience was heavenly but my learning was also extraordinary. The lure when presented through gross is most effective. If it was subtle, I am sure I wouldn't have made this purchase. I told myself I will take an hour to finish and that helped me in discovering more of the Bondi neighborhood.   Over 30 photographs which wouldn't have been captured otherwise owe their existence to this display board.

How much: $14 with everything

They claim to be the finest when it comes to playing around with chocolates in Australia. I won't dispute that.

You may also like : Top 10 things to do in Sydney