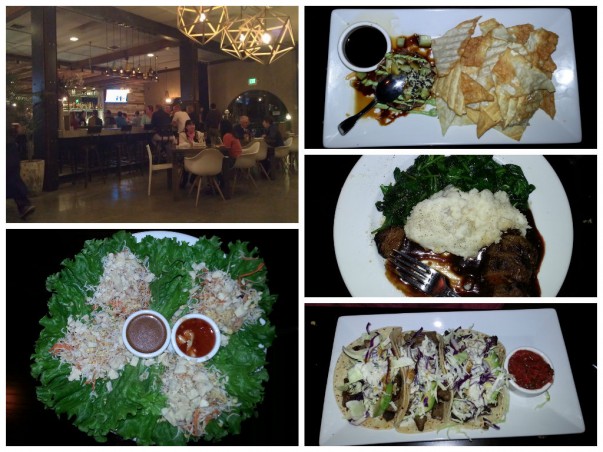 Suda is a great, big, huge, giant surprise. It looks like it’s going to be sort of run-of-the-mill. The restaurant is one big concrete box, with some arty touches for décor, but nothing special. The menus look kind of limited, and in what may be a detail, but I think a telling one, they’re kind of worn – stained, a little dog-eared and so on. The location is even sort of uninspiring. It’s in kind of a strip-mall-y area, with zero charm – the absolute opposite of a destination place like, say, Shadowbrook.

All of these things are completely misleading. Suda is a gem. The food is great, the service is great, and there is real creativity at work in the kitchen. We had dishes unlike anything we’d ever tried before, they were all good, and even the décor turned out to be elusive. For example, I cannot stand really loud restaurants, and given that it’s a grey stone box, Suda looks like it’s going to be just that. But if you look carefully, there are sound-absorbing tiles in the ceiling that are exactly the same shade as the stone, thus quieting things down considerably.

Suda is a Romanian word meaning various versions of “unite” or “join.” It should mean “surprise.” This place was very surprising.

Suda is on Portola Drive, about ten minutes south of Santa Cruz, and south as well of Pleasure Point. It’s right on a parking lot, so there’s plenty of free parking.

Really interesting. Again, it is a big concrete box, but with lots of carefully-thought out touches that transform it. Whoever decorated this place knew his/her stuff. Eames chairs, geometrically sculptured light fixtures, cool retro light fixtures. And Suma is roomy – the tables are reasonably spaced, and there’s none of that cheek-by-jowl feeling over other sardine-can places. Both retro and modern, fun and nice.

Great. The servers work in teams, and they really know the menu. I was going on, in kind of rapture, about my meal, and the server was telling me that the employee’s version of that, which added mushrooms, was especially incredible. Interestingly, our server, who was very personable, does several things in addition to waiting tables – welder, driver, and caregiver for an elderly woman. Interesting, and enterprising. We like enterprising.

Moderate. $96 for both of us, including drinks and a shared dessert. The portions are really big – I’m finishing off one of the dishes for lunch as I write this.

Great, and even better, interesting.

The first appetizer we ordered was the “Pepper-Seared Tower of Tuna” – I had no idea what that was going to be. It sounded sort of dirty. What it turned out to be was this amazing sort of salad. The heart of it was pepper seared tuna, cucumber, pickled ginger, and avocado combined, and put into a ring mold, so you got this literal tower of stuff. It was served with handmade coriander won-ton crisps, sweet soy and wasabi sauces. Essentially, it’s a combination of a really original, really good sort of Salad Nicoise with homemade chips and two kinds of sauce. It’s wonderful, and I’ve never seen anything like it.

The other appetizer was a plate of lettuce wraps, also unlike anything I’ve ever seen anywhere. These are for lettuce leaves, inside/on top of which is a scoop of a combination of ginger, fresh lime, toasted coconut, peanuts, red onion, carrots, rice noodles, spicy peanut sauce or Thai chili sauce and, if you want some protein, chicken. Also great – refreshing, complicated, and another example of the chef blending ingredients to get just what he wants, then presenting it in an unusual, novel way. By the way, if you’re into the entire lettuce-wrap thing, and you’ve been living under a rock in California for the last, oh, twenty years, In and Out burgers will make you the same kind of thing if you ask for your burger “protein style.”

Okay, on to entrees. Mine was the hanger steak, which was also great. Hangar steak is a fairly cheap cut of steak that’s seasoned, grilled, sauced with some kind of demi-glace, usually, and presented with mashed potatoes and, in my case, sautéed spinach. Interestingly, it was almost the exact same thing I had at the restaurant I reviewed the week before. Meat, potatoes, veg. I am obviously falling into a rut. Anyway, it was great – hearty, rich, beautifully executed.

Beth ordered fish tacos. What arrived were three four tortillas, inside of which was fish, shredded cabbage, Süda sauce, mango chutney, black beans and Indian spices. In other words, the old California warhorse, the fish taco, done with an Indian twist. Really good – flavorful, plentiful, and once again, unlike anything I’d ever had before with a lot left over.

Dessert and coffee were also great – an enormous apple crisp, which was delivered along with what looked like a pile of ice cream and perfect coffee.

Bottom line: Not at all what it looks like. Creative, plentiful food, great service, and truly original.