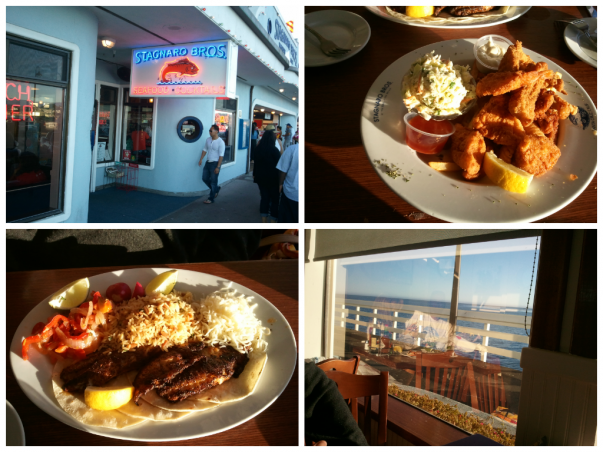 Stagnaro Bro's : Is it a Classic?

Stagnaro’s is a Santa Cruz classic. It’s been in operation since 1947, and is still run by the original family. It’s right on the Municipal Wharf, and in good weather, the views are incredible. That’s the good news. The bad news is that it dishes out high-volume, mediocre seafood for tourists. In short, although the ambience is energetic and fun, and the scenery is awe-inspiring, the actual food is definitely not something to write home about. Which requires a little explanation.

One of Santa Cruz’s main economic engines is the Beach Boardwalk, an amusement park that has been in operation for over a century, right on the beach. During the summer, hundreds of thousands of tourists, mostly from Central California, flock there. These are families from Fresno, Stockton, and Modesto. They come to escape the heat, to eat cotton candy and ride the rollercoaster, and so on. At the end of the day, they need to be fed. So they come to Stangaro’s, which is on the Santa Cruz Wharf, and within sight of the Boardwalk.

But this is not a crowd, to be blunt, that is going to spend a lot of money on a meal, or who are particularly fussy about the quality of their dining experience. They want to get the kids fed, get out, and get on with their evening. This is the market Stagnaro’s caters to, which means that the food, while not actually bad, isn’t any better than it absolutely has to be. This is tourist food, and it tastes like it.

Stagnaro’s is on the Santa Cruz Municipal Wharf, along with several other similar restaurants. The wharf has access-controlled parking, for $3 an hour. Off-season, there is plenty of space, but during the summer, you may have to wait and/or compete for a space.

The interior of Stagnaro’s is nice. It’s flooded with light from the bay. The walls are white, the floor is hardwood, and there are lots of old pictures of the Stagnaro family on the walls, along with all kinds of nautical stuff – leaping swordfish, portholes, and so on. It’s busy, and crowded, and noisy, and if, like me, you’re a sucker for this kind of classic, old-time American restaurant ambience, it’ll seduce you. Since it’s right on the bay, the views out the windows are incredible – it’s you and Monterey Bay, about ten feet away.

While the view is lovely, the crowd isn’t always. These are, again, tourists from central California, and not all of them are exactly enchanting dinner companions. When we ate there, the next table over was a big family, where the men’s idea of dressing for dinner consisted of trucker hats, sunglasses (worn during the meal), goatees, a wife beater t-shirt, and a LOT of tattoos. Plus a high-volume discussion of beer, who was going to sleep where, why someone’s wife had left him, and did I mention beer? This isn’t Stagnaro’s fault, but you should know what you might run into.

Efficient and friendly, but also kind of accelerated. Things get done quickly, but this is a place where they want to turn tables, so you are not exactly encouraged to take your time or linger.

Reasonably priced -- $44 for two, including one drink each. The portions are large.

Just not that great. I ordered the “Seafood Treasure” which (this was my big mistake) was a selection of deep-fried stuff – a prawn, calamari, a scallop, clam strips and other unidentified “fresh fish.” It comes with a cup of chowder, fries, cole slaw and bread and butter. Everything, in fact, comes with really good rolls and butter.

The chowder, to begin with, was almost tasteless – hot, yes, but gelatinous, and obviously ladled out of a big cauldron, plopped into a cup, and sent out. Thank God for oyster crackers! The “Seafood Treasure” was a sort of disappointing, breaded/fried pile. Some of the pieces were hot, some were lukewarm – i.e., had been dunked in oil a while ago, and left to sit under a heat lamp. The “fresh fish” was obviously whatever random pieces the cooks had sitting around that had been breaded, deep fried and thrown onto the pile. All of this sat on the plate next to a pile of the kind of French fries you get in an American school – thin, slightly soggy, and kind of oily. The cole slaw, which had obviously been scooped out of a five-gallon bucket with an ice-cream scoop, was watery, and almost tasteless, except for the marshmallow-y flavor cole slaw acquires when it’s manufactured by the ton in some plant in the Midwest.

We also ordered the fish tacos. These came with a salad, which reminded me of a picture from a children’s “Learn Your Food Words” book. This would be the picture that came to teach children the word “salad.” Iceberg lettuce. Croutons. Slivered carrots. Dressing. Done.

The tacos themselves were decent, but unremarkable – the fish was blackened snapper, which had been heavily seasoned with something spicy, then pan-fried. While this isn’t necessarily bad, it’s also an excellent way to disguise the taste of second-rate fish. The tacos included rice, cheese, and an onion and red pepper mixture, served on a tortilla. The taco was good, but not anything special – you can get basically the same thing at any taqueria in Santa Cruz.

I’m kind of of two minds about Stagnero’s. Our meal wasn’t that great. If you need to feed a bunch of kids in a hurry, and don’t want to leave the beach, then Stagnero’s is as good as anywhere, although not better. However, they also have a big menu, with a lot of items on it, and I think that some of their other offerings might have been just fine. Perhaps we just ordered the wrong things. However, if they can’t pull off the basics, it makes me wonder about something trickier.