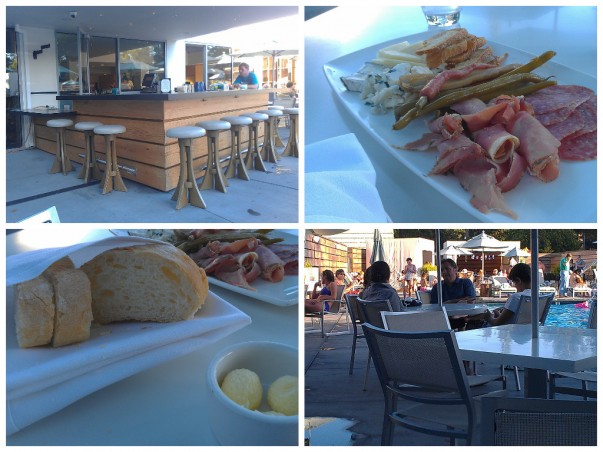 Not that long ago, what is now the Paradox Hotel, in Santa Cruz, was, to put it sort of gently, a dump called the University Inn and Conference Center. Described as sort of a hotel for college students and guests affiliated with the University of California at Santa Cruz, this place featured a depressing lobby with shag carpeting, a “Welcome” doormat, and Kiwanis Club gumball machines.

Almost exactly a year ago, this place, redecorated, rebuilt and relaunched, opened on Ocean Street. Now modern, elegant and more than a little chic, the new hotel instantly became one of the nicer places to stay in Santa Cruz, with an attached restaurant called Solaire. Solaire more than lives up to the standard set by Paradox – it’s a great place to eat.

Solaire/Pardox is on Ocean Street, just as you enter town. The hotel has its own parking lot, which includes valet service, so parking’s no problem.

Lively, modern and fun. There seems to be an enormous serving staff, who also seem to be college students, so there’s a lot of cheerful energy. There are two dining areas – inside, and then out on the patio by the pool, which provides the best floor show imaginable. During our meal, there were families, visitors from what seemed to be Japan and Italy splashing around, kids, young people – everyone.

Reasonably attentive, but a little amateur. As I said, there were at least four different people serving our table, and sometimes they got a little confused and/or took a long time to appear with something we requested. Also, the entrees took forever to arrive, despite the place being far from full. However, everyone was trying pretty hard, and it wasn’t bad.

Really, really good. Like, amazingly good, considering that this is after all, a hotel.

Before getting into the specifics of the meal, it’s worth making a few observations about the Santa Cruz area. The city of Santa Cruz is located right on Monterey Bay. Fishing boats still use the harbor, and the surrounding towns – Watsonville and Salinas, for example – are at the northern end of California’s famous agriculture area. In short, there is fresh produce, seafood and meat everywhere around Santa Cruz, and this bounty plays a major part in what Solaire delivers, which is simple, fresh, remarkably good American cuisine.

We began by splitting an antipasto plate. The presentation was lovely – crostini, pickled carrots and beans, salted ham and specialty salami, and two kinds of cheese, beautifully presented. Simple and good, and exactly the right way to launch a meal.

One ordered entrée was a simple steak – an 8-ounce sirloin, with green beans, potatoes and a straightforward red wine reduction sauce. I love steak, and I have had a lot – a LOT – of screwed up steaks in my life. Either they’re overdone, or they’ve obviously been frozen and thawed a few times, or you have a cheap, basically inferior cut of meat dressed up with some kind of rich sauce to hide what’s really going on – the proverbial pig with lipstick.

This was different. It could not have been simpler, and it could not have been better. The green beans were fresh, local, cooked but still crisp. The potatoes – what we used to call “new potatoes” were tiny, and perfectly done, and simply seasoned with salt and pepper. The steak was perfect too – done just right, and obviously seconds off the grill. Ultimately, there isn’t a lot to say about this dish. It’s the kind of thing an American family would serve a guest during a summer dinner – the best ingredients possible, simply and informally prepared, and to my mind, a fantastic meal.

The other entrée was a grilled halibut filet, served on a bed of pureed cauliflower, with selection of diced, sautéed vegetables. The overall result was similar to the steak. The halibut was incredibly fresh – I suspect it had just been pulled out of the nearby bay – and had no fishy taste or odor at all. The puree was light, and healthy-tasting, and really, really good. Again, simple ingredients, expertly prepared, and straightforwardly presented.

Finally, dessert, which was a terrific blueberry bread pudding. It’s hard to write about this without lapsing back into the same terms, but they’re apt – simple, fresh, delicious.

Unlike France, or India, or Mexico, the United States often doesn’t seem to have a particularly distinctive native style of cooking. American food always seems to end up being hamburgers and French fries (thanks, McDonald’s) or other similarly dubious dishes. Yet, what this country does have is the biggest agricultural industry in the world, and despite all the horrors that we’ve inflicted on the world (Honey Boo-Boo, drones and Muzak spring to mind) this is still a country of farmers, of produce, and of incredible, fresh ingredients. Which, if you know how to use them, as Solaire does, will produce meals that, simple as they are, are among the best in the world. We know how to grow stuff, and we know how to cook it. Hopefully, you know how to eat it.