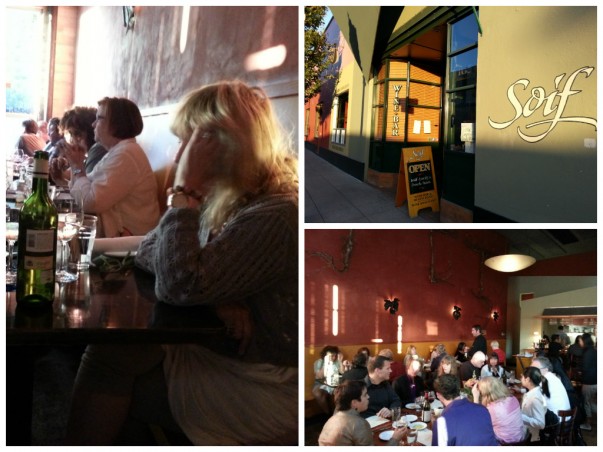 This part is easy. As far as I can tell, Soif is the best restaurant in Santa Cruz. I may be wrong – there may be others I haven’t discovered – but hands down, the food there is head and shoulders above anyone else’s. If you want a great meal, go here.

Soif is an interesting setup. It’s one part restaurant, one part wine shop. As you enter, the restaurant is on your left, and the wine shop is on the right. Accordingly, every dish is paired with a recommended wine, and wine is a big deal in this place. Unfortunately, since I’m sort of the exact opposite of an oenophile, I can’t really comment on the wine list, selection and whatnot, but I’m sure it’s great.

However, foodwise, this place is the real deal. This is real cuisine, prepared by a real chef, that looks good, tastes amazing, is composed, seasoned and plated expertly and isn’t simply dressed-up mediocrity. Also – and this will sound trivial, but I don’t think it is – they’re not afraid to use salt here. One of the things that drives me nuts in other restaurants is the sheer blandness of a lot of the food. It sort of tastes like nothing. Not here. Better yet, a LOT of their ingredients – paste, mousses – are actually made on the premises.

The restaurant is right in downtown Santa Cruz. Although there is limited on-street parking, which is metered, there several large lots and parking garages within a few blocks. Bring money – none of these are free.

Soif (which, by the way, means “thirst” in French) is on Walnut Avenue, just off Pacific, which is Santa Cruz’s main commercial street. The main dining room is high-ceilinged, with a kind of contemporary industrial feel. The room is deep, and the windows are relatively small, so despite a skylight, the place tends to be very dark, which is fine. At least when we were there, it was also absolutely packed – this is a busy, popular place. Interestingly, however, the industrial décor extended to the tables, which had no linen – just plain, flat wooden surfaces, with screws countersunk into their surface. Interesting, but also kind of ugly.

Service is good, but the meal took a long time, because the kitchen seemed to be slow. This isn’t really the servers’ fault. Food arrived as soon as it was ready, but “ready” sometimes took a while. However, the servers were attentive, coordinated and professional. There was some mixup with the dessert ordered by the couple sitting to our left, and the waiters addressed and resolved it instantly, leaving everyone happy.

Expensive -- $95 for two including drinks and desserts. Relatively small portions – this is gourmet food.

Classic French cooking, with a modern twist. Abundant bread and olive oil, by the way, is provided.

We began with the Charcuterie Plate:  House-made chicken liver mousse, wild boar salami & spicy coppa. This was really nice, and included mustard, cornichons, and a sliced pepper, along with some toasted bread. Everything was artfully arranged on the plate – it was pretty – and tasted great, particularly the mousse.

Our other appetizer was the salad of mixed lettuces with peaches, Point Reyes blue cheese and honey Dijon vinaigrette. This was a lovely, balanced salad, with the sweetness of the peaches perfectly set off by the local blue cheese and the vinaigrette. The lettuces were obviously just hours from the farm where they were grown, so the entire salad was wonderful.

For entrees, we first ordered the confit duck leg. This came with poblano pepper potato hash, roasted cherry tomatoes, and green beans. This was simply marvelous. The duck leg itself was absolutely flawless – perfectly seasoned, crisp and wonderful. The hash was a shaped in a form, and was light, and a nice complement to the vegetables. The green beans were done in the classic French style and were crisp and fresh, as were the roasted tomatoes. The tomatoes were a revelation – roasting preserves almost all of their flavor, and bursts their skins, creating a tart, almost fruity counterpoint to the richness of the duck. Fantastic.

The other entrée was the house-made pappardelle with cannellini beans, roasted mushrooms, bread crumbs and Parmigiano-Reggiano. The is the kind of pasta dish it’s easy to screw up – bread crumbs, beans and cheese make it easy for it to be a soggy, chewy mess. It wasn’t. It preserved the savoriness of the ingredients, particularly the mushrooms and the pasta, without being too heavy. The interplay of flavors was perfect.

Dessert was good, too. Fresh ice cream and two small round plum cakes. As always, perfectly seasoned, sweet, light and just right. The coffee that came with it is worth a special note. Decaf coffee is sort of the red-headed stepchild of restaurants – it’s often an afterthought, and therefore weak, bad or stewed. Ours was none of the above. It was freshly made, and really, really good.

Again, this is serious cooking. Bring your wallet – it isn’t cheap – but it’s worth it.

« Dubai Creek The Great Pyramid of Giza »
One Comment